A quick reminder that the release of AUTUMN: INFERNO is now just one week away. 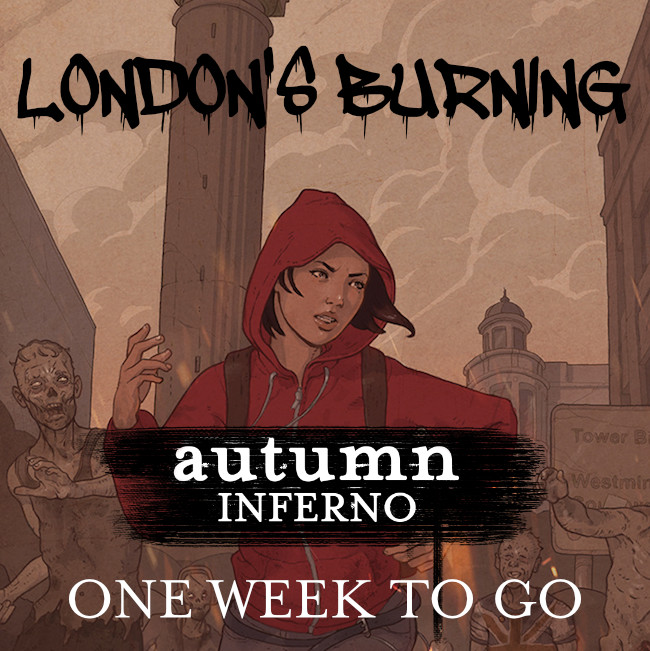 Population seven million
99.9% of them dead
The survival of the rest still balanced on a knife-edge

Pre-order links are now up and running, with the German and audio versions in production as I type:

For those who’ve ordered signed editions, they’ll start shipping in the next couple of days. There’s still time to order limited edition hardcovers (with bonus material) or signed paperbacks. Place an order today, and you can download and start reading a complementary eBook version of INFERNO immediately. Click here for more information.

It’s less than three weeks now until AUTUMN: INFERNO is released. I thought you might like to read an excerpt. The book opens with an army of survivors setting out to reclaim the streets of London from the dead – the battle of Wapping. Click the link below to read it.

You can read the entire novel today if you pre-order a signed copy from Infected Books. Otherwise, there’s not long to wait now. You can pre-order the eBook, and print pre-order links will be appearing shortly. Aubrey Parsons is busy at work recording the audio version, and the German translation is in Jasmin Kraft’s capable hands.

Can’t wait for you to read this one. And while you’re doing that, I’ll be hard at work on AUTUMN: EXODUS. The last book in the series will be nothing like you’ve read before.

First, the eBook version of the book is now available to pre-order from all the usual outlets – Amazon, Apple (due imminently), Kobo, Google, and B&N. The general paperback pre-order links should start popping up in the next couple of weeks. 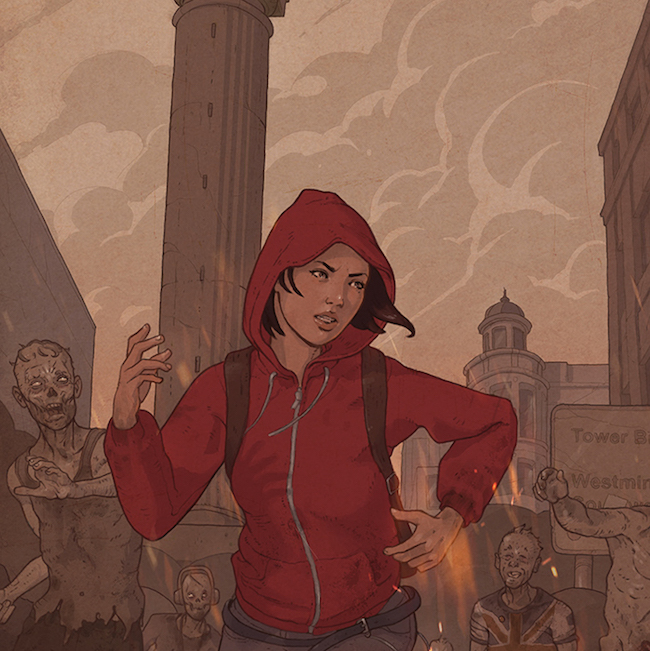 Second, if you’ve already pre-ordered AUTUMN: INFERNO direct from Infected Books, either the limited edition hardcover or signed paperback, you should have received an email from me yesterday with details of how to download your complementary eBook copy RIGHT NOW! Please get in touch if you didn’t receive the instructions, and I’ll get the details to you asap.

There’s still time to pre-order signed copies from Infected Books, and now that the eBook is available, you’ll be able to download a copy straight away.

It’s my last afternoon in the office before I pause for Christmas and the New Year, so I thought I’d take this opportunity to wish everyone the very best for the upcoming holidays. We’ve all had a difficult couple of years, and whilst I don’t think for a second that we’ll be completely out of the woods in 2022, I’m cautiously optimistic that – if we can hold ourselves together and resist the urge to dive down media-fuelled, conspiracy theory laden rabbit holes – things will start to improve.

The offer – in anticipation of the release of AUTUMN: INFERNO in January, the eBook version of AUTUMN: DAWN is available for 99c/99p from all your usual eBook outlets. If you haven’t started reading THE LONDON TRILOGY, this is a great way to start.

The reminder – limited edition signed hardcovers and signed paperbacks of AUTUMN: INFERNO are available for pre-order from Infected Books. They’ll be shipping from mid-January, and anyone who pre-orders will receive a complementary ebook version of the new novel in advance of its official release on 25 Jan. If everything goes to plan at this end, you could be reading the book before the end of 2021 (ie next week).

The recommendation – have you seen ANNA AND THE APOCALYPSE? It’s the best Scottish Christmas zombie musical I’ve ever seen. Cheesy as hell, but a lot of gory fun and it’s well worth a watch. The trailer is below and if you’re in the UK, you can stream the movie now on Amazon Prime.

There’s lots of good stuff coming up from me, so I hope to see you soon in 2022. In the meantime, Happy Holidays!

Just a quick post to advise that THE BLEED: ARMAGEDDON is finally available in print as well as ebook and Audible exclusive audiobook. Apologies for the delay! 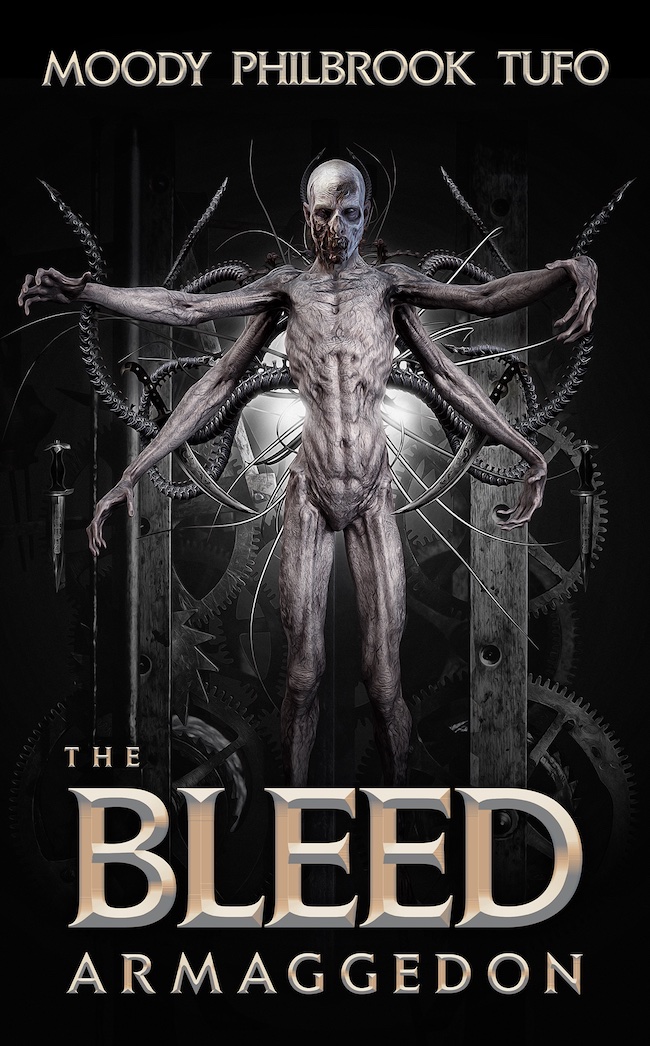 So, AUTUMN: INFERNO is with my editor and I’m busy outlining the final book in the series – AUTUMN: EXODUS while the events of book two are still fresh in my mind. I’m pleased to advise that you can now pre-order limited edition hardcovers and signed paperbacks of AUTUMN: INFERNO direct from www.infectedbooks.co.uk. Click here for more information. 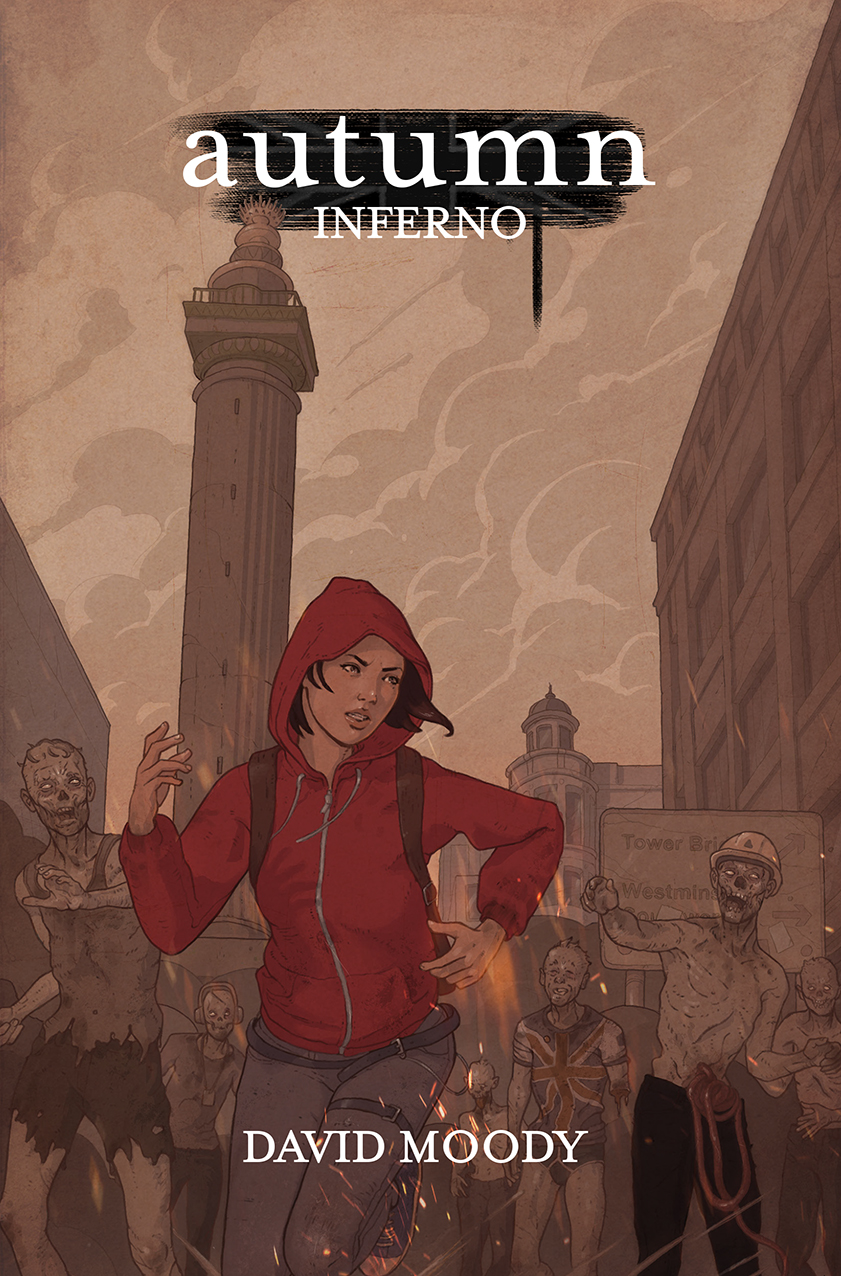 eBook, audio, and general print pre-order details will be announced shortly. In the meantime, don’t forget that if you order a signed copy of INFERNO from www.infectedbooks.co.uk, you’ll receive a complementary eBook version before the book’s official release on 25 January 2022.

Not yet read AUTUMN: DAWN? The eBook is currently available at 99p/99c from all the usual retailers. 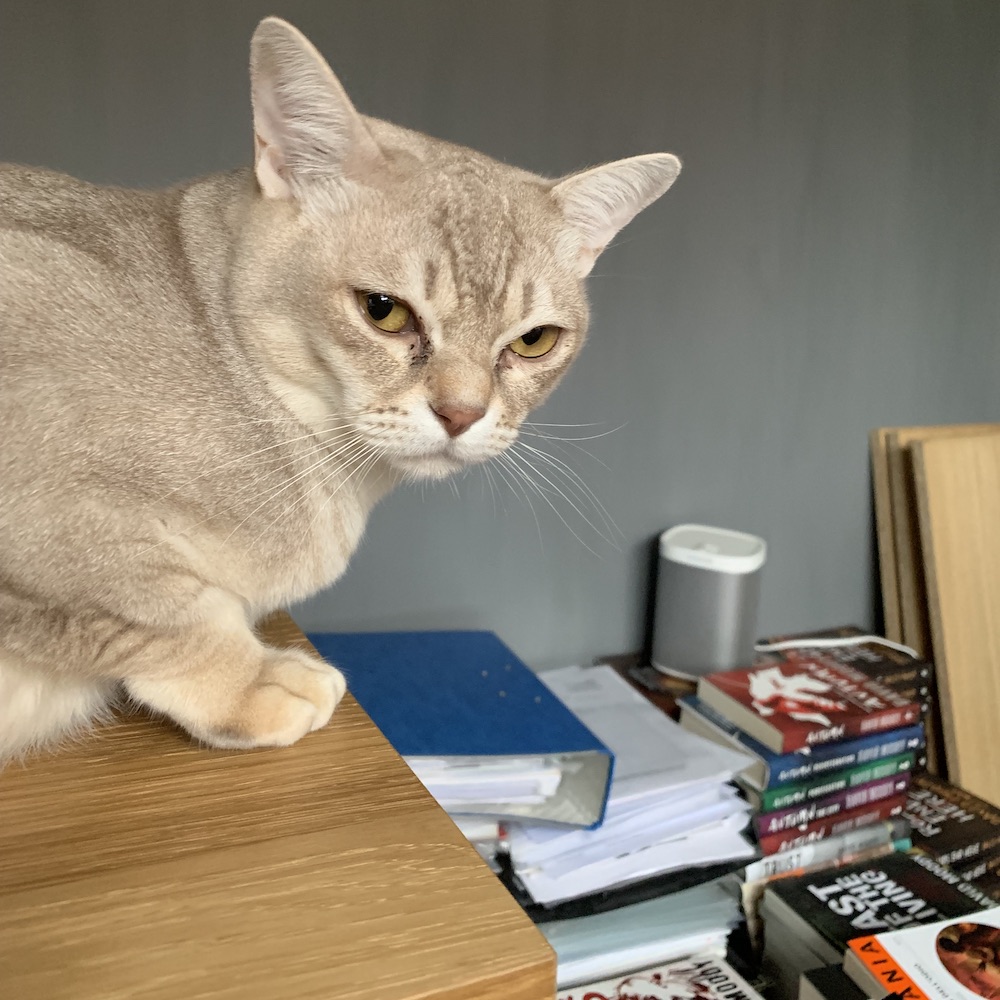 So, one final read through then the next AUTUMN book – INFERNO – will be sent to my editor, and pre-orders for the limited edition hardcover will open. What better time to reveal the cover. The marvellous CRAIG PATON has knocked it out of the park again.

Very excited for you to read this one. More details will be revealed asap. If you bought the limited edition hardcover of AUTUMN: DAWN, check your inbox in the next couple of weeks for your link to pre-order book two.

Not yet read the first part of THE LONDON TRILOGY? Here’s all the information you need to put that right…

I finished the bulk of the writing of the next book in the AUTUMN series earlier this week. I have a couple of weeks work left before I send AUTUMN: INFERNO to my editor, but I wanted to break cover and give you an update. Here’s a very brief blurb to set the scene:

There are now more than three hundred people grouped together on the banks of the Thames in the shadows of the Tower of London. On one side, the river. In all other directions, nothing but the dead.

If they can make it through winter, they’ll have a shot at long-term survival, but with so many mouths to feed, food is at a premium. They have no choice but to scavenge through the ruins of London to survive, but with every street they clear, every building they strip, they risk enraging the vast hordes of the undead that have them surrounded.

It’s a delicate balancing act: stave off starvation while doing everything possible to avoid an all out war.

But there may be another option…

As I announced in my most recent newsletter, there will again be a limited edition hardcover. First refusal will go to folks who ordered the AUTUMN: DAWN hardcover (you’ll even get the same number if you order book two!), and I plan to open pre-orders in November. I don’t know if I’ve ever explained – these limited editions aren’t a cash cow. I guess they’re my alternative to Kickstarter and other crowdfunding solutions. The proceeds from the limited editions fund the production of the book – the editing, the cover, the interior design etc. I think it’s a win-win approach. I can fund the production of each new release, and supporters get something unique. With THE LONDON TRILOGY, that means bonus content you can’t read anywhere else, and early access to an ebook version of the novel ahead of publication.

One final update, and that’s about the book’s release date. Non-work related factors have knocked me off course recently (work on the house that lasted 4 weeks instead of 1, immediately followed by a flooded office), so I’m reluctantly pushing publication back a month to make sure the release is exactly how I want it and avoid it getting lost in the chaos of the holiday season. Current ETA is now TUESDAY 25 JANUARY 2022. 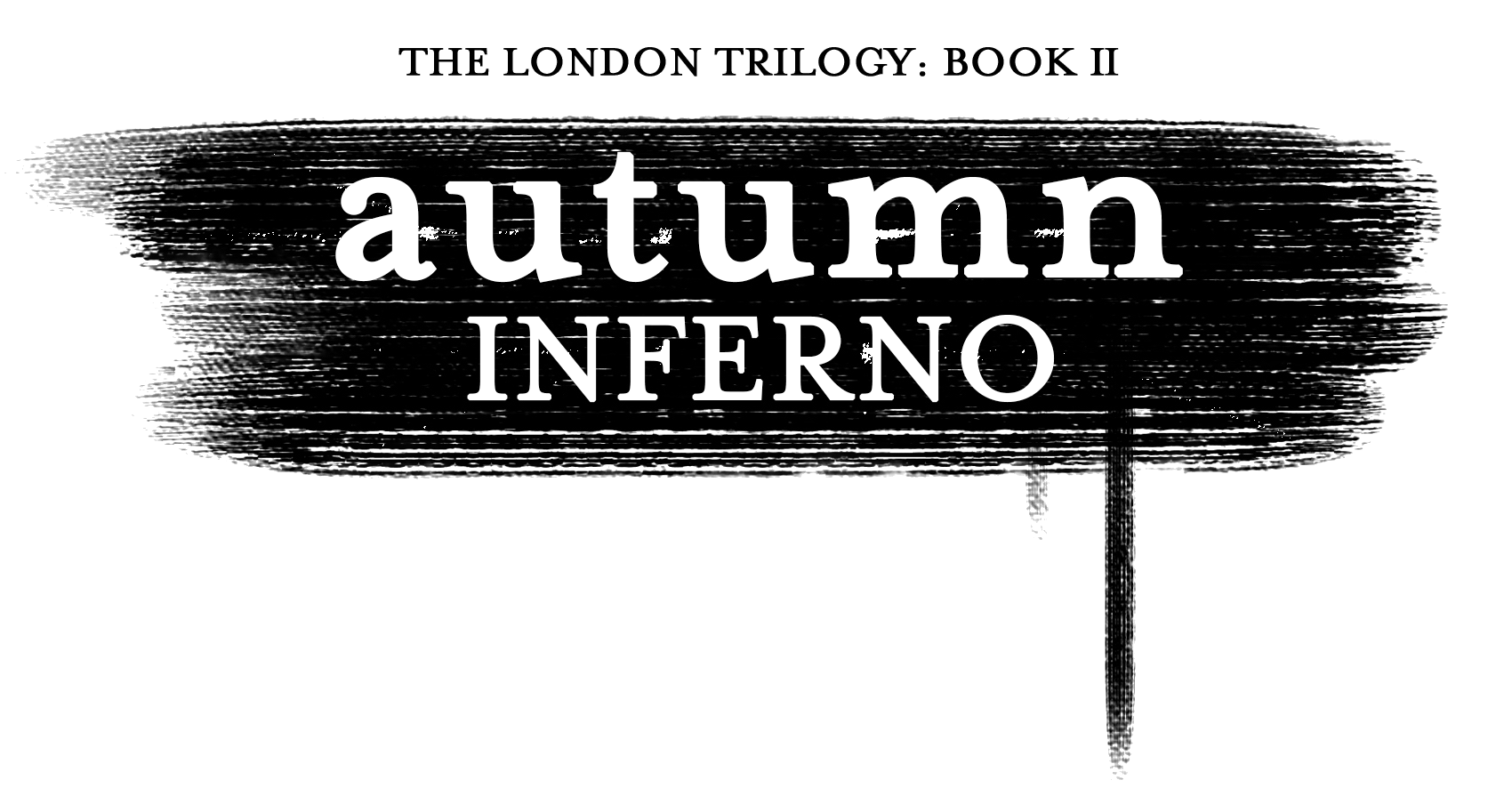 A significant book birthday to mark… my first novel, STRAIGHT TO YOU, was published 25 years ago yesterday. That’s literally half my life ago! It’s crazy to look back at how pretty much everything has changed since that first release. Back then, in the analogue world of 1996, the book’s publication came after months of queries, submissions, and rejections, followed by many more months of long-winded edits and approvals, all done by post. All that work could be carried out in a fraction of the time now, without moving from my desk.

And I’m equally unrecognisable from the inexperienced dweeb who wrote that first book. I’ve written before about how I changed, and how that eventually resulted in me completely re-writing the novel in 2014. And I can’t stress this enough – if you’re going to read STRAIGHT TO YOU, please stick to the newer version!

But the one thing that has remained constant throughout – and forgive me here for being a little corny and pretentious – is the absolute buzz of writing. A quarter of a century further down the line, and it remains an incredibly rewarding job/hobby/thrill/passion. Thank you for reading my grim nonsense all these years! 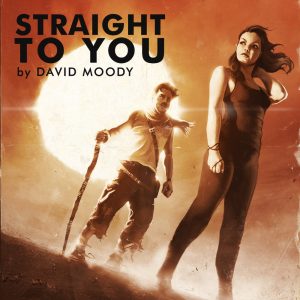 If you’ve not read STRAIGHT TO YOU, it’s available as an ebook and paperback from all the usual retailers. An audiobook version is available here. And if you’ve the stomach for reading the original, a handful of hardback copies remain available from the original print run.