NIGHT OF THE LIVING DEAD: RESURRECTION 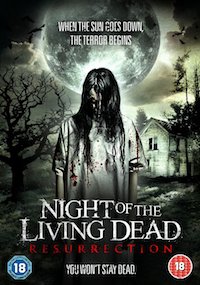 It’s a well-known fact that due to an administrative cock up by the original distributor of George Romero’s NIGHT OF THE LIVING DEAD, the film wasn’t copyrighted and it entered the public domain. For that reason there have been a plethora of DVD releases and an unprecedented number of ‘original’ movies bearing the NOTLD monicker. Most of them are truly awful, but whilst James Plumb’s NOTLD:R has more than its fair share of detractors, I enjoyed it far more than I thought it would.

The film opens with Ben (a character who, on first impressions, appears to have been lifted directly from Romero’s film) driving through the Welsh countryside whilst scanning through radio reports of attacks from the recently deceased who appear to have returned to life. He reaches an isolated farmhouse and seeks shelter there. So far so formulaic, right? Wrong again. I’ll not say too much, but how NOTLD:R’s Ben’s story pans out took me completely by surprise and set the tone for the rest of the film.

Plumb’s movie (remake/retelling/reimagining… ?) steers a familiar route through various zombie tropes: the infected family member, domestic in-fighting, the eventual desperate mission to find help/supplies etc. It does all this with impressive style for a film put together on a micro-budget. I wondered at times if the appeal for me was because the film often felt reminiscent of AUTUMN? AUTUMN was originally conceived and set in Wales, and NOTLD:R’s climactic scenes certainly evoked the same kind of atmosphere I was aiming for during the closing chapters of the book and the siege of Penn Farm. 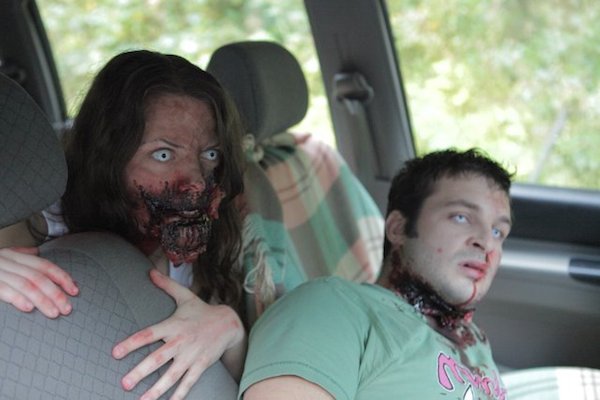 As I said, I went into NOTLD:R expecting nothing, but I came away entertained and really very surprised. I immediately got in touch with James to tell him how much I liked the film and he was kind enough to answer a few questions. He’s a realist, that much is clear, happy to admit that his film is “critically at the dizzying highs of a 2.6 rating on IMDB, but we’re smack dab centre of the Venn Diagram of Remakes and Low Budget Horror, two sub-genres that don’t score highly.” That said, the film has been a big success, he explains. “the combination of our producer Andrew Jones’ business plan, the low budget (£5k) and the NOTLD name meant that we secured funding almost straight away. Financially it’s done incredible business, generating healthy sales for both Lionsgate and 4Digital.”

I asked James how the movie came about. “Andrew Jones approached me to do a zombie film on the strength of a short film I submitted to Virgin Media Shorts, Final Girl. At first he didn’t tell me it was a remake of NOTLD, just a zombie film. I was initially hesitant as, although I’m a fan of a number of zombie films, from Romero to Fulci to O’Bannon to Kitamura, there’s been so many bad or unremarkable zombie films I didn’t want to add to that mountain, unless there was a hook, something to hold my interest. Then he revealed it was a remake of THE classic zombie film, I freaked out and started crafting a polite e-mail why I didn’t want to make a zombie film, let alone a remake…

“Thank god I didn’t send that e-mail, because here was a guy offering to produce my first feature film! Anyway, I turned that polite e-mail into a manifesto of why I’d do the film under certain conditions. Andrew was very patient, and at our first meeting agreed to each and all of the points.

“Andrew’s initial idea was to do a British spin on the original, which is such a classic tale that you can set it anywhere. So we didn’t try pretend we were shooting in the States or even London, we decided to make it Welsh through and through, to give the film it’s own accent. By setting it in the UK, we turned what could be seen as disadvantages into strengths, e.g. in the UK not everyone is packing heat. So it would be harder for our characters to dispatch the zombies, no double taps to the head. Developing that led us to the conclusion that if a family member got bitten, the characters would not necessarily jump to the conclusion that the logical course if action would be to kill their loved ones. If there was even the slightest chance that their relatives could get better, wouldn’t they take that risk? This led to locking undead relatives inside the house, creating a pressure cooker environment, which meant that inside the house is just as dangerous as out there.”

So was the NOTLD title a help or hindrance? “It was definitely a help in raising the film’s profile, a LOT of horror sites ran the news. The flip-side to that is that it was VERY daunting that my first feature, a low budget horror remake, was so publicly known. For about 48 hours I was the most hated man on the Internet, until they announced the Evil Dead remake, then that took the pressure off.

“The other hindrance came later when we were criticised by many for taking NOTLD and doing our own spin. For me there are two types of remakes: those that dust off the characters and plot points and stick younger looking actors in the iconic roles; and then those that take the themes of the original film and tell their own story. We chose the latter. I modelled our film on those great remakes: Kaufman’s Invasion of the Body Snatchers, Carpenter’s The Thing and Cronenberg’s The Fly, they take the concept of the original but then create variant texts. Creatively it was a lot of fun to work in an established universe.” 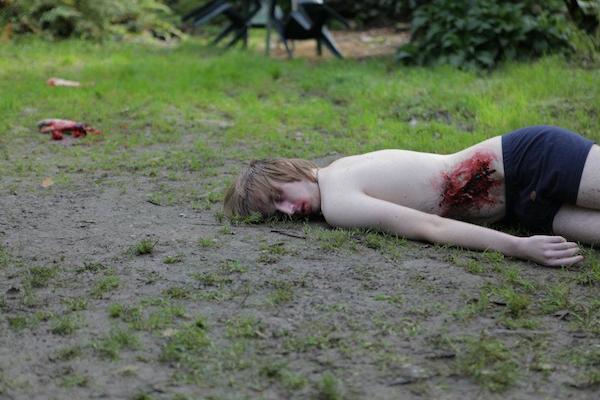 In closing, I asked James about his other work and what he has planned in the future. “While editing NOTLD:R, we were writing Silent Night, Bloody Night: The Homecoming, our seasonal slasher/giallo which we shot in April 2012 (Pro tip: don’t shoot your Xmas themed horror film in sunny April!) Much of the NOTLD:R cast and crew rejoined us and we had a blast shooting a UK set Giallo film. It was released on DVD October last year and 14 weeks on is still in the charts!

“June last year we wrapped on my third feature Kerb Crawlers, a nasty little exploitation film, that I co-wrote with the amazingly talented David Melkevik. We’re near picture lock on that film, and I’m so proud with what we’ve achieved, again on another very low budget. We’re unleashing the teaser trailer for that very soon. 2014 is looking very exciting for Mad Science Films, with several new projects lined up, which until the everything is signed and the ink had dried I’m not at liberty to divulge!”

So, while NOTLD:R isn’t perfect, and it’s been roundly savaged by many critics and viewers alike, I think it’s definitely worth your time. It establishes James Plumb and Mad Science Films as talents to keep an eye on, and it shows what you can do with that talent and even a microscopic budget. The film’s available on DVD in the US here, here in Germany, and here in the UK. It’s well worth a watch, and I’d be interested in your thoughts.