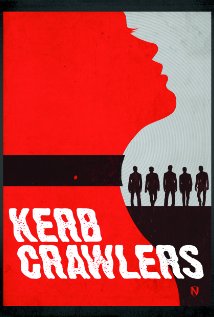 You’ll remember the name James Plumb from earlier posts. He’s a fellow SCARdiff alumni, and director of NIGHT OF THE LIVING DEAD: RESURRECTION, which I talked about here. James was kind enough to let me watch his new movie, KERB CRAWLERS, ahead of release. The long and the short of it: this is a sick, twisted and depraved little movie. And I loved every second of it. quanox gotas para que es Here’s the synopsis and a trailer (warning, definitely NSFW – don’t watch if you’re easily offended). Click the link below for my thoughts.

Hired to make a depraved snuff movie, five men abduct a young woman to be their plaything for the night. However once the cameras start rolling so do heads as they discover their victim belongs to another… ivermectin covid nature something living inside of her… something monstrous. The tables now turned, the men will receive a lesson on true pain and torture as they become the “stars” of the film.

KERB CRAWLERS gives me hope for the future of film-making. Sure, it won’t be to everyone’s tastes, and some will no doubt find the premise offensive, but that’s beside the point. What we have here is an exercise in sharp, efficient and professional standard indie movie making. James Plumb and the team at Mad Science Films have taken a pretty tasteless concept and created something sleek, smart and compulsively watchable. ivermectin seb derm

Performances across the board are strong (particularly from Matthew Batte as Blair and Lee Bane as Grant). I hesitate to describe KERB CRAWLERS as a found-footage movie, because although it most definitely is, it successfully avoids all the pitfalls of that tired old sub-genre. There’s a reason everything is being filmed: it’s an integral part of the story and it works perfectly. Loved the soundtrack, loved the graphics, loved the pacing, loved the gore.

KERB CRAWLERS comes very highly recommended. The film doesn’t have a release date yet, but I’ll let you know as soon as I hear anything. In the meantime, you’ll be able to meet James (and Wayne Simmons, and me, for that matter) at the Cardiff Independent Comic Expo 2015 on 27 June. All the details you need can be found here.

Just remember: There are no good guys.