This is the last part of my DAY OF THE TRIFFIDS retrospective. My look back at the original novel can be found here, the film version here, and the 1981 BBC TV adaptation here.

Prior to re-watching the most recent (2009) BBC adaptation of DAY OF THE TRIFFIDS, I’d only seen it once before. I had to psych myself up to watch it again, because my overriding memory of the 3 hours miniseries was crushing disappointment. This was the first time TRIFFIDS had been adapted for the screen with a decent budget, and yet I found it to be massively off the mark. A wasted opportunity.

Many of the novel’s story beats are there, and the Triffids themselves are very well realised, but I remember being hugely frustrated by a number of aspects of the production, to the point where I’d promised myself I wouldn’t watch it again. But then this series of posts came around, and I gritted my teeth and pressed play. My expectations were clearly better managed second time around, because I found more to enjoy on repeat viewing, but there’s no question this is certainly NOT the definitive version I’d hoped for.

There’s no trailer available as such, so here’s a BBC preview from when the series was shown over Christmas 2009 (hence the seasonal graphics at the end):

As I’ve said in my previous posts about TRIFFIDS, there’s a certain naivety and clunky charm to the original novel. I think that’s certainly part of the reason why the book was so successful and why it’s proven to have such a long shelf life. In my first post I talked about the (genuinely unintentional) similarities between TRIFFIDS and AUTUMN, but a similarity I didn’t initially pick up on was that between the characters of Michael in AUTUMN and Bill Masen. Both are ordinary folk trying to deal with the most extraordinary of situations, and the portrayal of Bill in this particular version of TRIFFIDS is where we start to hit problems. Here, Bill’s an action hero with an encyclopaedic knowledge of Triffids, who comes from a line of Triffid experts. It doesn’t work.

The miniseries moves at an erratic and, frankly, odd pace. The apocalyptic scenes at the beginning of the story, whilst admittedly visually impressive and often arresting, feel too overblown and Hollywood-inspired. There’s chaos and noise everywhere, and yet the reason the previous BBC TV adaptation was so chilling and unsettling was because it was so quiet. You could feel the fear of the suddenly sightless millions who were too afraid to leave their homes and venture out onto the streets. Here, though, everything’s very much in your face. Similarly the comet debris which causes the blindness, which worked so well as a literal slowburn in previous adaptations with people gradually waking up blind, is reduced here to a blast of quasi-nuclear ultra-white light. The end result may well be the same, but the effect on the pacing of the story is disappointing. And the series continues at a similarly frantic rate, bouncing along from set-piece to set-piece. It’s like driving through an area of outstanding natural beauty at two hundred miles an hour. There are some incredible things to see here, but we’re moving too fast to get anything more than a glimpse. That said, some of the CGI ruined cityscapes are terrific. 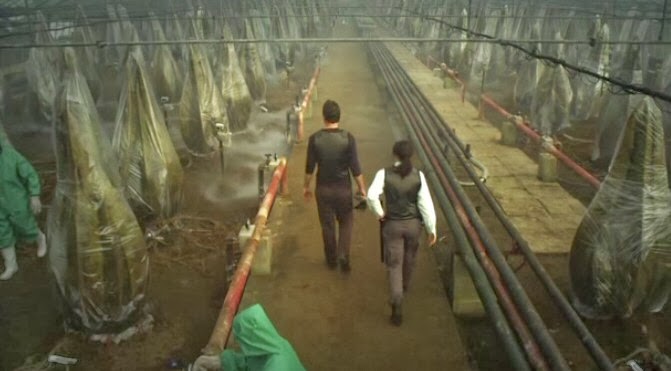 But here, for me, is where we hit the first major stumbling block. Eddie Izzard, playing Torrence, a character added for this adaptation, escapes a plane crash by surrounding himself with inflated lifejackets (honest), and then goes on to become the ‘big bad’ of the piece and… and it just doesn’t work. The character is paper-thin, his motives and behaviours desperately cliched and choreographed, and Izzard’s performance is just awful. I’ve seen him live a few times, and this is a similar kind of delivery – a smart looking, verbose villain – and it just doesn’t work.

Now might be a good moment to briefly mention the other leads. Dougray Scott plays the aforementioned Bill Masen/Rambo clone, with all the emotional depth of a doner kebab. One of my major gripes with the original novel is the character of Josella Playton, who fits all the uncomfortable stereotypes of women written by men in the fifties. Somehow the 2009 script renders the normally excellent Joely Richardson even more pathetic than the versions of Jo we’ve seen previously. I expected this might be an opportunity to redress the balance somewhat and give Jo more of a positive role, but the opposite is true. She exists to look plaintively into the camera and pine after superman Bill. Honestly, it’s painful to watch at times. Rounding out the main cast is Jason Priestly as (for some reason) an American Coker, who sits on the fringes of the story until he’s needed, and whose final appearance in the series involves throwing papers out of a helicopter window whilst flying, AND SOMEHOW MANAGING TO GET THEM TO LAND IN BILL’S DAD’S GARDEN. Bill’s Dad, by the way (another character added for this version) is played with real style by Brian Cox. 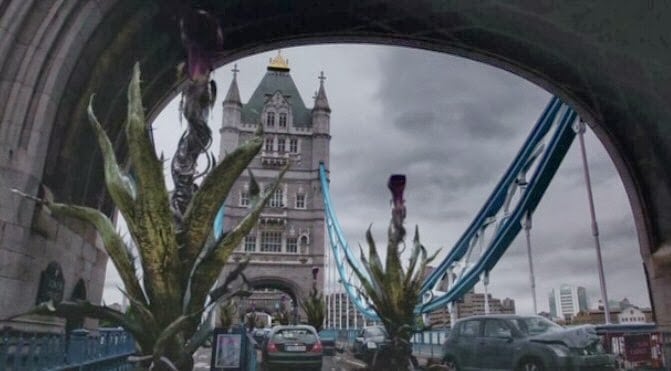 A word about the Triffids. They’re pretty good, actually. Clearly CGI, but they’re quite menacing. They’re faster than you’d expect, and noisier, and more reactive, and yet if you can get over these facts, then they’re very effective. Their use of their roots to capture and overpower their victims, whilst at odds with the behaviours in Wyndham’s novel, makes for several entertaining scenes (not least when Eddie Izzard gets his comeuppance, which was one of the main reasons for me sticking it through to the end…).

There’s a real effort to update the source material here, but I think it goes too far. It unnecessarily overcomplicates the plot in a number of ways – mystical goings on in the jungle, genetic manipulation of the Triffids, overinvolved economic explanations and subterfuge – and to my mind each of these deviations robs the story of its simplistic power. It also gives us a number of needless plot holes, most notably that for an economy suddenly so dependent on the Triffids, it’s population is remarkably blinkered about their danger. Much of the middle act of the novel is jettisoned or stripped down, to the point where certain parts feel needlessly bolted on for effect (Vanessa Redgrave as leader of a religious group which sacrifices its members to keep the Triffids at bay being the prime example). Again, these scenes just distract from rather than add to the story. 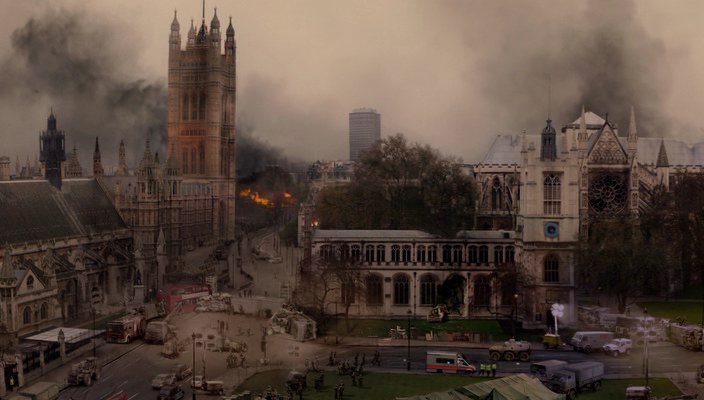 Bottom line, this version of DAY OF THE TRIFFIDS is worth a watch, but manage your expectations. As I said at the beginning, it’s a missed opportunity which pales in comparison to the 1981 BBC version of the book. Judge for yourself – it’s currently streaming on Amazon Prime in the UK.

So what are my conclusions now that I’ve re-read the book and re-watched all three adaptations in relatively quick succession? First, it’s hard to make a Triffid scary, but the less you have them do, the more menacing they become. Second, their numbers are the real threat, and that’s something no adaptation has yet been able to successfully exploit. Third, the emptiness and quiet of the original novel is one of its key strengths, and filling the world with explosions and noise simply lessens the impact of the story. Fourth, Bill Masen is an everyman with a passable knowledge of Triffids, the more heroic and gung-ho you make him, the less the audience cares. Five – John Wyndham knew what he was doing. He wrote a startling book about of two devastating events (the coming of the Triffids and the mass blindness in the human population). None of these adaptations has yet managed to fully exploit the synchronicity between the two. They seem to be all about blind people, or all about Triffids, or all about nothing at all.

And what would make a good adaptation? I have my ideas, but I’m not going to share them here. It’s my hope that, one day, a film studio will look to tackle TRIFFIDS again, and that maybe I’ll be able to have a crack at the script. I can dream, can’t I?!

Thanks for sticking with me as I’ve indulged my Triffid-related passions over the last few weeks.