The JoBlo movie network website always has stacks of great content. One of the sections I enjoy most is the snappily titled “The Best Movie You Never Saw”, and this week it featured one of my favourite films. A quick glance at my RECOMMENDATIONS page revealed that I’d never written about it for this site, so I thought I should put that right post haste! This weekend’s film recommendation is Joel Schumacher’s startling 1993 movie, FALLING DOWN.

Freeways are clogged. Terror stalks our cities. At shops and restaurants, the customer is seldom right. Pressures of big-city life can anger anyone. But Bill Foster is more than angry. He’s about to get even.

Foster abandons his gridlocked car on the hottest day of the year and walks straight into an urban nightmare both absurdly funny and shatteringly violent. Michael Douglas is Foster, an ordinary guy at war with the frustrations of daily life. Robert Duvall is the savvy cop obsessed with stopping Foster’s citywide rampage.

I don’t think this was a direction anyone expected Michael Douglas to take: a Hollywood heart-throb sporting a short-sleeved shirt and tie, dodgy glasses and an even dodgier haircut. After a string of huge films including BASIC INSTINCT and FATAL ATTRACTION, the role of Bill Foster was definitely taken against type. I’m typically not a fan of films starring big-name actors (because there comes a point when you stop believing in the characters they play and start thinking oh, there’s Brad Pitt/Tom Cruise/Michael Douglas/insert name here… for me it often detracts from the movie). In the case of FALLING DOWN, though, it actually helps. The familiarity of Michael Douglas adds another layer to his character’s alienation, emphasising how completely at odds he is with his surroundings.

It’s a film of two halves, in more ways than one. In the first half we’re with Foster almost* all the way as he comes up against obstruction after frustration after obstruction, when all he wants to do is get home to celebrate his little girl’s birthday. We cheer when he stands up for himself at the burger joint where he can’t get breakfast two minutes after time, and we punch the air when he gets one over on the dumb gang members squabbling pointlessly over imagined territorial lines. (*I say almost all the way, because whilst we’ve maybe all had moments where we’ve wanted to shoot up a phone box with a machine gun or fight back against some perceived unfairness when we’re out shopping, FALLING DOWN takes this to a new level. And once the spontaneous laughter and shock has died down, the film often cuts away giving the viewer very little time to consider Foster’s morality or, indeed, to think about how deserving his ‘victims’ really are).

And then the film changes. Completely.

I’m not going to say too much about the shift change, because to do so would rob the movie of some of its power if you’ve not seen it before. Suffice to say, it has some similarities to the tonal shift which occurs two-thirds of the way into HATER, and I won’t deny that certain aspects of FALLING DOWN influenced the way I wrote the novel.

But there are other equally interesting aspects of the film to focus on. Robert Duvall is in fine form as the cop who, on his last day before retirement, is trying to stop Foster and who, in doing so, is forced to evaluate his own life, loves and achievements (or lack thereof). There’s also the impact of events on Foster’s family as they wait for him to get home. This is another story where every character believes without question that they’re in the right and everyone else is wrong. The dynamics are fascinating.

For such a sensational story, and considering the track record of director Joel Schumacher (Flatliners, The Lost Boys, Batman Forever, Batman & Robin), events are presented in a relatively straightforward manner and the film is shot with a grimy-looking colour palette. To me, FALLING DOWN has always felt as oppressive as it looks: watching it feels like being overdressed and force to walk through an unfamiliar and horrendously crowded city on the hottest day of the year which, essentially, is what Michael Douglas’s character is forced to do. 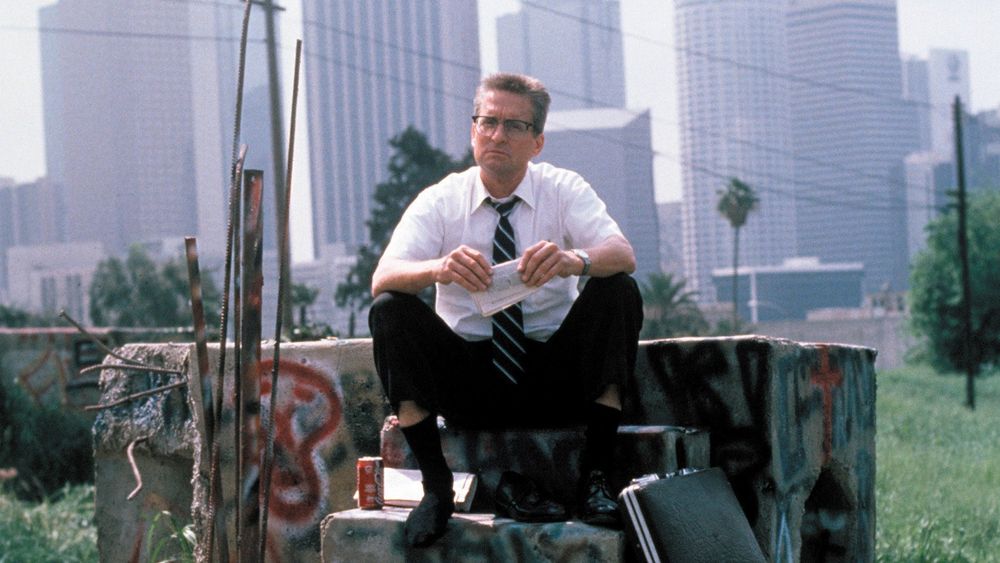 It’s hard to believe that FALLING DOWN is more than twenty-five years old now. In some ways it’s dated, in other ways it feels disappointingly relevant. However you view it, and wherever your sympathies lie, there’s no arguing that it’s a bold and affecting film which asks questions we’re still no closer to answering a quarter of a century later. It’s worth watching for the dual powerhouse performances of Douglas and Duvall, but there’s so much more to see here. If you’ve not seen it, can I recommend you put that right immediately. And if you’re new to FALLING DOWN, I’d be very interested to hear your thoughts.