And now for something completely different…

I made a decision early in 2014 to push myself out of my comfort zone more often this year, and the result of one such excursion is released today. THE BLACK FANG BETRAYAL is a collaborative novel produced by J Thorn and written by Thorn, TW Brown, Michaelbrent Collings, Mainak Dhar, J.C. Eggleton, Glynn James, Stephen Knight, T.W. Piperbrook, J.R. Rain, and myself. 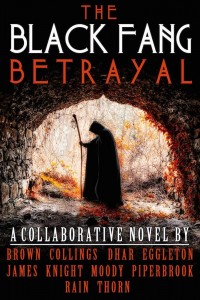 Levi Phillips is a warlock living in the woods of rural Ohio. With his apprentice, Matthew, Levi operates one of the most ferocious covens in the world, known as The Black Fang. Managing the coven like an international corporation, Levi controls its enormous wealth while running a moonshine operation as a front. But when a plot to assassinate Levi is exposed, the warlock decides it’s time to destroy The Black Fang and the destruction could create a new beginning.

The Black Fang Betrayal features today’s best horror, dark fantasy and thriller writers collaborating on a unique and fascinating novel. Armed with nothing but a prompt and a character name, each author became a warlock of The Black Fang and wrote a first-person account as a member of the coven. Using themes and sequences woven throughout the complete narrative, a cohesive page-turner emerges.

It was great to be a part of such a unique project, and folks who’ve read the book so far seem to have really enjoyed it. It’s available at the astonishingly low introductory price of $0.99 for a limited time, so please do check it out. Visit www.theblackfangbetrayal.com for more information and an opportunity to enter an exclusive competition. Can you match the authors to their stories?