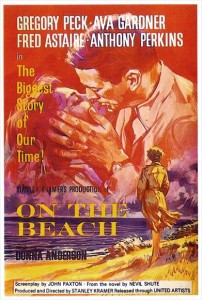 Based on the 1957 novel by Nevil Shute, the story tells of a world which has been all but destroyed by a nuclear war, involving all the major players but largely confined to the northern hemisphere. Only Australia, New Zealand, South Africa and parts of South America remain habitable, but only temporarily as a vast cloud of radiation is drifting steadily southwards. It’s clear from the outset that there’s next to no hope. All the people in the southern hemisphere can do is wait…

That’s a startling simple premise for a story, and one which works wonderfully. I’ve said many times that I consider myself a ‘people watcher’ (which isn’t as bad as it sounds… I’m interested in the way people interact and react with each other, how and why they get on or not, and how they work together to fulfil their individual and group responsibilities and needs). Putting people in an apocalyptic situation is interesting in that regard, because many of the layers of bullshit and manners imposed on us by society get stripped away in such circumstances, leaving people with little option but to act instinctively and honestly (for once). The situation faced by the characters in ON THE BEACH is even more difficult. Whilst they all know their deaths are imminent, until the radiation cloud reaches them they’re able to live relatively normal lives. It’s the inevitability that these people will soon lose that normality which, for me, makes the story so powerful.

The 1959 movie remains effective, and there’s also a decent US miniseries remake from 2000 (directed by Russell Mulcahy of HIGHLANDER fame) that’s worth digging out as, of course, is Shute’s original novel. However you chose to experience it, I very much recommend you do check out ON THE BEACH if you haven’t already. Powerful, thought-provoking and ultimately heart-breaking.