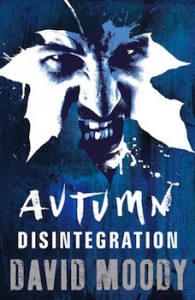 I started a new job in August 2006. On the morning commute, driving along the motorway away from the centre of town, I passed by some very different looking buildings which sparked my interest. First was a series of particularly ugly blocks of flats: huge, three-winged monstrosities which dominated their surroundings and yet which managed also to look completely out of place against a backdrop of fields and rolling hills, as if the rest of the world was fighting to eject them. Further along the road was a large hotel which seemed more isolated than it actually was, but which looked like the ideal place in which to hole-up and sit out the zombie apocalypse. By the way, this year I moved house and I now live much nearer to both locations. Here’s a photograph of the flats in question, taken a couple of weeks back whilst walking the dog (who I’ll talk more about in a minute). 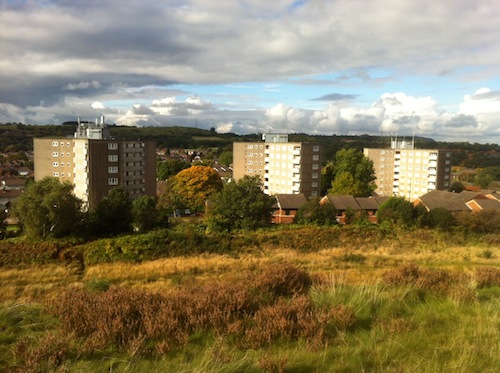 The pieces of the story seemed to just fall into place. Surrounded by new work colleagues in a new environment, inspiration for many of the characters came quickly (though I’m not going to say who inspired me or how!). I had an outline, some great scenes in mind, I’d made an announcement about the new book, and then… well then the real world got in the way. I was working full time whilst keeping Infected Books running in the evenings. Then life became beautifully chaotic when I sold the film rights to both AUTUMN and HATER in quick succession. In the midst of all of this, my father-in-law became seriously ill and we were visiting regularly – 400 mile round trips pretty much every weekend until he passed away. It was an incredibly strange time: euphoric highs and devastating lows with barely a pause for breath inbetween. And when people started getting shirty because I was late delivering DISINTEGRATION, I thought fuck ‘em.

It wasn’t until early 2008 when, thanks to Thomas Dunne Books acquiring rights to the HATER novels, I was finally able to quit work again and devote some time to writing. My first project was DISINTEGRATION, and the book was finished within a few months. And just as I was about to release it, Thomas Dunne in the US and Gollancz in the UK bought the rights to the AUTUMN series and publication was pulled. As you probably already know if you’re reading this, DISINTEGRATION didn’t see the light of day until November 2011.

It’s a book I’m really proud of. Running parallel with PURIFICATION, it extended the series logically and set up AUTUMN: AFTERMATH. It gave me a chance to write about a wider range of people than ever in a variety of locations from full-on urban decay to Survivors-like post-apocalyptic countryside opulence (of a sort). The bloodiest and most violent of the books, I hope it succeeded in showing why I reckon it won’t necessarily be the strongest or the fittest who survive the zombie apocalypse, it’ll probably be the people who think.

And finally, about that dog. I’ve written here before about my youngest daughter, and how she struggled with a condition called Selective Mutism. There’s a post about it here. One of the ways we tried to help her was to get a dog. SM is an anxiety problem which renders sufferers unable to speak, and the logic was that being out in public with a dog would give our little girl a ‘shield’ so she could deal more confidently with people she didn’t know. I won’t go into the ins and outs right now. Long story short, it worked, and now we can’t shut Zoe up! But I didn’t want a dog. When I left work and started writing full-time, I inherited the damn thing and feeding, walking and cleaning up after her became my responsibility. And looking back now, I can see my frustrations coming through in DISINTEGRATION.

Harte looked around anxiously. He could hear something. It was a clack-clack-clacking sound, coming towards them along a corridor on their right. It didn’t sound human, but it was moving much too quickly to be one of the dead. He instinctively looked around for a weapon, but immediately relaxed when the source of the sound appeared: a scruffy black-and-white dog with short, wiry fur wearing a tatty red collar poked its head through the doorway and ran out, its claws tapping against the terracotta floor tiles as it moved. It stopped and cocked its head to one side, then looked back over its shoulder at the sound of more footsteps, heavier this time, and much slower.

A tall, stocky red-faced man who was hopelessly out of breath entered the room and grabbed hold of the dog’s collar. ‘Wow!’ he said, looking with disbelief at the size of the crowd gathered in reception.

‘This is Howard Reece,’ Martin said, and Howard grinned.

‘Good to see you all,’ he wheezed, relaxing and letting go of the dog.

It bounded over to Lorna and began to sniff at her dirty, bloodstained trousers and boots. She leant down and stroked its head. ‘What a beautiful dog,’ she said, ruffling its short fur. ‘What’s its name?’

‘She doesn’t care,’ Howard said with a wry smile. ‘She  just attached herself to me when all this started, and now I can’t get rid of her.’

For the record, we’ve still got her. And as I type this, she’s doing all she can to stop me working. Bloody animal! 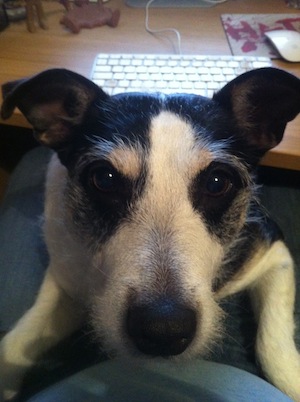