I’ve talked a lot about ISOLATION recently, but I’m conscious I haven’t told you very much about the four additional zombie stories which come bundled with the new novella. I’m going to put that right today.

WHO WE USED TO BE
Originally appeared in John Joseph Adams’ excellent THE LIVING DEAD 2 anthology, and I’ve grown to think of it as the antithesis to THE COST OF LIVING. One minute, everyone in the world dies unexpectedly. A minute later, they all reanimate. The story focuses on a small family unit as they try to prolong their increasingly precarious existence for as long as possible…

MURIEL
Was written for an SFX magazine zombie special. I make no apologies for it being a more mainstream zombie tale than anything else I’ve written, as I was writing for a specific audience. It’s a quick, gory and fun tale of a lone survivor living on his nerves in his parents’ house.

TIGHTROPES
A brand new story set in a world which has just about managed to pull itself back from the brink of the zombie apocalypse. So when we’re used to living alongside the threat of the undead, how long will it be before we slip back into our old ways again…?

WISH I WAS HERE
I’ll say little about this final story, other than it was inspired by a thought that’s regularly struck me… No matter what the reason we’re given for the dead beginning to rise, at the outset there’s a stark difference between us and them. But the longer the situation goes on, the less noticeable those differences become. When the dead walk the Earth, can there be any winners?

I hope you enjoy ISOLATION – early reviews have been great (the ever-reliable BookBloke said: “I was once again blown away by the recognisable settings and relatable yet engrossing characters. A gripping read. Treated to four more short stories within this book, all with different takes on zombie fiction, it’s a must have for zombie lovers, people who love gore and violence and people who love stories with exceptional characterisation. It’s one that’s not to be missed”). And finally, for those who’ve been asking, in the coming weeks I’ll be formally announcing LAST OF THE LIVING – a new paperback release which will include ISOLATION, THE COST OF LIVING, and all the other stories I’ve talked about today. 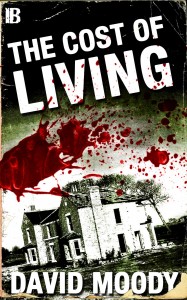 If you’ve already got the book, you’ll already know this but, if not, I thought it would make an interesting post. Did you know that I wrote three entirely different versions of THE COST OF LIVING, and that all three are included in the ebook?

It just goes to show the effect a format can have on the story you’re trying to tell.

The first incarnation of THE COST OF LIVING came back in 2010 when I was invited to put together a story for John Joseph Adams’ excellent LIVING DEAD 2 anthology. A different tale altogether ended up in the book (WHO WE USED TO BE), but I also finished PRIORITIES – the 5,000 word short story of mom, dad and disgruntled older son, trapped in their home at Dad’s insistence with no way out, surrounded by hordes of zombies.

I wasn’t entirely satisfied with the story. A while later I was invited to write a piece of flash fiction by my friends at THIS IS HORROR, and I decided to strip back THE COST OF LIVING to bare bones. Just 750 words.

But I still wasn’t happy. It seemed to me that whenever I tried to write the story, I was being curtailed by its length. I never saw THE COST OF LIVING as being long enough to make a full novel, but I knew it needed more than the short formats I’d already tried. So, at the beginning of this year, I started writing again with the sole aim of telling the story I wanted, irrespective of word count and length.

And I’m absolutely blown away by the reception you’ve given the 38,000 word novella version of THE COST OF LIVING, so much so that I’m planning to return to the format sooner rather than later. One novella a month, perhaps?

Wayne Simmons says: “THE COST OF LIVING is character-driven zombie horror at its very best. No fan of the genre should be without it.” And Chris Hall at DLSReviews.com says the book is: “A truly superb post-apocalyptic story.” 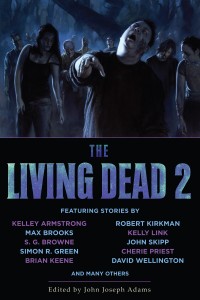 Just a couple of weeks to go now before The Living Dead 2 hits the shelves. This (huge!) book is already getting some exceptional reviews around the net, and why wouldn’t it? 40+ new zombie stories from the likes of Max Brookes, Jonathan Maberry, David Wellington…

Editor John Joseph Adams has just launched the book’s official website which can be found by clicking here. Head on over to read about each of the individual stories and, starting today, interviews with each of the contributors.

As a bonus to whet your appetite even further, you can also read several full stories for free, direct from the website. And I’m really pleased to tell you that my story – Who We Used to Be – is one of them. Click here to read it and please spread the word on Twitter and Facebook etc.