Straight to You will be released a month from today. By now I’m sure you know it’s a complete re-write of my debut novel, so the story has been around a fair while. I wanted to tell you about the time the book almost became a movie…

I was in two minds as to whether or not I should post this, but why not. I’ve removed all the names and other identifying details to protect the innocent (more to protect me, actually), but you’ll still be able to get the gist of this cautionary tale. This is an example of how the corporate entertainment machine can ‘acquire’ ideas. Though it’s probably all just coincidence (he adds quickly for legal reasons).

Given how much information I’ve deliberately missed out, I wasn’t sure how best to tell this story. I decided to use the power of Bitstrips.

It all starts back in 2007. When the film rights to Hater were sold, I suddenly had a lot of people very interested in my books. 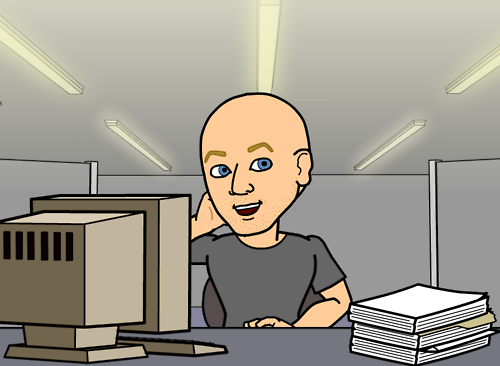 I received an email from the production company behind some very famous films. They were asking about Hater initially, but then they started looking at my lesser-known books. As you’d expect, I was really, really excited.

This site has been uncomfortably quiet again. My excuse this time? I spent much of last week in the beautiful town of Avilés, Spain at the second Celsius 232 literary festival. A wonderfully relaxed event organised by a group of lovely people, it was an honour to attend alongside a number of other English-speaking authors including Joe Abercrombie, Lauren Beukes, Christopher Priest, Paul McAuley, John Courtenay Grimwood and Nina Allen. It’s a huge thrill for me whenever I’m asked to sign books for people, but the experience of travelling almost a thousand miles from home and being asked to sign translated editions of those books… well, that’s something else. It’s very humbling to be able to connect with people like that when you don’t even speak the same language! 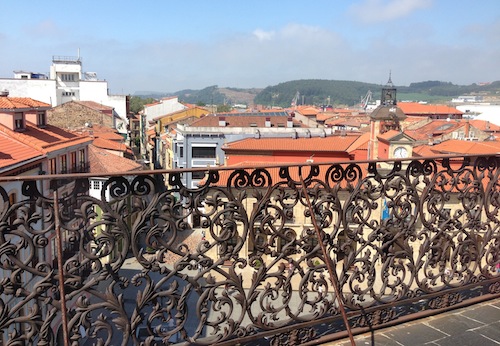 The view from the hotel tower

Particular thanks to the organising team – Jorge, Cristina, Ian and Ana – for inviting me and for being so hospitable. Thanks also to Jesús Palacios for hosting a really enjoyable interview session and to Diego Garcia Cruz, whose translation skills genuinely have to be seen to be believed. Diego translated the questions into English while they were being asked, listened intently to my rambling answers and made shorthand notes, then translated back to the audience word for word, complete with matching hand gestures and intonation. Astonishing. 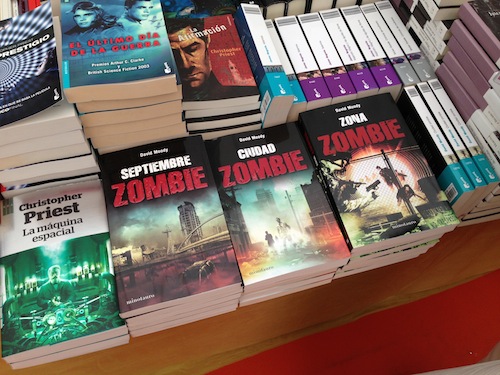 Some dodgy zombie books for sale…

Other highlights… well apart from being a typical tourist and wandering around Avilés and the surrounding area with my wife (four days in the sun without the kids… you have to seize these chances when they present themselves!), I’d have to say that watching Willow (in Spanish, of course – it seemed to make more sense when I couldn’t understand the dialogue) outdoors in the Plaza España along with several hundred other folks was unexpectedly entertaining. And taking part in a panel about having your book adapted for screen alongside Robert J Sawyer (who wrote Fast Forward) and Christopher Priest (who, of course, wrote The Prestige), was both a great experience and an education.

A wonderful and unique festival experience. Thank you, Celsius 232! Read more about this exceptional event by visiting the festival’s official site. 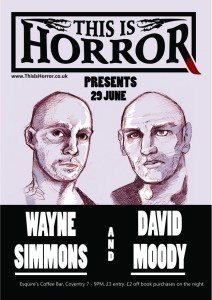 A quick update to let you know about some upcoming events.

THIS IS HORROR PRESENTS SIMMONS vs MOODY

First off, a reminder that this Saturday, June 29, Wayne Simmons and I will be at Esquires Coffee Bar in Coventry between 7pm and 9pm, reading, signing, answering questions and talking about horror and our writing in general. Tickets are £3, with £2 redeemable against book purchases on the night. For tickets, email Michael@ThisisHorror.co.uk or visit Waterstones Coventry. Copies of Autumn: The Human Condition will be available to pick up on the night. More information about the event can be found here at www.thisishorror.co.uk.

Between July 31 and August 3, I’ll be a guest at Celsius in Avilés, Spain. Details can be found here. Very much looking forward to my first event in Spain!

Scardiff is a new horror expo taking place in Cardiff on October 27. I’ll be there alongside a number of really exciting guests including Dominic Brunt and Bobby Rhodes (yes, the Bobby Rhodes of Demons fame!). Scardiff is the brainchild of Wayne Simmons, Fantasy Events, and Shock Horror Magazine. Reduced price advance tickets are now available, and all the information you need can be found right here.

HORROR IN THE EAST

And then it’s back to Lowestoft on November 8 – 9 for the second Horror in the East convention. Have a look at last year’s report to see what an excellent event it was, then make a note in your diaries to come and join us for this year’s convention. Very relaxed, hugely enjoyable, and all taking place in the town where Them or Us was set! More details can be found here.