Just prior to the second national lockdown starting here, and in the absence of many new releases, our local cinema showed a series of classic horror movies. I can’t remember if I’ve mentioned how close we live to a cinema before. It’s literally a five-minute walk from my front door, and in the eight or so years we’ve lived in this spot, it’s been a source of gainful part-time employment for three of our daughters. I love the place and have been keen to support it whenever its doors have been open during the nightmare which has been 2020. I managed to catch a couple of films, the first of which was NEIL MARSHALL’S werewolf classic, DOG SOLDIERS.

Here’s a quick synopsis from IMDB: A British Squad is sent on a training mission in the Highlands of Scotland against Special Operations squad. Ignoring the childish “campfire” stories heard about the area, they continue with their mission and come across the bloody remains of the Special Ops Squad, and a fierce howling is pitching the night sky… With two mortally wounded men, they make an escape, running into a zoologist by the name of Megan – who knows exactly what hunts them. What began as what they thought was a training mission turns into a battle for their lives against the most unlikely enemies they would have expected – werewolves.

I’m a sucker for a good werewolf story (have I ever mentioned that HATER actually started life as a werewolf tale?), but that’s the problem – good werewolf stories are frustratingly hard to find. AN AMERICAN WEREWOLF IN LONDON remains my favourite by far, but Marshall’s 2002 debut definitely makes the grade. There’s a 4k remaster just released here in the UK, and it was the restored version which was screened. It was the first time I’d seen DOG SOLDIERS for a decade or more, and I’m pleased to report that it’s still as bloody, funny, and bloody funny as it was when it first hit the screens.

There’s an explosive energy about DOG SOLDIERS that reminds me of the first two EVIL DEAD movies and PETER JACKSON’S early films. Whilst DOG SOLDIERS is far more grounded and earthy that any of those films, it’s often as frenetic and exciting. Belying the film’s miniscule budget, Marshall delivers a claw and fang-filled tour-de-force which puts to shame other films with ten times the money to spend.

I’m surprised the werewolf genre hasn’t been exploited more over the years. Most books and films follow the same predictable beats with the focus often being on some poor tortured soul who is attacked and becomes a werewolf and goes on a ferocious killing spree until someone puts them out of their misery. Not DOG SOLDIERS. Here we have a different approach, with a squad of fresh, but competent, soldiers stumbling (not by chance, we later learn) on a remarkably civilised family of werewolves for whom howling at the moon and killing locals appears to be just another facet of everyday life. 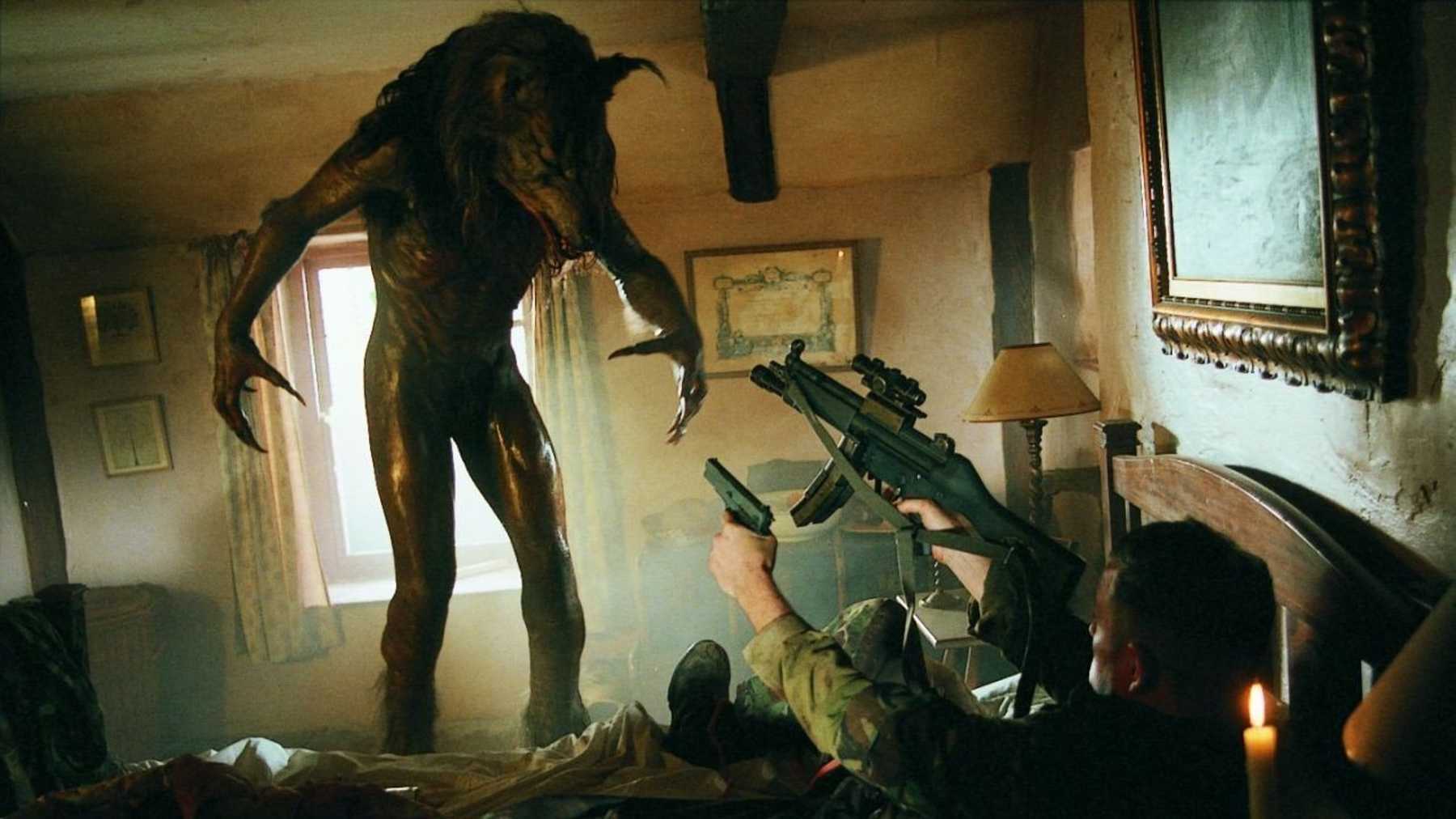 It’s this originality that carries the film, and the enjoyment is ramped up several notches by a healthy dose of humour and disrespect. The cast is strong, particularly the brilliant SEAN PERTWEE and GAME OF THRONES’S Davos Seaworth, LIAM CUNNINGHAM. Snappy editing, creative camerawork, and assured direction keep things moving quickly towards an effective ending.

The werewolves themselves are often the weak point of werewolf movies, and here it’s clear that the filmmaker’s resources were limited. Again, though, DOG SOLDIERS doesn’t suffer because of its budget: the creatures are sufficiently unique in appearance (did I read somewhere that they were played by ballet dancers on stilts?) and they’re usually glimpsed quickly or shown in silhouette. To have shown more, I think, would have reduced their effectiveness.

DOG SOLDIERS is a truly great werewolf film, and if you haven’t yet seen it, can I recommend you put that right at your earliest convenience. With all the chatter surrounding the remastered re-release of the film, I’ve heard talk of a possible sequel. Count me in. I look forward to getting back to the cinema round the corner in a hopefully post-pandemic world for more of Marshall’s lycanthropy. In the meantime, it’s really made me want to write that werewolf novel…

The remastered version of DOG SOLDIERS is streaming now on Apple and Amazon.