The Night Eats the World

Well this one came from out of nowhere and blew me away. Its release last year passed me by, and it’s only thanks to a casual mention of the title by a friend and coming across the movie whilst browsing Netflix that I watched it. And I’m so glad I did. I thought it was a fascinating study of loneliness – something that’s considered less and less in many twenty-first century post-apocalyptic films. The concept of being the last person left alive on the planet is something that used to be a staple of end of the world stories (with I AM LEGEND being an obvious example), and yet in today’s increasingly (superficially) interconnected society, it feels like an inevitable by-product of the apocalypse which isn’t discussed as often as I’d expect.

In THE NIGHT EATS THE WORLD our main character Sam is already alone. We meet him as he makes a return visit to his ex-partner’s flat in Paris – filled with people, noise and good times – hoping to collect the last of his belongings. He wants to get in and out fast but is persuaded to stay, and as a result of the booze he consumes to help him get through the obvious awkwardness of the situation, he passes out. When he wakes up next morning, the walls of the flat are covered in blood. He’s slept through the zombie apocalypse.

So far, so cliched. As I said at the outset, this film took me completely by surprise. It won’t be to everyone’s tastes that’s for sure; a quick glance at some of its polarized reviews shows that all many reviewers see is a miserable man trapped in a flat! For me, though, it’s immeasurably more than that. First and foremost, I think that’s because of its simplicity and directness. It’s a straightforward, uncomplicated story, mirroring the straightforward and uncomplicated life of Sam. We’re on his side from the get-go, and it’s clear from the opening scenes that his life has been moving at a very different speed to the rest of the world. You get the feeling he’s been left behind. Overtaken. 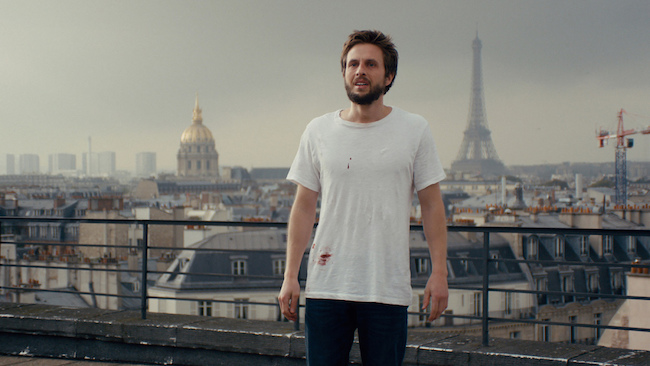 Anders Danielsen Lie’s subdued performance as Sam does much to carry the story along. He’s my kind of hero (and what I mean by that is he’s not a hero at all). He’s a victim of circumstance, and he does his best with the few opportunities that are presented to him. There’s no time wasted thinking about what’s caused the apocalypse, and little consideration given to finding out the scale of what’s happened or looking for survivors. All Sam wants is to stay alive. He befriends a zombie trapped in a lift-shaft and risks his life to save a kitten. Seriously – if you’re looking for large-scale action sequences here, you’re going to be disappointed.

What is to be found, though, is a convincing portrayal of a guy who’s been dealt a few bad hands, being dealt one more. He’s been knocked down so many times he can’t remember how to get back up. He makes the most of the little he has, gradually checking the other apartments for supplies in the prison-like block where he’s found himself incarcerated, and shutting the door on undead neighbours in preference to having to deal with them. 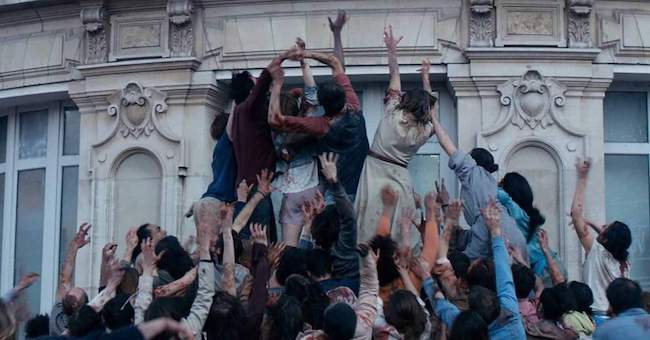 In these brief write-ups of zombie movies, I like to mention the effectiveness of the living dead themselves. I’m pleased to report that the creatures here are phenomenal. Physically, they’re not much to look at, but in terms of their physicality, they’re off the scale. They’re quick, random, vicious, spasming creatures, and their movements and intent couldn’t be more of a contrast to our self-absorbed, lethargic hero. They move as a pack, as a herd; yet another stark contrast with singular Sam.

THE NIGHT EATS THE WORLD is directed by Dominique Rocher from a novel by Pit Agarmen. I’m deliberately underselling the film, because there are some twists and plot shifts that I didn’t see coming which elevate it into something special. If you have a Netflix account and a spare ninety-or-so minutes, I thoroughly recommend it. No Netflix? I believe it’s on Amazon Prime in some locations and is also available on DVD.