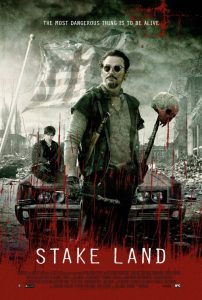 I guess we all have films we fully intend to watch on release but then, for one reason or another, we end up missing. I don’t know about you, but I have a ‘to watch’ pile that’s as big as my ‘to read’ pile. Today’s movie recommendation, Jim Mickle’s 2010 STAKE LAND

, is one such film which I’d been planning to watch for years but only just got around to. STAKE LAND popped back up on my radar recently when it was announced that a sequel – THE STAKELANDER – has been filmed in secret. In these days of set reports and teaser images and trailers for trailers, it’s so refreshing to hear about a movie project for the first time once it’s in the can.

by now. In any event, here’s a synopsis and trailer. Click the link below for my brief thoughts.

America is a lost nation. When an epidemic of vampirism strikes and his family is slaughtered, young Martin (Connor Paolo) is taken under the wing of a grizzled, wayward hunter (Nick Damici) whose new prey are the undead. Simply known as Mister, the vampire stalker takes Martin on a journey through the locked-down towns of America’s heartland, searching for a better place to call home while taking down any bloodsuckers that cross their path.

. Over the years there have been a slew of movies with a similar premise: a vampire epidemic has left humans as an endangered species. I can’t recall a movie that’s used that scenario as effectively as this one. The characters are, to be fair, relatively generic for a post-apocalyptic movie, though the performances are solid across the board (the cast includes genre stalwarts Kelly McGillis and Danielle Harris).

There are a couple of things I particularly admired about the movie. The pacing, I thought, was spot on. It never dragged or outstayed its welcome, and the story (particularly the ongoing subplot with a gang of religious fanatics) moved briskly and confidently. Visually the film looked a treat and took full advantage of some stunning locations. Whilst you get the feeling that you’ve seen this before, or something very similar at least, there are enough flashes of real originality to keep your interest – for example the fanatical brotherhood ‘bombing’ a small community with vampires from a helicopter. 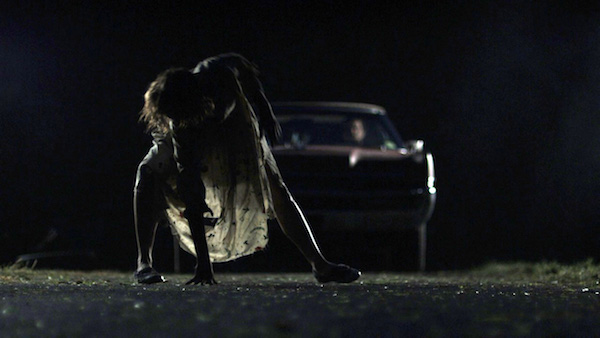 And the helicopter attack itself is a great example of the less is more approach on display here: you never see the helicopter, you just hear it and see its swooping search light and devastating after-effects. The threat is implied rather than overtly shown. Throughout the movie this is the case. There are millions of vamps, but we see only a handful. The director shows us what we need to see, and doesn’t risk undermining the integrity of the movie by stretching the budget and breaking the bank. The scale of the devastation is implied and understated, yet keenly felt throughout every scene.

I’ve often argued that there’s a lot of common ground in movie monsters: zombies tick many of the same boxes as vampires, who tick some of the same boxes as werewolves, and so on. I think that can make it harder for authors and filmmakers to create a distinct world and tell an original story. The team behind STAKE LAND achieve that here by displaying a real confidence with the material. There’s no sense of them pandering to their potential audience, you get the feeling they just made the movie they wanted and told the story they wanted to tell. The end result is something that’s tonally closer to THE ROAD

than, for example, DAYBREAKERS

, and that has to be a good thing!

Late to the game, I know, but I recommend STAKE LAND

to you without hesitation. And I’ll make a point of seeing THE STAKELANDER as soon as I can. The first film is available now on DVD and to stream on Amazon

and Netflix in the UK.