Absolutely no irony whatsoever is intended in the title of this post.

and I go a long way back. My interest was piqued when the first film came out in the late 1970s. The UK was a dull and repressed place in many ways back then and, as a nine year old, I remember hearing a respected film critic (Leslie Halliwell, I think) say that Mad Max was so violent it would never be shown on TV, and that, of course, just made me even more desperate to watch it. How times have changed. What would Mr Halliwell think had he still been alive today to see the newest Mad Max movie becoming such an incredible, and largely unexpected, cultural goliath?

– was something else entirely. As a Cold War Kid, I think it had a lot to do with the apocalyptic setting of the second film, and the fact we were watching a character we’d grown to know in the ‘normal’ world, having to deal with the nightmare of a post World War III (we presumed) existence. That’s something that’s always appealed to me. It’s one of the reasons THREADS remains so chilling today – we grow attached to characters in the relative normality of their day-to-day existence, then follow the hell they endure when their lives are, quite literally, blown apart. Road Warrior set new standards and paved the way for a thousand pale imitations.

I even enjoyed MAD MAX: BEYOND THUNDERDOME

, though the years have been less kind to the audience-friendly third movie in the series and unlike the timelessness of the other films, it feels rooted in the 1980s (thanks in no small part to Tina Turner and her ubiquitous title song).

Back to the point of today’s post: MAD MAX: FURY ROAD. Sure it’s an incredible spectacle: a non-stop, adrenalin-fuelled, action rush of movie. But it’s also so, so much more than that.

You’ll no doubt have seen the many euphoric reviews the new movie has received. It’s currently standing at an incredible 98% on Rotten Tomatoes. There’s no denying it’s a heck of a spectacle which is worthy of all the hyperbole. It looks beautiful and moves at a breathless pace. Performances across the board are strong, particularly Charlize Theron and Nicholas Hoult. I’ll be completely honest – I’m less enamoured with Tom Hardy’s performance as Max, but in the context of this film, that’s not hugely important. 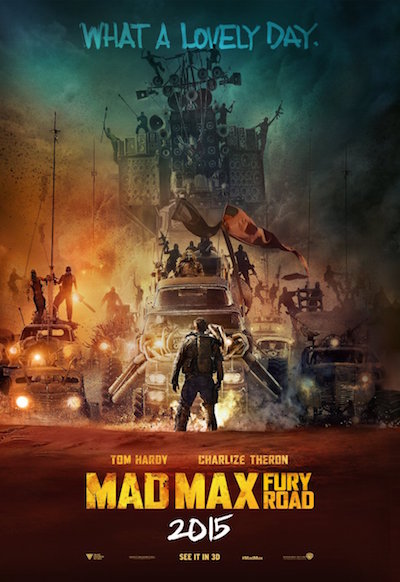 The film might bear his name, but this story isn’t about Max. In this instalment more than any other, he feels to me like a conduit, a means by which we’re able to observe. He’s by no means a bystander, but Max is dragged into events unintentionally and whilst he makes some key decisions and takes some crucial actions, it’s not all about him.

Max isn’t a typical hero. Despite having all the trappings of a blockbuster lead, he doesn’t behave as you’d expect. In this world, life’s about surviving, not living. He does what he has to do, when he has to do it, and you get the very definite impression that this is how he gets through every day. Out in the post-apocalyptic desert, this is what it means to stay alive. There’s a level of desperation to Max’s actions, a feeling of choices having to be made… Max rarely plots or plans, he just reacts.

Much has been made of the fact George Miller didn’t so much as write a script for FURY ROAD, instead he drew it. The action was storyboarded in advance, with almost 500 hours of raw footage eventually being captured out in the Namibian wilds. Again, this speaks volumes about the subtlety of this film. It feels organic. It feels natural. Nothing is crowbarred into place. I mentioned the pace earlier. This movie doesn’t follow the usual action film formula. This movie feels like a chase – run, catch your breath, run, catch your breath, run… and so on. Boiled down, the plot is beautifully simple (mild spoiler ahead) – escape (and fight), run (still fighting), reassess, run (and fight) back. We don’t get bogged down with unnecessary exposition and subplots. There are incredible action pieces and explosions because, at those points, there needs to be incredible set pieces and explosions, not just because they’d look cool on posters/ in the trailer/ in toy shops.

But, for me, the biggest achievement in this movie is the world. It feels so real. It’s a million miles removed from the setting of the first film, and yet there’s no question we’re dealing with the same kind of people in the same kind of place. It’s all so damn plausible. The character’s names (as always with Max movies) make no sense but they just sound right: Immortan Joe, Imperator Furiosa, Rictus Erectus… we don’t know what they mean, but we know they mean something. Soldiers are War Boys. The neighbouring outposts are Gas Town and The Bullet Farm (which, no surprise, produce gasoline – guzzoline – and ammo respectively). And there are numerous nods to the previous films too: the musical box, the War Boys’ black and white appearance… 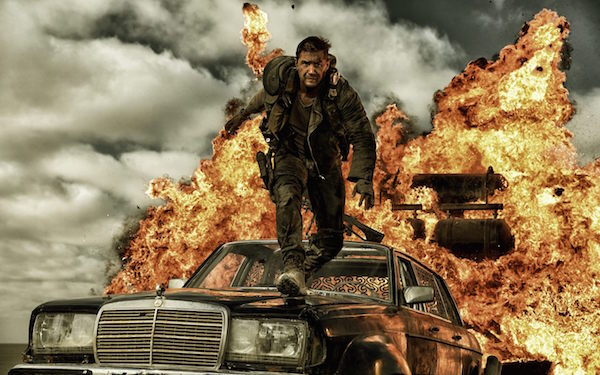 I guess this is the real point of this post. I enjoyed every second of MAD MAX: FURY ROAD and I recommend it wholeheartedly to everyone, but please, when you watch it, don’t just go for the car chases and big bangs. I’d urge you to look beyond that and enjoy spending a couple of hours in a nightmarish future. More than with any other recent film I can remember, I emerged from the cinema feeling like I’d just spent two hours elsewhere, not just two hours staring at a screen. I genuinely felt like I’d been stuck in the post-apocalyptic Australian outback. FURY ROAD doesn’t pander to any of today’s conventions, filmic or otherwise. We’re not offered endless explanations and expositions, we just have to work things out for ourselves. Max eats a two-headed lizard alive because he needs to eat, not because it looks cool. The War Boys spray paint their teeth because they believe they’re riding into their chrome Valhalla for Immortan Joe. Joe has a onsie-wearing blind guitar/ flame-thrower wielding warrior called Doof because it inspires his troops as they march into battle… I could go on. The detail on show here is incredible. It makes FURY ROAD an immersive experience, and this level of depth in a movie is a rare and beautiful thing which should be celebrated. It’s story-telling at its most basic and most effective.

FURY ROAD is a remarkable film. George Miller, I worship at your feet.