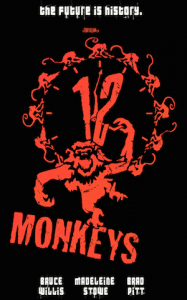 When Terry Gilliam is at his best, he’s untouchable. Two of his movies are in my top ten of all time, 12 MONKEYS and BRAZIL. Whilst BRAZIL is clearly influenced to a degree by his MONTY PYTHON days, 12 MONKEYS is an altogether darker and more serious affair.

My issue with a remake/reimagining/whatever you want to call it of 12 MONKEYS is that it’s unnecessary on every level. Though not perfect, I don’t see how Gilliam’s movie can be improved upon, certainly not as a SyFy channel TV series. I have a number of reasons for saying this:

First, the story is beautifully self-contained (and if you’ve already seen the film, you’ll know what I mean by that). There are no loose ends, no unanswered questions… it’s simply a wonderfully structured and complete tale. It’s a logical story: despite being set in different time periods and involving travel between them, the fantastical elements are presented with such passion and intelligence that it takes very little effort on the part of the viewer to suspend your disbelief. The mechanics of the time travel technology are inconsequential. It’s simply a means to an end, a MacGuffin. How Cole travels from 2035 to 1995 doesn’t matter – all that’s important is what he does when he gets there. This personal rather than technical focus means you buy into events completely.

Second, the cast and the characters they portray are uniformly excellent. Bruce Willis as Cole is a wonderful example of a nobody who suddenly matters to everybody: an ordinary man (a flawed criminal, in fact), who finds himself playing a pivotal role in trying to prevent the destruction of the human race. The fact he’s a victim of ‘the system’ in his past, present and future leaves us in no doubt of his fragility and desperation. To my mind, this is Willis’ best performance by a long way.

And he’s not alone. Madeline Stowe is equally strong as Kathryn Railly – a psychologist assigned to Cole’s case in 1995. Initially sceptical of his claims (who wouldn’t be?), events force her to constantly reassess everything she’s being told. Stowe’s performance adds another layer of plausibility to the film’s inherently implausible premise. The character is presented with an impossible question which has an equally impossible answer: is my patient insane, or is he really from the future, sent back in time to prevent the outbreak of a deadly disease which will destroy mankind?

And finally Brad Pitt. I’m not a huge Brad Pitt fan, but his performance in this movie as Jeffrey Goines – an inmate of the secure mental facility to which Cole is admitted in 1995 – is revelatory. A million miles removed from the floppy-haired hero of last year’s lacklustre WORLD WAR Z.

The look of 12 MONKEYS is another aspect well worth commenting on. I’ve already mentioned how this is a more restrained Gilliam movie than others, more muted, but his trademark design and visual flare is still there. Effectively this is a film about two different worlds (or, rather, two different versions of the same world), and whilst 1995 looks just like 1995. Gilliam’s 2035 is something else entirely: part I AM LEGEND-like dystopia, part Orwellian, BRAZILesque nightmare, his vision of the future is as inspired and confused as his characters’ situations. This contrast between the past and the future, the ordinary and the extraordinary, really helps to drive home the gravity and importance of Cole’s mission to save mankind. 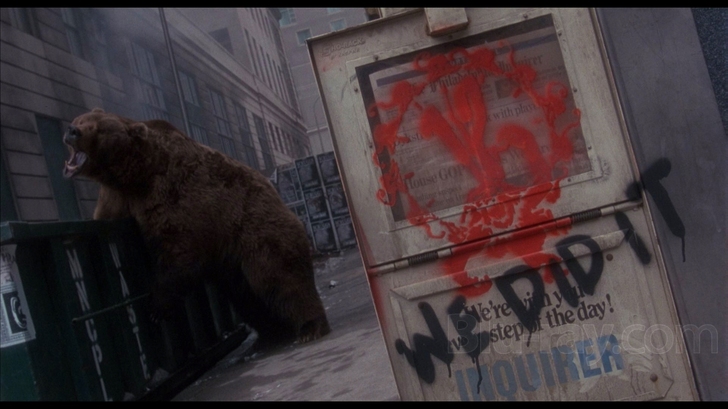 As you might have guessed, 12 MONKEYS is a film I’m always happy to recommend without hesitation. It’s a unique, landmark movie which deserves to be left alone and not tainted by a remake we neither need or deserve. So, please, if you hadn’t heard of 12 MONKEYS until you saw that trailer earlier this week, do yourself a favour and check out the original first.