Suffer the Children by Craig DiLouie 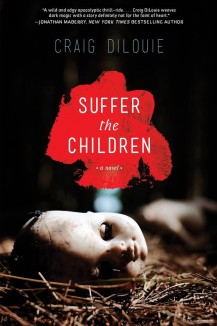 Now I like my character-driven horror fiction to be dark, but in his most recent book, Craig DiLouie has taken dark to a new extreme.

SUFFER THE CHILDREN (out now from Simon and Schuster/Permuted Press) is a genuinely horrific book, extraordinarily uncomfortable reading. DiLouie takes that most precious of things – the relationship between a parent and their child – and pushes it beyond breaking point. The synopsis follows. Click the link below for some thoughts on the book from Craig himself.

“One day, the children die. Three days later, they come back. And ask for blood.

With blood, they stop being dead. They become the children they once were.

But only for a short time. Too soon, they die again. And need more blood to live …

The average body holds ten pints of blood. How far would you go for your child?”

I asked Craig how he felt having written a book with such a disturbing premise. He told me “SUFFER THE CHILDREN is very different than my zombie books. It’s primarily psychological horror, grisly and chilling. The novel tells the story of a disease that strikes down the world’s children. Three days later, they come back and ask for blood. If the parents give them blood, they become the living, breathing children they once were, but only for a short time, forcing the parents to continually feed them. After a while, the only source of blood left will be each other.

The question becomes, how far would you go for someone you love? At what point does doing good become evil? These are daunting questions about our nature and instinct as humans–and the love expressed from that source–that are haunting readers of this book. I think it’s easy to say as a parent you’d put your arm in a shredder for your child. But would you put somebody else’s arm in a shredder? The concept fascinated me to an extent I had to write it.

The children in the book, yes, they’re something like vampires, but not in any traditional sense. They’re simply kids who need blood to survive, though they’re slowly changing. The real monsters in the book are the parents. They become monsters over time, with one little rationalization after another, and the evil some of them end up committing is horrible and macabre but also somewhat heroic, as they’re doing it out of love. The result is, I think, a story that horrifies readers, makes them think, and will haunt them long after they close its covers. Yes, it’s a dark read. I knew the novel would have less appeal than my zombie stories and, being horror, it’s more limited than general fiction, but it’s a powerful story I wanted to tell, and I’m proud of it. It’s honestly the most authentic and disturbing thing I’ve ever written. If you like horror, I think you’ll love this read.”

SUFFER THE CHILDREN is available now from Amazon, Barnes & Noble, The Book Depository, and Indiebound. Find out more about Craig and his work at craigdilouie.com.