BLOOD GLACIER aka THE STATION aka BLUTGLETSCHER 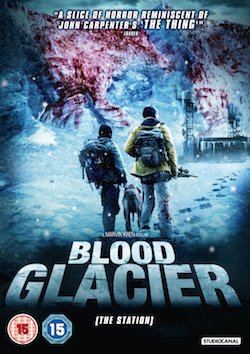 I enjoyed BLOOD GLACIER, but not as much as I’d hoped. It feels like a missed opportunity on a number of levels. The premise is beautifully simple: the liquid in the glacier has the effect of combining DNA from different hosts, therefore creating an infinite number of hybrid creatures. Trouble is, we barely see any of them. There’s a mutant fox, a bizarre buffalo-like beast, several gross insects and a pterodactyl-like bird of prey – some are excellently realised, others less so. In any event, the film-makers have to be applauded for their use of practical creature effects over CGI – this really helps develop the atmosphere of the movie and gives the uniformly strong cast something tangible to act against.

For me, the major problem is that glimpses of these creatures are fleeting and are few and far between, and some of the larger monsters are less than convincing. In some of the sales blurbs I’ve read, comparisons have been made between BLOOD GLACIER and another John Carpenter classic, ASSAULT ON PRECINCT 13. Such comparisons are, I think, a little optimistic. You never really get the sense that the scientists (and, eventually, politicians and various other hangers-on) are truly under siege: the lack of monster numbers and the infrequency of their attacks mean there’s little in the way of suspense in crucial scenes.

All things considered, BLOOD GLACIER is well worth your time. Apart from the issues I’ve mentioned, it’s a lot of fun to watch. Performances are excellent, the film rattles along at a decent pace, and it looks beautiful. A proper old-school monster movie.

In the UK the movie is available on DVD or you can stream it on Lovefilm. It’s also available in Germany. Apologies, but I can’t find any information about a US release as yet. I’ll update this post if I hear anything.