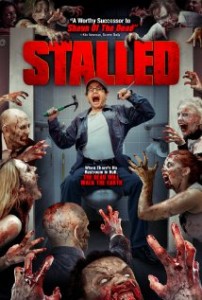 If you read my post earlier this week from Grimmfest, you’ll know how much I enjoyed STALLED, a great new British zombie movie. I couldn’t find any release dates (other than VOD in the US from 20 October), but I wanted to give you a heads up so if you see the film showing anywhere, you can make sure you catch it.

Zombie movies are, as we all know by now, easy to get wrong. There’s a tendacy to veer towards clichés and gore at the expense of the story (though I accept there are a huge number of folks who just want clichés and gore…). To my mind, the same is true of both straight-laced zombie movies and comedies (I refuse to call them zomedies, though lots of people apparently do). Okay, so you can have a laugh finding endless gruesome, slapstick ways to get rid of the undead (I’m looking at you here, Zombieland), but I think all zombie stories, whether being played for laughs or not, need a solid plot and characters you give a damn about to succeed.

I’ll be honest, I went into STALLED thinking I was going to hate it, but I couldn’t have been more wrong. Watch the trailer then hit the link to read more.

Written by Dan Palmer (who also stars), and directed by Christian James, STALLED is the tale of WC, a building janitor who becomes trapped in the ladies toilet… at Christmas… during the office party… just when the zombie apocalypse kicks off. I know what you’re thinking, but hold on… STALLED actually works!

Reminiscent of Peter Jackson’s early movies, the film moves along at a cracking pace as WC tries to escape from the bathroom (which is rapidly filling up with ravenous corpses). On the face of it, it sounds like a five minute gag that’s been stretched out to feature length, but it’s far, far more than that. Sure, there’s an abundance of zombie pratfalls and plenty of toilet humour (pun completely intended), but it’s all carried off with great style and self-awareness. When WC discovers another survivor hiding in the third cubicle along, a beautifully played out story unfolds of two outsiders coming together under desperate circumstances.

If you haven’t guessed already, I heartily recommend you keep an eye out for STALLED and watch it at your earliest opportunity. Here’s a five minute clip from the beginning of the movie to keep you going until then…

Wayne and I had the opportunity to host a Q&A at Grimm with, amongst others, the producer and director of the movie. I asked where the bizarre idea for the film came from. Christian James explained the genesis was a conversation about trying to survive a zombie attack in an increasingly tight and restricted space. Smaller and smaller scenarios were considered until they ended up with a toilet cubicle. And it struck me while I was watching the film, there’s very little difference between being trapped in an isolated farmhouse or your barricaded home, and an office toilet. Your options are limited, your supplies (if any) will soon become exhausted, and as hard as you’re trying to get out, the living dead will be fighting to get in. So don’t write off the setting for STALLED before you’ve seen the movie… the toilet isn’t somewhere I’d want to be stuck when the dead rise!

The film’s official website can be found here: www.stalledmovie.com, and there are also Facebook and Twitter pages. Keep an eye on these for release details which I’m sure won’t be long coming as the film just won the prestigious Melies D’argent Award at the Lund International Fantastic Film Festival. It’ll be showing as part of the annual Day of the Undead festival in Leicester on 16th November. I’m looking forward to catching it again and hopefully I’ll see some of you there.