Something else I’m planning to do with increased regularity throughout 2012 is recommend more books. I have a massive ‘to read’ pile which I’m steadily working my way through (actually, make that a ‘to blurb’ pile*), and I thought it would be good feature here some of the books I’ve recently blurbed and genuinely enjoyed. No reviews as such, just the publisher’s blurb, my blurb and, occasionally, a few words from the author.

Okay, I’m several months late with this one, and most self-respecting zombie fans will already know about it or own it, but I’d like to recommend Jonathan Maberry’s DEAD OF NIGHT. 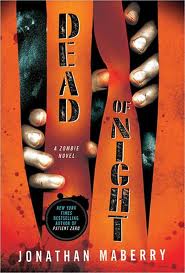 “A prison doctor injects a condemned serial killer with a formula designed to keep his consciousness awake while his body rots in the grave.  But all drugs have unforeseen side-effects.  Before he could be buried, the killer wakes up.  Hungry.  Infected.  Contagious.  This is the way the world ends.  Not with a bang… but a bite.”

Great stuff as usual from Maberry. This is a fast-paced, by the numbers zombie story, written with confidence and style by a man who knows a thing or two about the living dead. I have a fascination with what goes on inside a zombie’s brain: do they remember anything? Are they trapped and helpless? Are they as evil as we frequently assume them to be, or are they victims too? One of the highlights of Dead of Night for me was the way Maberry handles this question, presenting a terrifying disconnection between the reanimated corpses and the conscience which once controlled them.

I said: “Dead of Night stands drooped head and lurching shoulders above most zombie novels. The nightmare increases exponentially – from minor outbreak to major crisis with unstoppable speed, building to a heart-stopping climax you won’t be able to put down.”

* On the subject of blurbs – I’ve committed to enough to last me about six months, and I’m steadily working my way through them. Please don’t send any more my way, because there’s just no way I’ll be able to read them for the foreseeable future. Sorry to be a pain. Thanks for understanding!