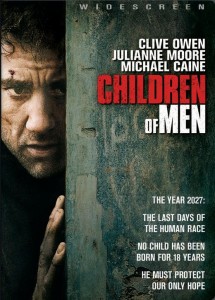 It’s been far too long since I recommended any films on this site. Here then is another classic up for consideration as part of my Post-Apocalyptic Movie Club. I’m going to try and post these with much more regularity throughout 2012.

The film I’ve chosen today is one of my all time favourite movies, and one of those rare instances when a film adaptation clearly surpasses the source material. I’m talking about CHILDREN OF MEN, directed in 2006 by Alfonso Cuaron, and starring Clive Owen, Michael Caine and Julianne Moore.

Where do you begin with a film like this? It’s a matter of personal tastes of course but, for me, Children of Men is almost note perfect.

Back in 2009 when I was writing Dog Blood, I talked a lot with my editor about world building – creating a believable environment in which your characters can interact and your story can take place. There’s a lot of clumsy science-fiction out there where the technology becomes the focus – the MacGuffin if you like – diverting the audience’s attention from the plot. Landmark films such as Kubrick’s 2001: A Space Odyssey and, of course, Blade Runner, presented alternate visions of the future where people simply go about their lives as we do, but using the tools and technology of the future. Deckard doesn’t bat an eyelid when he gets into his flying car – he just gets into his car. In 2001, Dave and Frank casually check the news on their tablet computers (which just so happened to pre-date the iPad by 50 years or so). Do you see what I’m getting at? Although more than 40 and 30 years old respectively, both films still hold their own, not least because of the plausible landscapes in which they’re set.

Children of Men takes place in a dystopian world which feels both incredibly real and uncomfortably close. It’s based on a 1992 PD James novel, but other than keeping the basic premise it deviates considerably from the original text. (An interesting side-note: PD James has a home in Southwold and part of the novel takes place in the town. Southwold, of course, is also where Danny McCoyne makes his last stand in Them or Us, the final Hater book.)

It’s 2027, and it’s 18 years since the birth of the last baby. The human race has, for reasons unknown, become completely infertile. A former political activist (Theo, played by Owen) is recruited by his ex-wife (Julian – Julianne Moore) to help smuggle a female refugee out of the country to reach the Human Project, a ship-based sanctuary floating somewhere on the English Channel. And why is this particular refugee so important that people are willing to risk their lives for her? Because she’s pregnant.

Children of Men makes for an incredible viewing experience. I began this post by talking about world building, and it’s here that the film really comes into its own. I can’t recall having ever seen a more gloriously visualised world. It’s clear that society is crumbling, and the landscape seems to be decaying along with the aging population. There are some wonderful visual treats here, and the level of detail shown is remarkable. Check out the passing shots of the corpses of farm animals burning in the fields; the frothing sewage pumping out into streams unchecked; the dilapidated school buildings, unused for years… My personal favourite – and this perfectly illustrates the level of detail we’re talking about here – the grubby London 2012 sweatshirt Theo wears in the final scenes in Bexhill. Bear in mind that this film was made in 2006…

But it’s not just how the film looks that makes it special, it’s also how it moves. There are some wonderful extended scenes which, to me, are just breath-taking in their execution. The editing, camerawork, special effects and direction combine to devastating effect on several occasions when scenes of apparent normality descend into chaos in what appear to be seamless, single takes. Theo’s narrow escape from a terrorist bomb in the opening scenes is one such example, an attack on a moving car another. All of these pale into insignificance, however, alongside the climactic confrontation in Bexhill. There are spoilers ahead, but do check this out:

Extraordinary. As you’ve no doubt gathered, Children of Men comes highly recommended. I’ll not spend an age going through the ins and outs of the story, or discussing the performances of the uniformly excellent cast, instead I’ll just suggest that you get hold of this film and watch it. If you’ve already seen it, watch it again.

Next time at the Post-Apocalyptic Movie Club – a slice of obscure, made for TV, 1980’s US Cold War drama.

Tagged  Alfonso Cuaron, Children of Men, Clive Owen, David Moody, Dog Blood, Hater, Julianne Moore, Michael Caine, PD James, Post-Apocalyptic Movie Club, Southwold.
Bookmark the permalink.
HTML Snippets Powered By : XYZScripts.com
I use cookies to ensure that I give you the best experience on this website. If you continue to use this site, I will assume that you are happy with this. Thank you. OkRead more