Return of the Living Dead

If you follow me on Instagram, you may have seen that I’ve had a little trouble working recently. We lost our family cat, Tom, early on in lockdown, and our new kitten arrived this week. Lovely as he is, when everyone else went out and I was left cat-sitting, young Milo prevented me from doing anything constructive other than catching up with the latest issue of SCREAM MAGAZINE (which happens to contain a fantastic 5-star review of THE BLEED: RUPTURE – thanks Scream team). 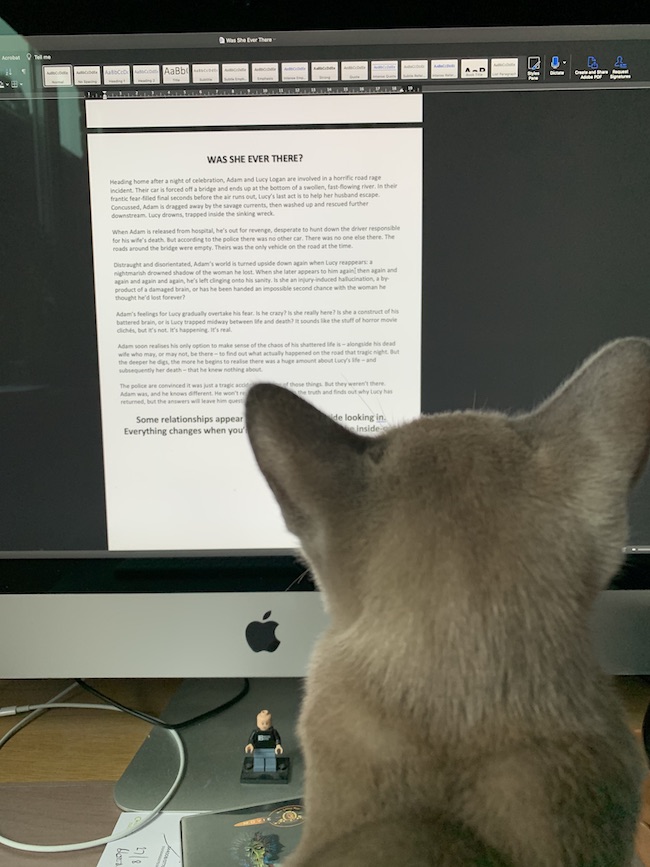 One of the things I love most about SCREAM is the fact it spends as much time looking back as it does forward: as well as up-to-date news and reviews, the mag always also features articles on classic (and sometimes no so classic) horror movies. This issue has an excellent retrospective article on THE RETURN OF THE LIVING DEAD. So, stuck with the new cat, and with little prospect of getting any writing done, I decided a re-watch of RETURN was in order. And as I realised I’d never properly written about it for this site, I decided to put that right too.

When foreman Frank (James Karen) shows new employee Freddy (Thom Mathews) a secret military experiment in a supply warehouse, the two klutzes accidentally release a gas that reanimates corpses into flesh-eating zombies. As the epidemic spreads throughout Louisville, and the creatures satisfy their hunger in gory and outlandish ways, Frank and Freddy fight to survive with the help of their boss (Clu Gulager) and a mysterious mortician (Don Calfa).

I’m sure you know this already, but here’s a little background on RETURN OF THE LIVING DEAD. It’s written by John A. Russo, who co-wrote the original NIGHT OF THE LIVING DEAD with George Romero. When he and Romero parted ways, a legal agreement allowed Romero to continue making “…of the Dead” zombie films, while Russo’s films had to be titled “…of the Living Dead”. RETURN OF THE LIVING DEAD was originally intended as a serious, straight-up sequel to NIGHT, and whilst it is still indelibly connected to the Romero classic, it’s completely different tonally. It’s hilarious.

Hard to believe that RETURN is 35 years old. Before re-watching it this week, I don’t think I’d seen it since the 1990’s. I was expecting it to have dated horrifically and, in many ways, it had, and yet I was surprised by how downright funny the film still is. Think zombie comedy, and many people will probably think of SHAUN OF THE DEAD (I’m not at all a ZOMBIELAND fan, sorry). SHAUN is also a classic, and I think it shares a reason for its success with RETURN OF THE LIVING DEAD. At their heart, both films are well made zombie movies that tell familiar, well-trod stories. Both films also feature a cast of idiots. There’s a subtle (yes, subtle – bear with me) point to be made here; the joke’s on the living, not the dead. And this is why I’m not a ZOMBIELAND fan… finding ever more ‘hilarious’ ways to despatch a reanimated corpse is nowhere near as much fun as watching a group of morons trying to survive a zombie apocalypse. And the morons in RETURN really are first-class idiots. 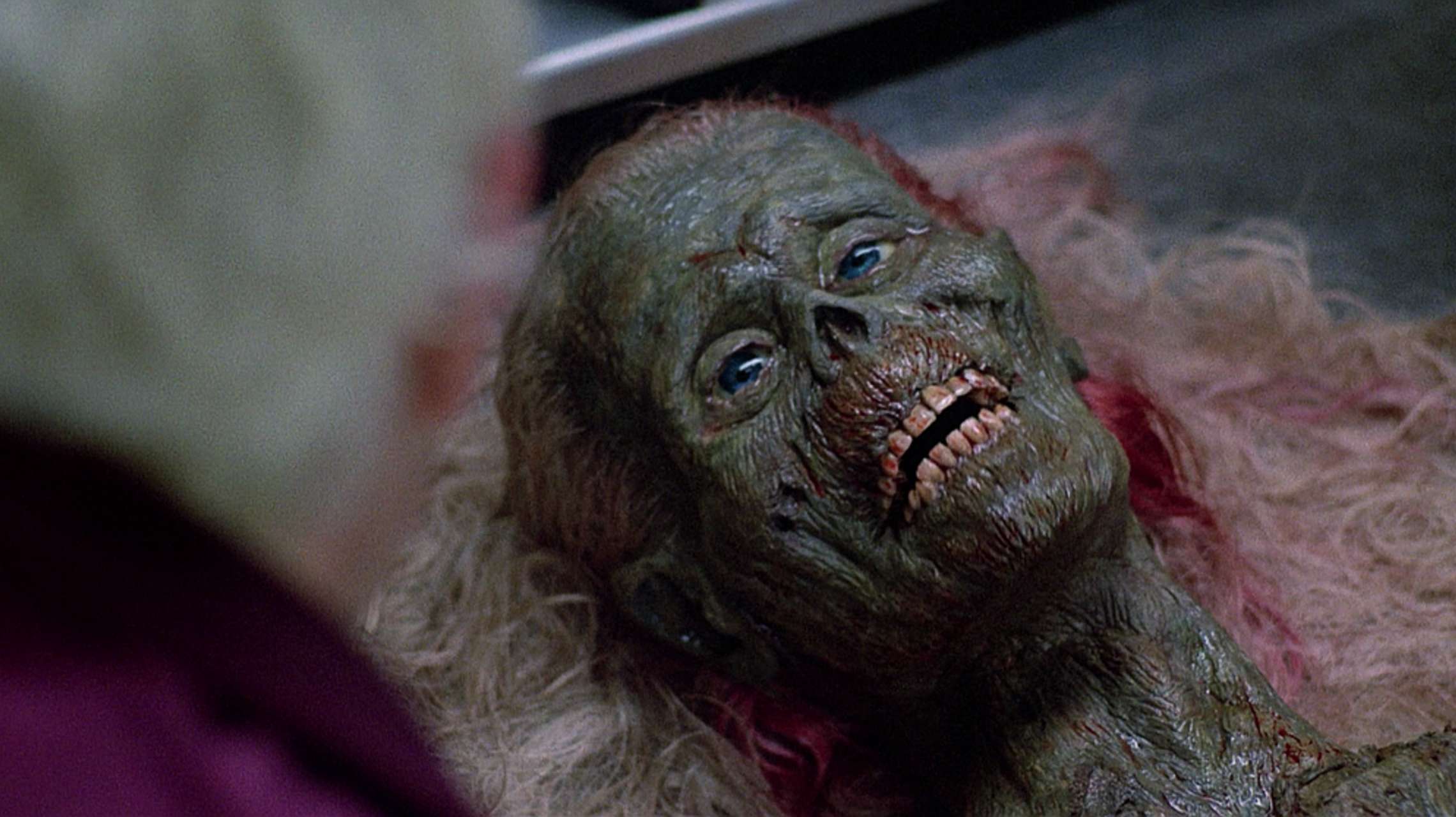 The cast is pretty much perfect; an intriguing mix of unknowns and horror stalwarts. And it’s the interplay between them that makes the movie a joy to watch. In particular, Thom Matthews, James Karen and Clu Gulager are exceptional as the completely inept workers and boss of the medical supply warehouse. The scenes where Fred and Frank come clean about what they’ve done and what’s happened as a result are priceless. They’re ably supported by a bunch of punks and preppies and misfits who’d probably be happier killing each other than getting rid of zombies. Special mention has to be made of Linnea Quigley as Trash – a nihilistic punk who’s fascinated with a) death, b) sex, and c) taking off her clothes. Her appearance in this film deeply affected many young men of a certain age when the first was first released. Me included.

There was a lot of talent behind the camera too. The film was directed by Dan O’Bannon, who many people will remember as the writer of several genre classics (and no-so classics) including ALIEN, DEAD & BURIED, BLUE THUNDER, TOTAL RECALL and LIFEFORCE. Much has been made of O’Bannon’s inexperience behind the camera and the uncomfortable relationship he had with his cast, and you can’t help thinking this awkwardness might have contributed to the eventual feel of the film. There’s a definite clash between the punks and the establishment, with them both being undone by the living dead.

Production designer was Bill Stout, an artist with a background in comics and fantasy art. Though the living dead in the film are largely generic, particularly in crowd scenes, Stout takes credit for two classic zombies – the astonishing Tar Man, and the truncated (and badly decayed) dead woman, complete with a severed spinal cord that thrashes around wildly on the autopsy table. 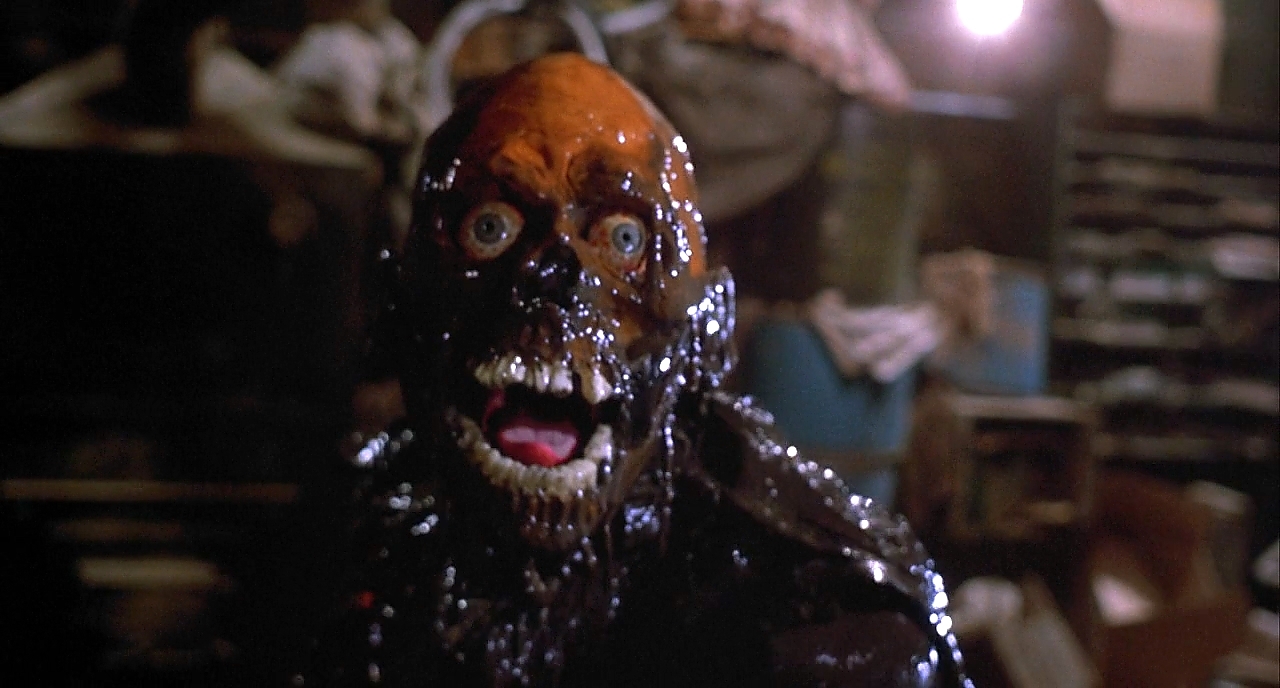 If you haven’t seen RETURN OF THE LIVING DEAD yet (surely you must have by now?) then can I recommend you put that right. It’s great entertainment, and even though it’s ridiculous and plays fast and furious with Romero’s original zombie rules, it still manages to work as a quasi-sequel to NIGHT OF THE LIVING DEAD. It’s a lot of fun throughout, right the way to the surprisingly bleak and laugh-free final scene. A number of sequels followed, though I’d recommend you stop after number three.