I do love a good disaster movie. Trouble is, they don’t make them like they used to. These days they tend to be bombastic and CGI-heavy and usually a). don’t make a lot of sense, and b). star ex-wrestlers.

My wife and I went on holiday to Norway last month, and while we were away I was reminded of a fairly recent disaster movie that I actually enjoyed. I thought it would be a good recommendation for this site. And why was I reminded of this particular film? Because our cruise ship docked in Geiranger, the beautiful and idyllic little village which is wiped out by THE WAVE (Bølgen). Here’s a photo of Lisa soaking up the sun and looking down on the village, just after telling me she hadn’t enjoyed the bus ride up the mountain, so we were going to have to walk back down… 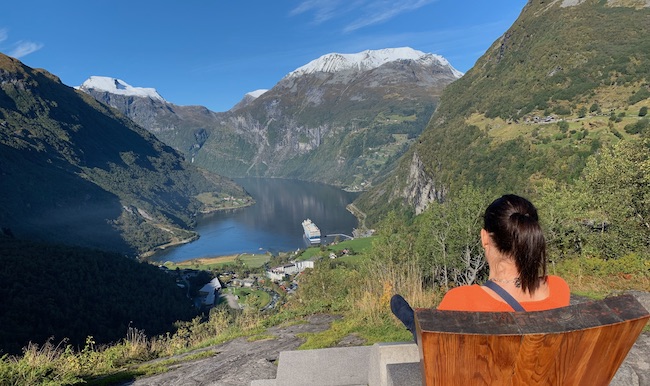 Although anticipated, no one is really ready when the mountain pass above the scenic, narrow Norwegian fjord Geiranger collapses and creates an 85-meter high violent tsunami. A geologist is one of those caught in the middle of it.

I don’t think I’ve ever visited a country that’s as effortlessly beautiful as Norway. While we were there it seemed that every time we looked up there was a waterfall or a fjord or a snow-capped mountain in view. It’s also very different to where I live smack-bang in the middle of the UK, in that towns and villages in Norway are often separated from each other by huge distances with tunnels, bridges and ferries being an integral part of everyday life. It was a quiet, tranquil and relaxing place to be, but it’s no great stretch to imagine those same towns and villages being isolated and exposed in the event of a disaster such as the tsunami which destroys Geiranger in THE WAVE.

The reality of the story is stark: in 1905 and 1934, rockslides triggered tsunamis which killed more than 130 people. Scientists know the same thing is likely to happen again, but they’re unable to predict when. The mountain of Åkerneset, a few miles north of Geirangerfjord, is unstable.

So there we have the set up for this movie; a terrifying, plausible, unstoppable disaster which could (genuinely) strike at any moment. And perhaps that’s one of the main reasons why I found THE WAVE to be such a satisfying movie. There’s no need for over-sensationalism. There’s no need for a A-list Hollywood celebrity to come in and save the day. Ultimately, there’s nothing the people of Geiranger can do to prevent what’s coming, it’s just a question of getting away from the danger when the alarm bells sound.

At its heart, THE WAVE is about a small community dealing with an event of enormous magnitude. The story focuses on Kristian Eikjord and his family. He’s a geologist monitoring the mountain, and they’re about to pack up and leave the village as he’s taken a new job in the city of Stavanger. His partner Idun has another couple of shifts left to work at the hotel, and the family is split. As Kristian and the kids are about to board the ferry to leave, unusual readings are detected in the mountain… 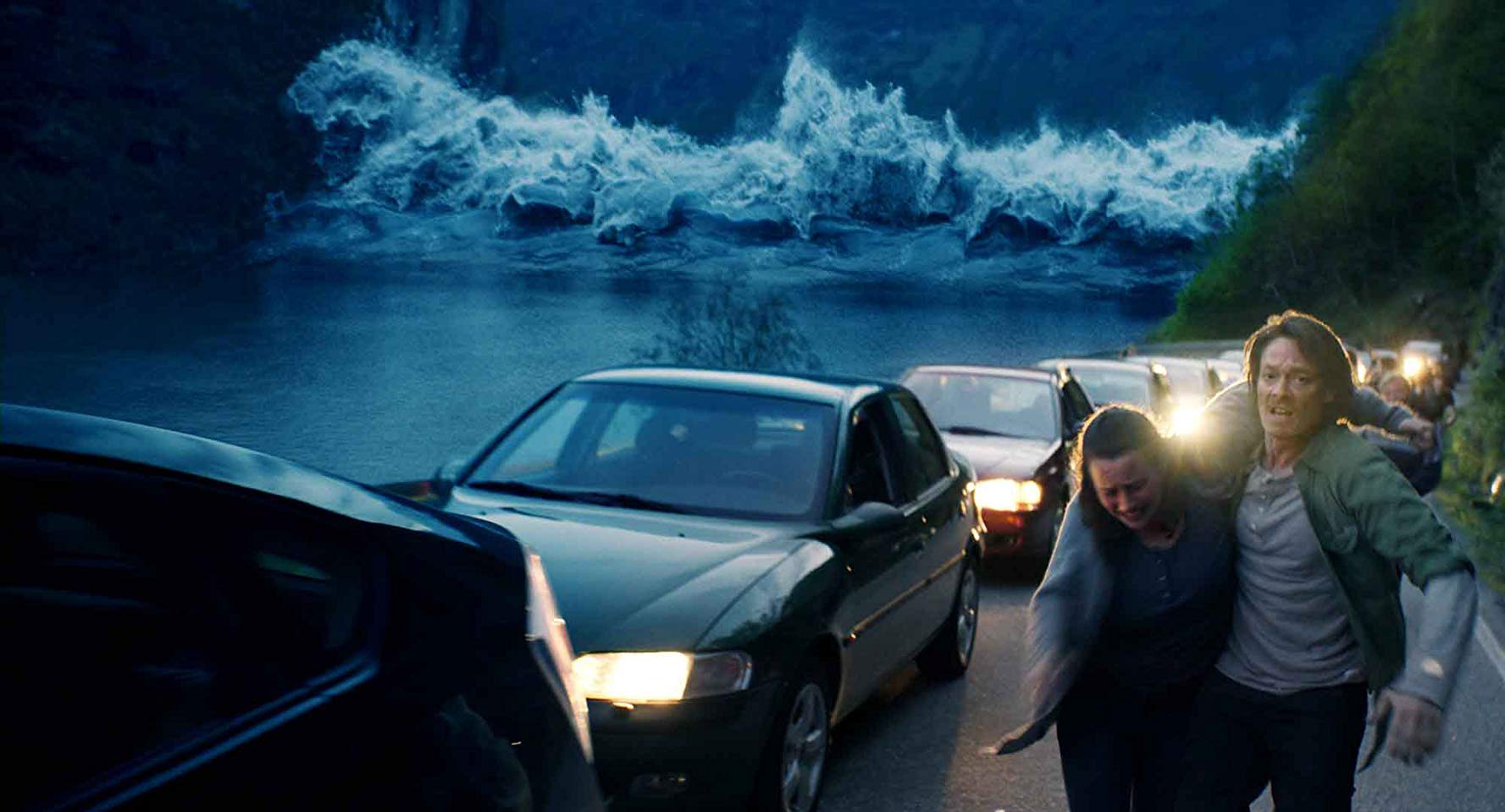 Okay, so you get all the usual disaster movie clichés with THE WAVE, but they’re handled in a (largely) logical way. People do all the stupid things you’d expect, and there’s the occasional stroke of luck and almost super-human feats, but that doesn’t matter so much because the small scale of the movie and the plausible set-up and execution allow you to suspend your disbelief. Other than the family themselves, the remaining characters are often thinly developed, but again, your focus is on the four people who matter. Actors Kristoffer Joner and Ane Dahl Torp are particularly good, and director Roar Uthaug (what a brilliant name) keeps the action moving along at a great pace.

Many people watch disaster movies for the devastation and special effects, and despite the beautiful and limited location, you certainly get your money’s worth in THE WAVE. The wave itself is well rendered, and you can almost taste the water as you follow Kristian through the ruins of Geiranger.

THE WAVE is definitely worth a couple of hours of your time. It’s available on bluray now if you’d like to take a look (and I’ve just discovered there’s a sequel – THE QUAKE). If you enjoy it, can I make a further recommendation? If you ever get the chance to visit Norway, please do. It’s a remarkable place.