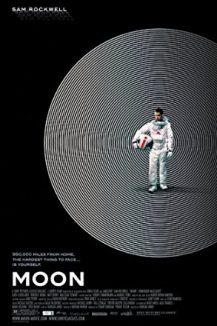 How long’s it been since I recommended a film here? A quick glance back shows that it’s 4 months since I talked about the plusses of PADDINGTON 2 versus the negatives of ALIEN: COVENANT, so a new recommendation is well overdue. I watched Duncan Jones’ MUTE last night, and though I tried hard to love it, I could only like (bits of) it. MUTE hit Netflix earlier this month, and it piqued my interest because it takes place in the same movie universe as Jones’ first movie, MOON. To my mind, MOON is one of the best films of the last decade, and I realised I’d never recommended it on this site. So here goes.

Astronaut Sam Bell’s (Sam Rockwell) three-year shift at a lunar mine is finally coming to an end, and he’s looking forward to his reunion with his wife (Dominique McElligott) and young daughter. Suddenly, Sam’s health takes a drastic turn for the worse. He suffers painful headaches and hallucinations, and almost has a fatal accident. He meets what appears to be a younger version of himself. With time running out, Sam must solve the mystery before the company crew arrives.

Where do I start? There’s so much to love about this film. Let’s begin with the production design. The visuals are exquisite, and the use of miniatures rather than CGI give the film a unique appeal – there’s enough to be reminiscent of Gerry Anderson’s live action TV series of old such as SPACE 1999 and UFO, but at the same time the technical skill here is bang up to date. Inside the base, the sets have an inherently plausible grubbiness and functionality about them which recalls the original ALIEN. This is a future rooted firmly in the present. It’s a gritty, greasy, nuts and bolts kind of industry which is all the more plausible for a layer of dirt. The computer, Gertie, despite being voiced by the now-disgraced Kevin Spacey, retains its impact by communicating largely through emojis. It sounds like it shouldn’t work, but it does.

And then there’s the music. A wonderful score courtesy of CLINT MANSELL with a driving, piano- and drum-led theme which has been a staple of my writing playlist since the film first came out. The score is at once cavernous and intimate, and that perfectly reflects the premise of the film: an astronaut operating huge machinery, completely alone in the vastness of the moon.

But all this apart, there are two reasons you need to watch MOON if you haven’t already. First is the story. It’s simple, but it’s superb. The film is wonderfully self-contained and satisfying, and I’m going to say absolutely no more about it now because the last thing I want to do is spoil it for those who haven’t yet watched. The second reason is SAM ROCKWELL. His performance(s) as Sam Bell are what elevate this film from being a cool-looking movie with a neat twist to being a compelling, heart-breaking tour-de-force. I guarantee you will forget you’re watching one actor playing dual roles. 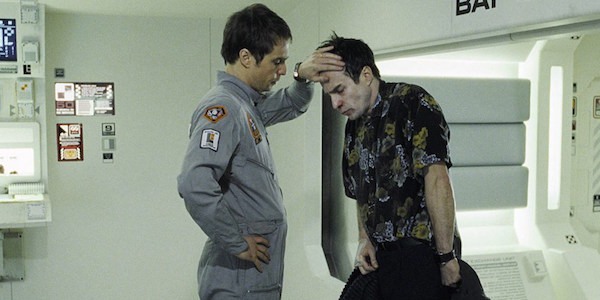 You might have guessed by now that I love this film. It’s in my all-time top-ten, and I’m surprised I haven’t recommended it before. If you haven’t watched it, I really think you should. Go into it knowing as little as possible, and I think you’ll enjoy it as much as I did.

And as for MUTE… I thought it was a good-looking film full of massive ambition. MOON succeeded because of its intimacy, and ultimately I think MUTE suffers as a result of its scale. Again, there’s a solid story and strong performances, but the end result is nowhere near as satisfying as Jones’ debut feature. Watch both and enjoy both. And if you get lost in the fast-moving complexity of MUTE, you can still have plenty of fun looking for all the MOON references!