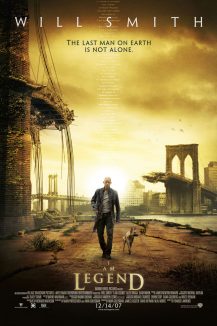 I guess the key learning point for me from this whole I AM LEGEND exercise is that while no one has made a wholly successful movie adaptation of the novel, there’s enough going on in Matheson’s post-apocalyptic world to keep even the most tenuous adaptations entertaining. In my mind there’s no question that LAST MAN ON EARTH

is the best version by far, but the other two both have things to recommend. THE OMEGA MAN

just about remains watchable because of its kitsch value. Similarly, I AM LEGEND

can be enjoyed because of its huge budget and its glorious realisation of post-virus New York. Dodgy CGI animals apart (and more on the dodgy CGI in a minute), there are some truly epic visuals. According to IMDB, the film’s budget was in the region of $150 million. I’m guessing half went on Will Smith and the other half went on the CGI. Unfortunately that left quite a big hole…

I was in Canada when the movie was released, visiting the set of the AUTUMN

film. As has been well-documented, the AUTUMN adaptation failed to capture the book spectacularly, but I remember sitting in the farmhouse set and chatting with members of the crew about how the newest adaptation of I AM LEGEND

I’ve written at length about what a huge influence Matheson’s novel was on me and on my work. I like to tell stories about ordinary people who find themselves trapped in extraordinary situations. You’ll find no action heroes, super-soldiers, brilliant scientists etc. in my grubby little tales of the apocalypse. And I always got the impression that was what Matheson was angling for too… Robert Neville is a flawed and broken man who retreats into the more dangerous regions of himself to try and survive, and he frequently fails. Will Smith’s smart and savvy hi-tech character is a version of Neville I neither recognise nor can identify with. He’s so bloody smart that I almost want him to fail. I feel nothing for the character, just annoyance as he plays golf off the deck of an aircraft carrier and races around overgrown Times Square in a fancy motor. What a dick.

But the film-makers make an even more devastating miscalculation with this adaptation of the book, and that’s in the portrayal of the infected. Remember the ghastly figures who knew Neville and who taunted him each night in the original novel and in the first film adaptation? The tortured souls damned to an infernal undead existence who inspired George Romero to kick-start the modern day zombie genre? Even The Family from THE OMEGA MAN

who resorted to a medieval lynch mortality to take their revenge on Chuck Heston for what the old world had done to them.

In this adaptation you get computer generated shadows. Cartoonish sprites without a hint of character or menace. Badly-animated ghouls that wouldn’t have looked out of place in a mid-range Xbox game. And that’s a real shame, because to my mind it leaves a huge part of the I AM LEGEND story untold, and that’s the real reason why this movie fails. For all of Mr Smith’s tortured face-pulling and his incredible dystopian surroundings, the lack of characterisation and thought afforded to his enemies leave an un-fillable gulf. We don’t care who lives or who dies. We feel nothing for Neville. We watch the credits roll up the screen and immediately forget about the movie we’ve just watched (and probably enjoyed). An enormous wasted opportunity, therefore, but one that’s not completely devoid of merit.

So there we go. One book, three movies. I know there are other adaptations (a BBC radio version and The Asylum’s I AM OMEGA

), but that’s where I’ll leave I AM LEGEND

for now. I do hope one day that someone returns to the book and makes a screen adaptation that’s worthy of it. Right now, though, I’d recommend you read the novel, check out LAST MAN ON EARTH, and leave it there.

I’ve really enjoyed this exercise. Think I’ll do it again next year with another of my major influences that’s been filmed three times… John Wyndham’s seminal THE DAY OF THE TRIFFIDS

Tagged  Alex Proyas, Autumn, Autumn movie, George Romero, I am Legend, I am Omega, John Wyndham, Post-Apocalyptic Movie Club, Richard Matheson, The Asylum, The Day of the Triffids, The Last Man on Earth, The Omega Man, Will Smith.
Bookmark the permalink.
HTML Snippets Powered By : XYZScripts.com