This week at the Post-Apocalyptic Movie Club, a little known gem from the 1980’s: SPECIAL BULLETIN. 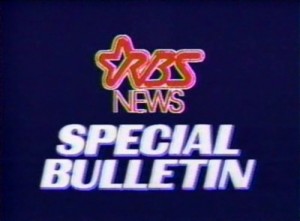 You might not have heard of this movie, but it’s certainly worth checking out. It’s a well done (for the time) faux news broadcast covering a breaking story. A group of terrorists have docked a boat in the port of Charleston, USA. It’s soon established that they’re a group of nuclear scientists and peace campaigners, and their demands are simple: the government has 24 hours to disarm the stockpile of 600+ nuclear missiles at a nearby military base and deliver the triggers to the dock, or they’ll detonate the nuclear bomb they have on the boat.

At the time of writing the whole film is available on Google Video and I’ve embedded it below. So why not watch it first, then come back and read my thoughts. In fact, for reasons which will quickly become apparent, I’d definitely recommend doing it that way. Okay, video first, my comments after the break.

It’s dated and it creaks and groans in places, but goodness me, Special Bulletin still packs a punch. In some ways its relevance has diminished (it’s a very definite product of the Cold War), but other aspects are still surprisingly relevant today.

Filmed in the style of a live news broadcast, the movie opens with news of a gun fight at the docks. A TV reporter – there to cover another story entirely – is taken hostage, and a live feed is established between the terrorists on the boat and the fictitious RBS news station in New York. Anchors Susan Myles (Katherine Walker) and John Woodley (Ed Flanders) cover the story as it unfolds. Direct footage of the protestors is interspersed with talking heads – scientists, politicians, local reporters and the like – as the twenty-four hour deadline approaches.

SPOILERS AHEAD! The US Government, refuses to accede to the terrorists’ demands, and when it’s established that the bomb on the boat is real, Charleston is evacuated. With the clock ticking, the authorities appear to have a change of heart, and abruptly agree to disarm their missiles and deliver the triggers as per the terrorists’ demands. However, the trucks which arrive on the dock carry a military strike force. The ship is stormed and all but one of the protestors killed.

The timer on the bomb has less than two hours left to run. A specialist team arrive at the dock to decommission the device but fail, triggering an anti-tamper device, and it explodes. A mushroom cloud rises over Charleston.

Special Bulletin succeeds largely because it’s an accurate approximation of a news broadcast (of the time). Shot on video tape and complete with all the TV logos, jingles and idents you’d expect, on the whole it feels surprisingly realistic. The story is relatively plausible, and even when it edges towards being far-fetched, the cast handle events with the required level of gravitas to keep the viewer onside.

As a kid watching this back in the 1980s, I’d not come across too many movies before with endings like Special Bulletin. I can still remember sitting in front of the TV, watching the footage of government scientists desperately trying to escape from the boat having tripped the device. Then the disbelief as the screen turned brilliant white for the briefest of moments before cutting back to the RBS news desk, the two anchors lost for words and overwhelmed with emotion. The explosion itself is handled well with the director wisely showing little of the devastation. In fact, the post-detonation scenes with the biggest impact are arguably the unsteady, out of focus shots of reporter Megan Barclay (Roxanne Hart), several miles from the epicentre of the blast. She stumbles around in shock with her cameraman, the rest of her crew lying dead around her…

Special Bulletin deservedly won a lot of praise when it was first shown. The original broadcast ran with frequent disclaimers (‘The following program is a realistic depiction of fictional events. None of what you are seeing is actually happening…’ etc.) in order to avoid panicking the viewing public. It has inevitably aged in many respects, and there are a few gaffes. The bomb itself, for example, looks like something out of Dr Who complete with standard glowing red LED countdown timers. One of the terrorists is played by Rosalind Cash who appeared in The Omega Man with Chuck Heston. Her TV news ‘mug shot’ when her character is first identified, actually appears to be a still from that movie! Several other actors also went on to become well known, and their familiar faces also spoil the faux broadcast illusion somewhat. 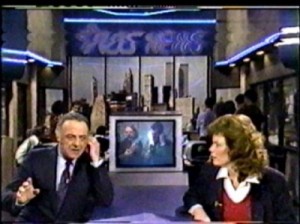 But if you can look past all of that, Special Bulletin is still a strong piece of drama. The world’s a very different place now, of course, and most people’s understanding of terrorism is a million miles removed from a handful of middle-class scientists on a boat with a bomb and a ransom note, but there are still parallels with how things are today. The governmental response (or lack thereof) to the unfolding situation, is plausible and chilling, and the film makes some really interesting points about how the media shapes and changes the news it reports with direct, twenty-four hour coverage and information overload. And in an entirely unintentional twist which really makes you think, in the background of the New York news studio throughout the broadcast, are the twin towers of the World Trade Centre.

If you’ve got ninety minutes to spare, I’d definitely recommend clicking the link above and watching Special Bulletin while it’s still there.

Next time… mainstream cinema screws up another movie about a pandemic.