I feel kind of obliged to say something about ARMY OF THE DEAD which arrived on Netflix this week. I can definitely say something, but it won’t be positive. I despised pretty much every second of it.

Following a zombie outbreak in Las Vegas, a group of mercenaries take the ultimate gamble, venturing into the quarantine zone to pull off the greatest heist ever attempted.

If you’re in need of a quick zombie movie fix this Sunday afternoon (and let’s face it, who isn’t?), can I recommend #ALIVE, a South Korean movie which is available now on Netflix. It’s nothing you haven’t seen before, but I liked it quite a lot.

As a grisly virus rampages a city, a lone man stays locked inside his apartment, digitally cut off from seeking help and desperate to find a way out.

Here’s a very long trailer (actually the first five minutes of the film):

Well this one came from out of nowhere and blew me away. Its release last year passed me by, and it’s only thanks to a casual mention of the title by a friend and coming across the movie whilst browsing Netflix that I watched it. And I’m so glad I did. I thought it was a fascinating study of loneliness – something that’s considered less and less in many twenty-first century post-apocalyptic films. The concept of being the last person left alive on the planet is something that used to be a staple of end of the world stories (with I AM LEGEND being an obvious example), and yet in today’s increasingly (superficially) interconnected society, it feels like an inevitable by-product of the apocalypse which isn’t discussed as often as I’d expect.

In THE NIGHT EATS THE WORLD our main character Sam is already alone. We meet him as he makes a return visit to his ex-partner’s flat in Paris – filled with people, noise and good times – hoping to collect the last of his belongings. He wants to get in and out fast but is persuaded to stay, and as a result of the booze he consumes to help him get through the obvious awkwardness of the situation, he passes out. When he wakes up next morning, the walls of the flat are covered in blood. He’s slept through the zombie apocalypse.

My turn. It’s YEAR OF THE ZOMBIE month 8. Summer holiday time. Sun, sea, sand, buckets and spades… and the living dead. It’s been far too long since I released anything, so I’m putting that right today. You can pick up SCRATCH

right now from AMAZON.COM, AMAZON.CO.UK, AMAZON.DE and others, and I hope you enjoy reading it as much as I enjoyed writing it. 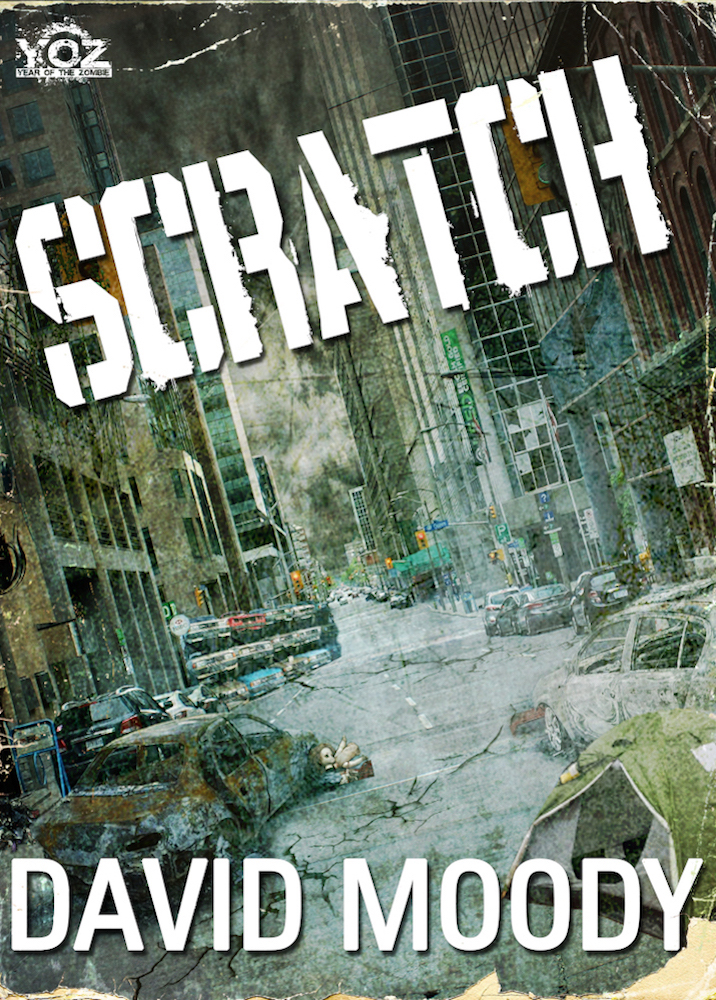 Jody’s up against it this morning. She’s stuck in a tent on her own with three kids in the middle of nowhere, and it’s the beginning of the end of the world. Her car’s on fumes, they’re miles from anywhere, and things are looking bleak.

It looks like there’s only one place left for Jody to go. Trouble is, it’s the last place on earth she wants to be. Impending armageddon and massive hordes of sick, undead creatures have nothing on the personal horrors she’ll have to face here.

Either way, she’s screwed. One scratch and it’s all over.

now from from AMAZON.COM.

was first released. Back then there were very few zombie novels about, and the living dead were nowhere near as prevalent in the mainstream as they are today. How things have changed. But AUTUMN’s

not the only anniversary coming up… 2016 also marks the fifteenth birthday of INFECTED BOOKS.

I reckon we should celebrate, so I’m putting these two events together and designating 2016 as YEAR OF THE ZOMBIE.

Next year Infected Books will be releasing twelve zombie novellas – one per month – from eleven of the best zombie writers out there. But wait… check the maths… It doesn’t add up – twelve releases but only eleven authors? That’s where YOU come in. From the press release:

“As part of YEAR OF THE ZOMBIE, we’ll be running a very special Pitch & Page comp via the Infected Books Facebook page. The comp will be judged by our very own Dragon’s-Den-esque panel of bestselling horror author and IB head honcho, David Moody, US literary agent, Gina Panettieri and Micheal Preissl of German and English language publisher, Voodoo Press. The winner will join our 11 established authors to have their novella released as part of Infected Books’ YEAR OF THE ZOMBIE. How cool is that?

And if that ain’t enough, we’ll have a few more surprises along the way, as well as a heap of zombie-themed prizes and giveaways courtesy of our sponsors.

I can’t wait for you to see who we’ve got lined up for this. More details in the coming weeks.

When I heard that Arnold Schwarzenegger

was starring in a zombie movie, I wasn’t interested. For me, the best zombie stories are about the surviving characters and how they deal with the dead, and by deal with the dead, I mean how they fight to stay safe and alive, not how many corpses they can kill and how big the guns and bombs they use are.

is superb, and the first Predator

movie is an eighties classic, but Arnie’s never been a personal favourite, and the thought of the ageing all-action, ex-bodybuilding, ex-politician rampaging through hordes of the living dead just didn’t appeal. When I heard more about the project – MAGGIE

– I became more interested. And when I got around to watching the movie, I realised my preconceptions were misplaced. MAGGIE’s

not perfect by any stretch of the imagination, but it’s a damn good little movie (yes, little movie), and Schwarzenegger is a revelation.

As a viral pandemic spreads across America, Wade Vogel (Arnold Schwarzenegger) searches for his runaway daughter Maggie (Abigail Breslin) and finds her in the quarantine wing of a hospital. Wade brings his daughter back home to his family for the short time before the teenager begins a painful metamorphosis.

Determined to hold onto his precious daughter as long as he can and refusing to hand her over to the local police Wade edges ever closer to a time where he will have to take matters into his own hands.

Today I’d like to introduce you to PETER MCKEIRNON – author of DEATH IN A NORTHERN TOWN and its recently released sequel. I got chatting to Peter a while back and was really interested in his take on the zombie apocalypse (which feels similarly low-fi to AUTUMN, but far funnier). In this guest post he talks about his influences. 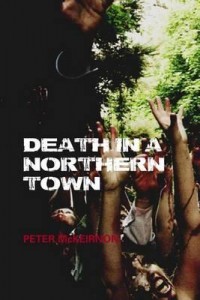 I have never seriously thought about my influences. Usually I am asked who my favourite author is or what my favourite zombie movie is, but when Dave asked me to write a guest article about what inspires my writing I began to consider, for the first time, what my real influences are. The answers take me back to my childhood and the horror movies, comedy shows and ultimately the town in which I grew up.

I grew up on a council estate in Runcorn, Cheshire, UK. One of the great things about the area I lived was that once a week a man driving an old Ford Escort would pull up at the top of our road, open the boot and rent out the shittiest collection of pirated movies you had ever seen. But within this mishmash of badly copied 1980s straight to video movies were classic horrors such as Killer Clowns from Outer Space, Munchies (camp Critters rip off), The Evil Dead, The Fly… the list goes on. What was so brilliant was you could rent up to 15 movies a week for £5 and the nice illegal video rental man really didn’t care that a kid who should be at home watching The Never Ending Story was instead renting copies of The Stuff, Class of Nuke ‘Em High, Troll, Garbage Pail Kids The Movie (not really for children, adults or anyone for that matter!) and Vamp.

Watching horror from a young age changed me greatly and where other kids on my estate played football and argued over who was going to be Kenny Dalgleish, Ian Rush or Peter Beardsley, I was busy scaring the shit out of family members by hiding behind doors and appearing at windows dressed up as a vampire or a werewolf! This was where my love affair with horror began. 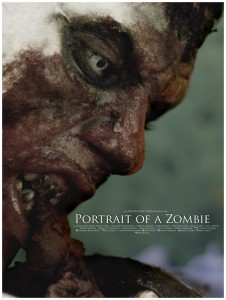 Back in February 2010 I stumbled upon the trailer for a new zombie movie I hadn’t come across before: PORTRAIT OF A ZOMBIE. I was so taken by the short clip that I posted it on this site and I also got in touch with the director, Bing Bailey. We spoke on and off over the years but it wasn’t until recently that I finally managed to watch the movie. I was browsing around Lovefilm one night, looking for a horror movie to watch which a). wasn’t crap, or b). I hadn’t seen a hundred times already, and there it was, right at the top of the list, just begging to be streamed.

And man, I’m glad I watched it. POAZ (as I’ll call it from here on in to save typing) was a real treat that I’m happy to recommend as part of my Post-Apocalyptic Movie Club. So please watch the trailer below, then click the link for my thoughts and a few words from Bing Bailey.

I’ve been waiting to talk about this for ages, and as it’s now been announced on the SFX website, I guess I finally can! 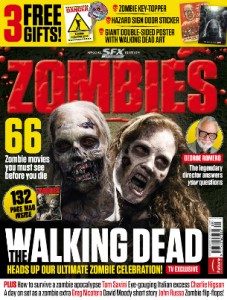 On 26th September SFX release their latest special issue – ZOMBIES: THE ULTIMATE GUIDE. Now any self-respecting zombie fan should immediately click here to order a copy, but if you like my writing (and as you’re on my website, I’m hoping you do), there’s another good reason to pick it up. As well as a huge number of zombie-related features, articles, reviews, and interviews (with George Romero, Charlie Higson, Mira Grant and myself amongst others), the magazine also features MURIEL – a brand new piece of original zombie fiction I’ve written exclusively for SFX.