The zombie community was shocked back in December 2009 when Z A Recht – author of Plague of the Dead and its sequel Thunder and Ashes – passed away unexpectedly. I’d only been corresponding with Z a week or so earlier, and his death shook me to the core. I was really pleased, therefore, when Permuted Press and author Thom Brannan completed the final book in the series – SURVIVORS – using the notes and drafts Z had left behind. When they asked me to provide a blurb, I didn’t hesitate. I said: “Taut and thrilling… brutal and unforgiving… Zombie fans will love this book”, and I stand by those comments. Here’s the back copy: 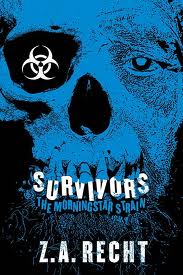 “THE MORNINGSTAR STRAIN WAS THE END OF THE WORLD.

In the wake of the zombie apocalypse, two separate bands of survivors journey across a decimated America, each with the desperate goal of finding the cure for the virulent plague that threatens the existence of humankind—or what’s left of it. Now it’s up to these inheritors of the future to outlive their waking nightmare, any way they can.

BUT FOR THESE SURVIVORS, IT IS JUST THE BEGINNING.

One group includes a brilliant virologist; for the other, an immune soldier proves invaluable. Battling infected and marauding raiders at every turn, the teams soon uncover the devious plans of Sawyer, an agent of the Chairman of the Reunited States of America, who believes that Dr. Anna Demilio already has the cure, and he will stop at nothing to find her. Now, with the salvation of the world and their own souls on the line, how far will the survivors go to emerge victorious?” 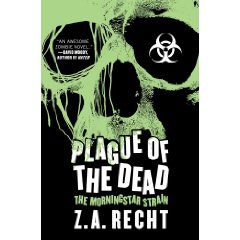 Permuted Press has announced that Z.A.Recht, author of Plague of the Dead and Thunder and Ashes, has died.

This is shocking, horrible news. I never had the pleasure of meeting Z in person, but I talked to him by email as recently as last month. He seemed like a genuinely good guy – polite, funny and enthusiastic about all things zombie. Plague of the Dead has been picked up as part of a deal between Permuted and Pocket Books and is due to be re-released later this month. Such a shame that Z won’t be here to see it.

My sincere condolences go out to his family and friends at this terrible time.

‘ and ‘Plague of the Dead

This is absolutely great news. Jacob Kier (owner of Permuted) and I started out around the same time and we first crossed paths when my story ‘Home’ appeared in the first Permuted title – ‘The Undead

‘. For several years we ran reciprocal adverts for each other – I carried PP ads in my ‘Infected Books’, Jacob carried adverts for the ‘Autumn‘ books in PP titles.

I’m absolutely thrilled for him and all the authors involved because they’ve shown yet again how independent publishing can and does work. It’s fast becoming a viable alternative way to market for a lot of authors. In fact, my US publisher Thomas Dunne Books is now taking pre-orders for ‘John Dies at the End

‘ – another book which was initially self-published on-line before being released by Permuted. Movie rights to the book have been sold to Don Coscarelli, director of ‘Bubba Ho-Tep

Congratulations again to Jacob and all the Permuted authors involved in this deal. I’m stoked for all of them!