A final post for the week to let you know what’s happening with TRUST – my Infected Books reissue/experiment.

The book is primed and ready to go. Unfortunately, because of recent time constraints, the limited edition hardcover won’t be available straightaway. More information about that in a moment. First, here’s a very brief recap of what the book’s about… 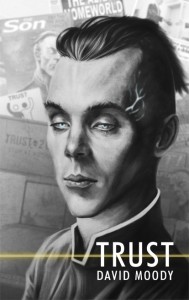 The most important event in human history takes place in the middle of nowhere. Perspectives are altered. Perceptions are changed. Nothing will ever be the same again. Is this a moment of deliverance for the human race, or the beginning of its end? Tom Winter thinks he knows, but if he’s right, then seven billion other people are wrong.

Early on Monday, the book’s website – www.trustdavidmoody.com – will be refreshed with the opening chapter. Subsequent chapters will appear on the site every Monday and Friday from now through ’till December when the whole novel will have been serialised.

The paperback edition is available to order now from all the usual online retailers such as Amazon, The Book Depository, etc. On Monday you’ll also be able to order signed copies direct from www.infectedbooks.co.uk.

Also on Monday, the novel will be available worldwide on Kindle for $2.99 or similar depending on your local currency. Other eBook formats will follow in due course.

Finally, about that limited edition hardcover… Pre-orders will open in early August, and this edition will be strictly limited to 500 signed and numbered copies priced at £25.00 plus postage. The hardcover will also contain exclusive content – an essay about the history of the book, it’s influences and more.

I’m really excited for this release. It’s felt unexpectedly liberating to be back behind the wheel of Infected Books again. I have a few more mainstream projects I’m working on right now, but if TRUST is a success, then STRAIGHT TO YOU will get the same treatment in late 2012/early 2013.

See you on Monday!