I’ve been a guest at a couple of cracking events over the last few weeks. Here’s a brief recap.

On Friday 22nd June, I appeared alongside Joseph D’Lacey, Simon Bestwick and host Jasper Bark in the Writers’ Room at the University of Warwick to officially launch the This is Horror chapbook series. As you know, I was honoured to be asked to write the first chapbook, and Joe & Me has been exceptionally well received. We’ve had very positive reviews from Rue Morgue, Dread Central, Snakebite Horror, the British Fantasy Society, Shadowlocked, and more. The evening was a lot of fun, with readings from the three of us, followed by a Q&A session. The picture below was lifted without permission from fellow author Adam Millard (thanks Adam!), and shows (from left to right), myself (in my Fix the Chapel shirt, please note!), Jasper, Simon and Joseph. 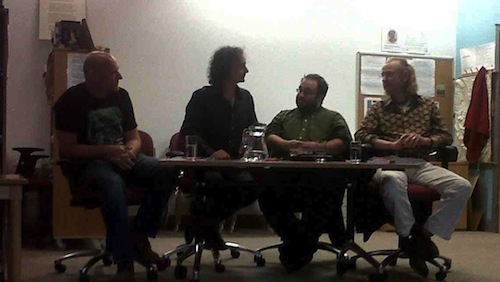 To get hold of a copy of Joe & Me (and you’ll need to be quick as they’re very limited and disappearing fast…) visit www.thisishorror.co.uk.

On Sunday 8th July I was at the Shock and Gore horror festival at the Electric Cinema in Birmingham – a hometown event for once! After a reading and Q&A alongside Sam Stone and John L Probert – again hosted by the inimitable Jasper Bark – I had the privilege of introducing a screening of Tod Browning’s 1932 classic, FREAKS.

Have you seen FREAKS? If not, can I recommend that you do. For a film that’s eighty years old and barely sixty-five minutes long, it still packs a hell of a punch.

Thanks to everyone involved in these events – Michael Wilson and the This is Horror team; David Baldwin and all at the Electric; Simon, Joseph, Sam, John and, of course, Jasper; and everyone who came along to watch/listen/contribute. 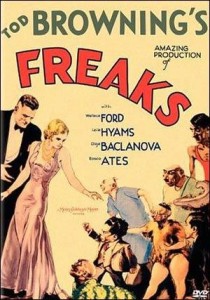 I’m really excited to confirm that I’ll be at the SHOCK AND GORE horror festival at the Electric Cinema in Birmingham next month. Running from 6th to 8th July, a host of great films will be screened from classics such as VIDEODROME and MARTIN, through to new movies such as RED LIGHTS and DETENTION. I’ll be taking part in a literary session at 6pm on Sunday with Conrad Williams, Sam Stone and Jasper Bark, after which I have the privilege of introducing a screening of Tod Browning’s still powerful 1932 film, FREAKS.

For more information, click here to visit the festival site.