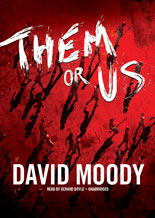 I’m thrilled to announce that the audiobook version of THEM OR US is out today. Released by Blackstone Audio, and available in a variety of formats, it’s again narrated by Gerard Doyle who did such a great job with his readings of HATER and DOG BLOOD.

The book’s available from AMAZON and all the usual outlets, and can be downloaded from AUDIBLE and ITUNES.

Special thanks to Shawn who campaigned for this release. I don’t know if they bowed to your pressure or whether the book was in the pipeline anyway, but thanks all the same!

You’ve heard me talking about Lowestoft a lot recently. Ryan Fleming, one of Moody’s Survivors, visited the town after reading THEM OR US and, armed with the book, a local, and a tourist’s guide of the area (written by me), he took photographs of some key locations. The very talented David Naughton-Shires (who you’ve met before if you’ve been a regular visitor here, and who you’ll be meeting again very shortly) then worked a little of his post-apocalyptic magic on the pics. I used them to illustrate my presentation last week, and I thought it would be good to share some of them here. Welcome to Lowestoft! 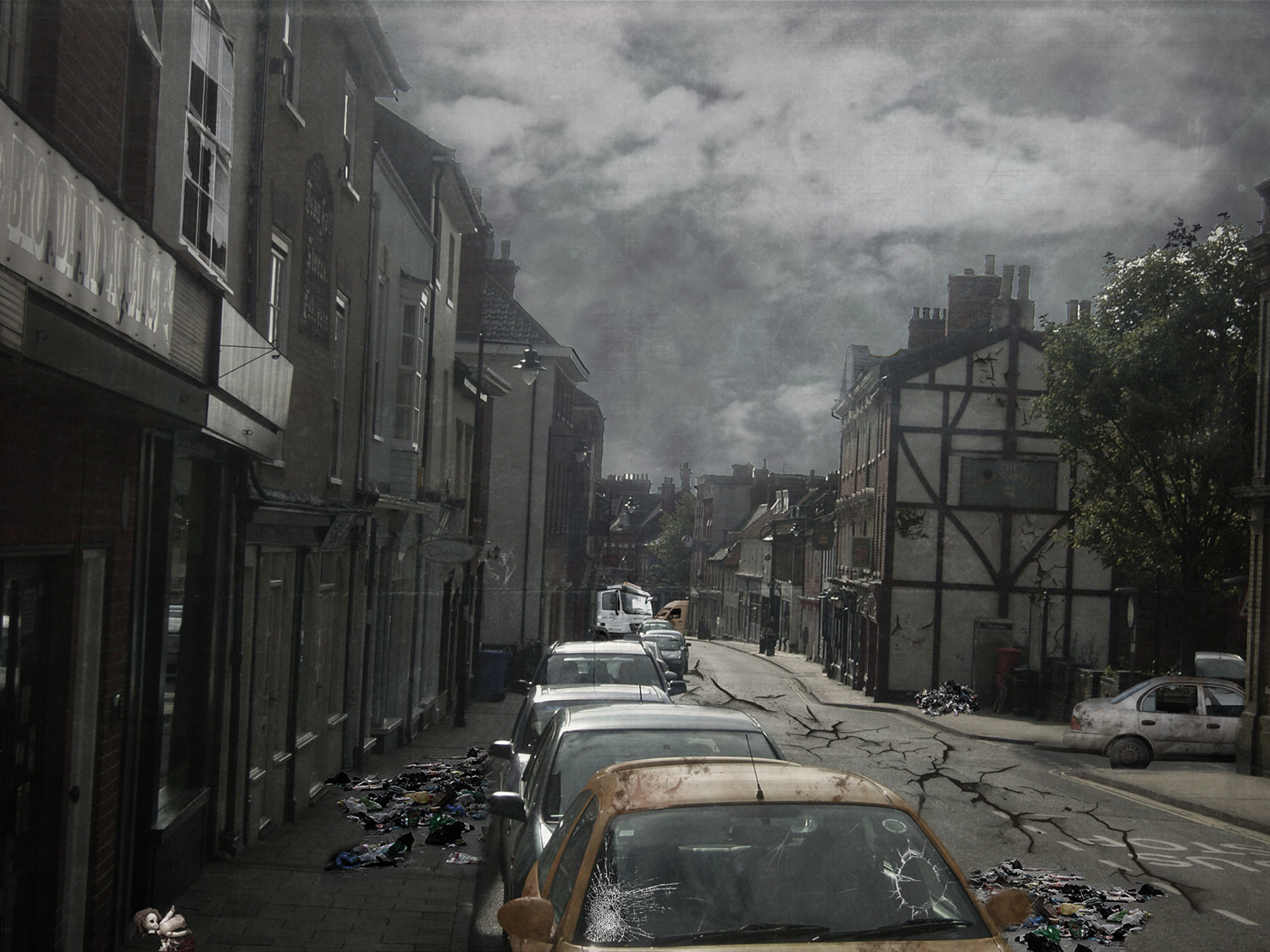 Okay, maybe that headline’s a little unfair on Lowestoft: it’s not really the end of the world, but it is the east coast town where much of THEM OR US takes place, and it’s where I was last Thursday evening to mark the UK release of the final book in the HATER trilogy.

I’m going to post again later this week and explain more about why and how Lowestoft was the perfect setting for the book, but for now I just wanted to report back on the launch event and thank a few folks for their help in making it a success.

We kicked off with a well-supported Waterstone’s signing, before moving on to Lowestoft Library (a location referenced in THEM OR US) for more signing, followed by an illustrated talk and a question and answer session. Thanks are due to David Naughton-Shires for producing some great post-apocalyptic artwork (an example of which is below, you’ll see more in my next post), and to Iain McKinnon and the cast and crew of Projekt for the video clips I used. You’ll probably not have heard of Projekt before… in early 2010 we produced a series of HATER viral videos which were designed to tell the story of the first book, and set the scene for DOG BLOOD. Unfortunately rights issues prevented us from releasing the footage (and the position’s still the same), but it was great to finally be able to show a few brief snippets. 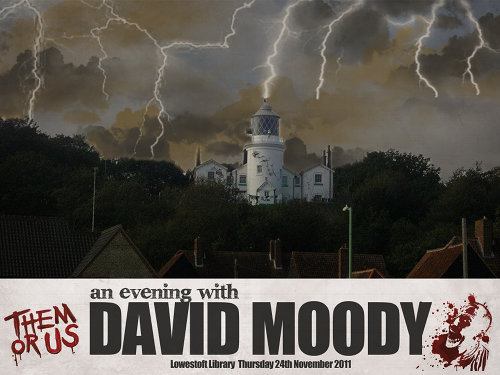 At this point I need to mention the audience – many of whom had travelled considerable distances to be there (but let’s be honest, you have to travel a considerable distance from anywhere to get to Lowestoft – that’s why it made such a perfect location for THEM OR US!). There were plenty of Survivors there, and huge thanks to them for their ongoing, yet vaguely stalker-ish support. More about that in another post which is coming shortly…

Thanks also to Jane Rothon and the staff of the library for being so accommodating, to Ivan Bunn for the technical support, to Jo and the staff at Waterstone’s for actively supporting the event with real enthusiasm, to the staff at the Chinese restaurant most of us ended up in for the most bizarre dining experience I can remember in a long time, and finally to Emma Bunn for being the glue which held it all together. Emma – if you hadn’t spotted my wife and I out drinking in a Lowestoft pub last summer, the event would never have happened! 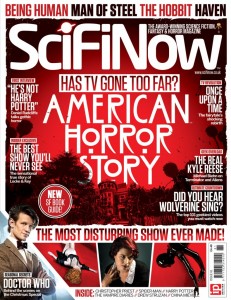 The latest issue of SCIFINOW MAGAZINE (issue 61, cover pictured opposite) is a cracker. As well as all the usual genre features, reviews and interviews, there’s also a storming review of THEM OR US (a tour de force of a story that skirts around the worst excesses and cliche of the genre to offer up something as distinctive as a fresh bite-mark), and my personal guide to surviving the zombie apocalypse. It’s a great double-page feature that looks at the pros and cons of some of the places you might find yourself when the dead rise (and, as we all know, they inevitably will!).

I had a huge amount of fun writing the piece, although it made me realise that I’ve spent far too much time thinking about the living dead over the years! Why not pick up a copy and see if you agree with my tactics?

Thanks to everyone who entered the THEM OR US giveaway. The winners have now been drawn and I’m pleased to announce they are as follows:

Scott Lyall wins the complete signed HATER trilogy, a HATER T-shirt and mousemat, and a piece of the original cover art.

Signed copies of THEM OR US go to Rod Nojek, David Naughton-Shires, and Rebecca Besser.

Congratulations, and thanks again to all who entered. 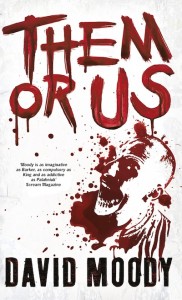 The UK edition of THEM OR US – the final book in the HATER trilogy – is out now from Gollancz. Thanks to everyone who has already picked it up. I’m thrilled with the reception you’ve given it so far.

Next Thursday evening I’ll be in Lowestoft (the town where the book is set), signing at Waterstone’s then moving on to talk about the HATER series and my work in general at Lowestoft library (which also gets a mention in THEM OR US). A few tickets are still available, click here for information.

And in case you missed my last post, I have some copies of the UK edition of the book available for sale through www.infectedbooks.co.uk. All copies will be signed, but please get in fast if you want one – my stocks are rapidly depleting!

Finally, I’ve just extended the deadline for the THEM OR US competition. You’ve now got until midday tomorrow to enter. Click here for the details.

As is usual at this time of the year, you can order signed copies of my books from www.infectedbooks.co.uk. Stocks are limited, so get in quick if you want them in time for Christmas.

Both the UK hardcover and paperback editions of THEM OR US have just been added to the store.

By the way, if you’re reading this on Facebook, you can also buy signed books direct from the Facebook page itself. Click the ‘Shop Now’ option in the left hand menu for more information.

Time for a quick competition I think! Up for grabs is the following:

One first prize consisting of:

And three runners-up prizes of signed copies of THEM OR US (you choose the format – US or UK hardcover or UK paperback).
To stand a chance of winning, just do one or more of the following before midday (UK time) on (you’ll get an entry for each you do). UPDATE – DEADLINE EXTENDED TO MIDDAY FRIDAY 18th.

And if you’re feeling really brave, you could take a leaf out of the Moody’s Survivors book. Remember this photo of me from SFX magazine? Recreate the pose like the fine people at the bottom of this post, and you’ll get an extra ten entries into the draw if you use it as your Facebook/Twitter profile picture between now and the 17th.

Good luck! Remember – as always – the competition is open worldwide, and my decision is final. Only one tweet and one Facebook post per person please. The winners will be chosen at random and announced by Saturday 19th November. The human race has been torn apart, and now the war is reaching its end. There is only one question: will it be THEM OR US? The concluding book in the HATER trilogy is released in the US today through Thomas Dunne Books.

BloodyDisgusting.com said: “Like the two previous entries, THEM OR US flaunts a blistering pace and riveting dialogue… If HATER is Anarchy and DOG BLOOD is War, THEM OR US is a straight-up Holocaust, a hugely satisfying finale that really hits the post-apocalyptic sweet spot.”

Fangoria said: “As much an allegory for today’s frightening climate of terrorism, controversial wars and us-versus-them mentality as it is a horror/”zombie” yarn, the HATER trilogy has worked best when it is most human, and Danny’s struggle to remain that is the heart of this series. By the time all hell breaks loose in THEM OR US‘s finale, it’s easy to see parallels to our world’s current crises and conflicts.” 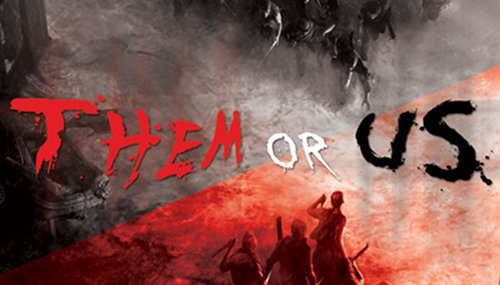 The book is out in the UK on 17 November from Gollancz. In the meantime, check back here tomorrow for an exclusive giveaway. And UK readers, don’t forget to book your tickets for the unique launch event in Lowestoft on November 24th.