– the first book in the second HATER

trilogy – fast approaching, I thought it would be interesting to start showing you how the two series are connected. They both tell different stories, but there are shared events and locations and… and I’m not going to tell you much more just yet.

With apologies for my limited graphics skills, here’s a handy timeline: In case you’re new around here or need to catch up in readiness for the new books, HATER

and THEM OR US

are available now. EVERYTHING AND NOTHING is a free ebook download which you can get here, and ONE OF US WILL BE DEAD BY MORNING

(with a healthy dash of BLADE RUNNER

Those of you who’ve been following my work for a while will know that the last few years have not gone to plan. Various personal and family issues have repeatedly derailed my writing, and my family and I are right in the middle of another wave right now which is substantially affecting my ability to write. By the end of this year, however, we should be back to business as usual.

But it’s not all doom and gloom around here… a substantial amount of work is still getting done (just not as much as I’d like). THE OTHER HALF (HATER #5) is coming along nicely and will be delivered to my editor shortly. After that I’ll be writing AXXXXX: XXXXXX – a top secret novel I haven’t told anyone about – which should take me through to the end of 2017. In the new year I’ll be diving straight into THE LAST SUMMER (HATER #6), and then I’ll be cracking on with THE SPACES BETWEEN.

At this point I should add that all those folks who won the competition I ran back in 2014 to appear as named characters in the books will all still appear as planned. Apologies, folks, for the unavoidable delay.

Even though I’ve hardly written a word of the series, I’ve been doing plenty of planning. Part of the issue I’ve had is that it’s a HUGE story, and the overall length has fluctuated wildly during the planning process. There’s a lot of world-building to be done, but I’ve taken the decision to separate a lot of that out from the main narrative. So what began as a five book series has now ballooned to nine books which will, in effect, be two separate series which will conclude with a single final novel. The extra books will be THE SHADOWS BETWEEN – the future histories of key events which will define the world of THE SPACES BETWEEN. My plan is that the books will be released in pairs – one from each thread of the story at a time.

You’ve got to trust me on this – it’s all going to be worth the wait. I’m just sorry it’s taking such a long time! 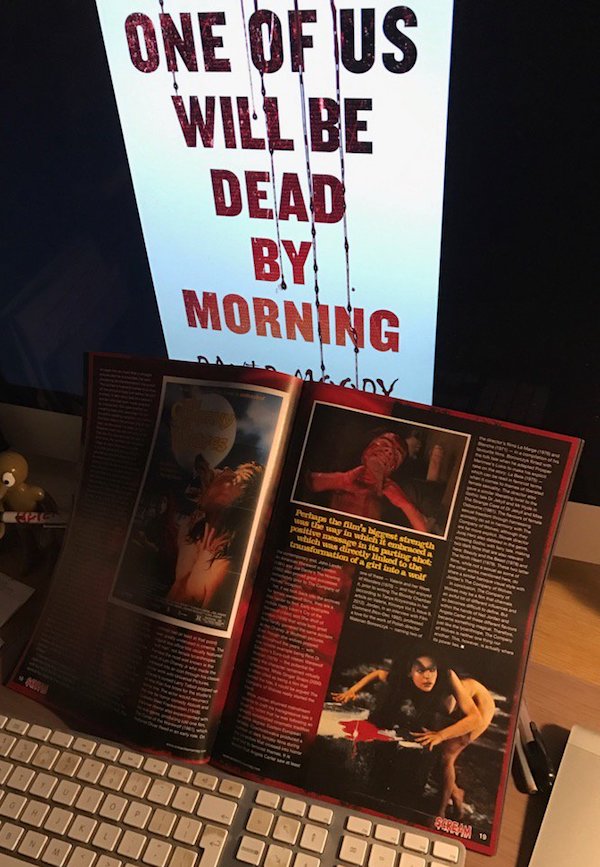 Over the weekend I shared this image to help promote the new issue of SCREAM MAGAZINE. It’s generated a fair few comments on Facebook and Twitter about the new HATER

books, so I wanted to give you a very quick update/ explanation.

There are three new books coming in the HATER

series: ONE OF US WILL BE DEAD BY MORNING

(out later this year), ALL ROADS END HERE (which I’m currently writing), and CHOKEHOLD.

This is NOT a continuation of Danny McCoyne’s story from the first three books, nor is it a reboot of the series (how I hate that expression). It’s actually a combination of both. The first book details the outbreak of the HATER

epidemic (for want of a better word) from a different point of view to the original novel. The second book takes place alongside the events of DOG BLOOD

, so you’ll encounter a few familiar faces and places but, again, they’ll be shown in a different light. Chronologically, book three takes place between DOG BLOOD

and THEM OR US

and fills in a few blanks I deliberately left vague first time around. Our guide through the apocalypse this time around is a gentleman by the name of Matthew Dunne who is a… no, I’m not going to tell you any more just yet.

Though ONE OF US WILL BE DEAD BY MORNING

currently has a release date of 15 August pencilled in, this may change. I’ll let you know more when I do. In the meantime, here’s the back cover blurb…

Fifteen people are trapped on Skek, a barren island in the middle of the North Sea somewhere between the coasts of the UK and Denmark. Over the years this place has served many purposes – a fishing settlement, a military outpost, a scientific base – but one by one its inhabitants have abandoned its inhospitable shores. Today it’s home to Hazleton Adventure Experiences, an extreme sports company specialising in corporate team building events.

Life there is fragile and tough. One slip is all it takes. A momentary lapse leads to a tragic accident, but when the body count quickly starts to rise, questions are inevitably asked. Are the deaths coincidental, or something else entirely? Those people you thought you knew well, can you really trust them? Are you standing next to a killer, and will you be their next victim?

A horrific discovery changes everything for everyone. There’s no way home now, and a trickle of rumours becomes a tsunami of fear. Is this really the beginning of the end of everything, or a situation constructed by the mass hysteria of a handful of desperate and terrified people?

The lower the population, the higher the stakes.

Kill the rest of them, before one of them kills you.

I thought it was about time I made an appearance here! It’s been a while, I know. As many of you know, I went back to non-writing work a while ago to save my sanity (seriously, it was doing me no good at all sitting at home on my own all day every day, writing about the end of the world), and that, combined with sorting out my dad’s affairs and working on a surprisingly large number of different writing projects, has led to me neglecting this site. I’m hoping to remedy that in the very near future.

I wanted to take this opportunity to update you on a couple of projects. Firstly, I’m really pleased to announce that Thomas Dunne Books will be publishing the second HATER

trilogy, and I’m thrilled to be working with the team there again. I’ve been working hard on the first novel – ONE OF US WILL BE DEAD BY MORNING – and I look forward to bringing you more news in the coming months. OOUWBDBM is a very different kind of HATER

novel which sets up a new cast for the other two books ( ALL ROADS END HERE and CHOKEHOLD) which will weave in and around the events of the original trilogy and bring a new perspective to the overall story. Can’t wait to tell you more.

are no doubt cursing me for my lack of speed, but I’m also busy writing THE FRONT: RED DEVILS – a continuation of the World War II with zombies story Tim so excellently kicked off with SCREAMING EAGLES

All this means THE SPACES BETWEEN books have been on the back burner (again), but never fear – they will be written and you will get to read them. And all those folks who won the competition to appear as characters in the novels will still see their names in print. Unfortunately I can’t give you a timescale (and if I did set myself a deadline, I’d inevitably miss it!).

And that’s not all… YEAR OF THE ZOMBIE continues apace. June’s book will be launched next week, and it’s another cracker. Genuinely unsettling. When Wayne and I were planning this series, we wanted to publish a really diverse range of stories and, six months in, that objective has already been achieved. From Iraq to Wales, from psychological horror to blood and guts, from high octane thriller to slapstick comedy, from hunting zombies to dodging sheep, our authors have really delivered. Check out the releases here. And yes, you might see something from me joining the line-up in the not too distant future…

A bunch of short stories, a host of other novels (KAI, 17 DAYS, WAS SHE NEVER THERE?), the HATER movie… there’s a huge amount of stuff to come from me soon. Thanks for your patience. I’m off for a few days’ break with the family now. Plenty more news when I return.

For me, the original HATER series was nicely self-contained. Although the whole world had gone crazy and imploded, the books were first and foremost Danny McCoyne’s story. I resisted even thinking about writing other books for a long time because I’d told all of Danny’s story and without a damn good reason to go back to the world of HATER, I thought any additional novels would just be a cynical cash in.

I introduced you to Ed last week. He’s the producer of the new HATER movie, and over the last few months he and I have talked extensively about how, if the first movie is successful, we’d want the rest of Danny’s story to be adapted for screen. The second HATER trilogy is a direct result of those conversations.

Details are pretty sparse at the moment, but click the link and I’ll tell you what I know.