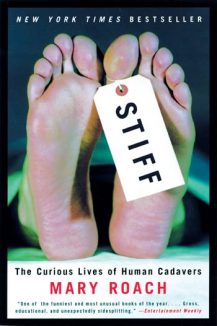 I’ve only ever seen two dead bodies – those of my father-in-law and my father. Regardless of the emotional attachment, it’s always a sobering experience. I’m not a religious man (in fact, I’m as far from religious as you can get – anti-religion, if you like), so I don’t believe any part of a person survives past the point of death. My belief is that once you die, you’re done. You immediately stop being you and become, well… nothing.

But what about your shell? What about the husk you leave behind? What happens to that?

It’s a sensitive and often taboo subject, but it’s one journalist and writer Mary Roach

tackles head on in 2003 book, STIFF: THE CURIOUS LIVES OF HUMAN CADAVERS

. Written in a hilarious style which feels at once both keenly respectful and also cheeky and impertinent, Roach looks at a large number of ways the human body is used after death. Let me give you some examples of the subjects of her chapters:

…and it goes on. It sounds grotesque, I know, and Roach often writes with an unflinching eye, but she achieves something remarkable with this book: in talking about death and decay, she somehow leaves you feeling happier about life and your inevitable end. I originally picked this book up for research purposes (you think I make this stuff up? I’ll have you know the decay of my zombies is medically researched!), but by the end of a couple of chapters I was just along for the ride.

My dad died just under a year ago, and I was with him at the end. I’d had STIFF

part-read on my shelf for a number of years, but losing Dad gave me a surprising incentive to pick the book up again and finish it. And I’m glad I did. It helped put things in perspective. Highly recommended.