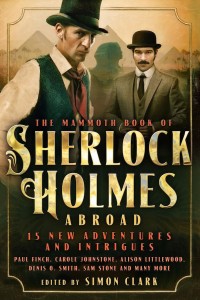 The title of this post says it all really. This anthology, edited by the great Simon Clark, hits the shelves in the US tomorrow. Published by Running Press, it’s available from all the usual outlets including Amazon

, IndieBound and Barnes and Noble. Publishers Weekly gave the collection an excellent starred review which you can read below. Click here to remind yourself of the contents and contributors.

Clark (The Night of the Triffids) has done a superior job in selecting the 15 original pastiches for this anthology, all of which remove Holmes from his Baker Street haunts to exercise his deduction skills in less familiar terrain. The standout, Paul Finch’s “The Monster of Hell’s Gate,” sends Holmes and Watson to East Africa, where the legendary Nandi bear, a creature familiar to cryptozoologists, has been decimating native workers on a new rail line. Finch blends suspense, atmosphere, and fair-play cluing so skillfully that many would welcome a longer Holmes story from his imagination. The always-reliable Denis O. Smith takes the duo to Russia in “The Adventure of the Colonel’s Daughter,” to clear a man caught literally red-handed at the scene of a murder. Clark’s own “The Climbing Man” confronts Holmes with an impossible crime in Mesopotamia. The consistent excellence makes this a better choice for Sherlockians than such similar volumes as “Sherlock Holmes in America” and “Sherlock Holmes: The American Years.” 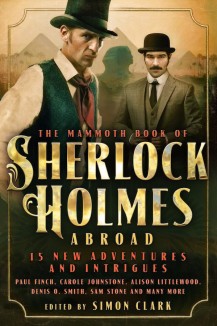 Today sees the release of THE MAMMOTH BOOK OF SHERLOCK HOLMES ABROAD, which contains my short story A CONCURRENCE OF COINCIDENCES. From the back cover:

As I mentioned previously, writing this story was a completely new experience for me, and it was one I enjoyed immensely. I’m really pleased with how my short turned out, and I hope you enjoy it.

The book is published by Constable and Robinson in the UK, and will hit the shelves in the US on July 15 from Running Press. Pick up your copy from: AMAZON.COM / AMAZON.CO.UK / The Book Depository / Waterstones / Barnes & Noble / Indiebound. 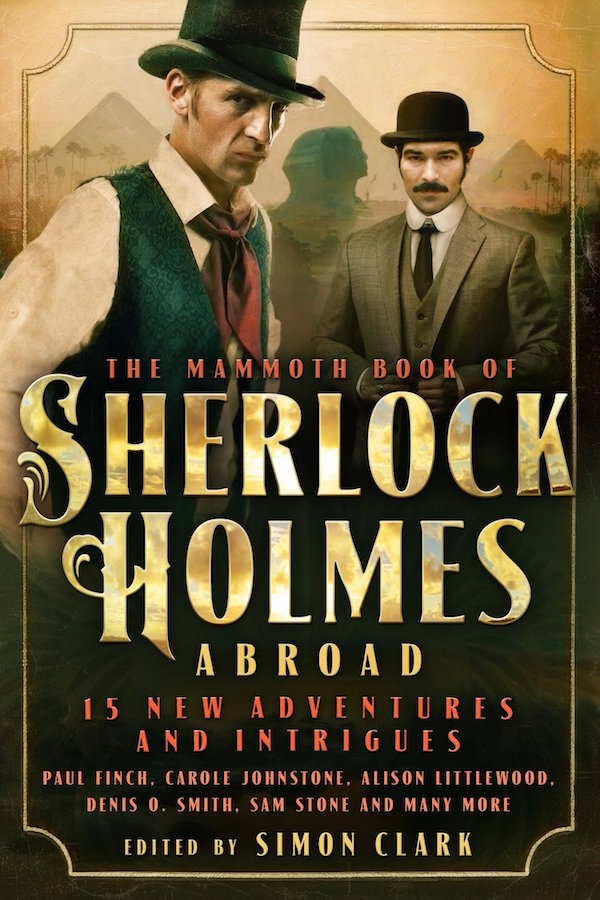 I mentioned last year that I’d been trying to push myself out of my comfort zone… with this commission I couldn’t have been much further from the kind of stories I usually write: different genre, different era, different setting, different pace. Daunting, yet very rewarding.

I’m very pleased to announce that my Greenland-set story A CONCURRENCE OF COINCIDENCES will appear in THE MAMMOTH BOOK OF SHERLOCK HOLMES ABROAD, published by Constable & Robinson in the UK on 2 April, and by Running Press in the US on 14 July.

In this wonderful anthology of ‘hitherto lost’ tales, the Great Detective travels to the far ends of the earth in pursuit of truth and justice.

The book is already available to pre-order. Here are a few handy links: AMAZON.COM / AMAZON.CO.UK / The Book Depository / Waterstones / Barnes & Noble / Indiebound. ebook links and a full list of contents to follow shortly. 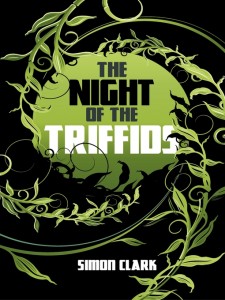 Well that was good. Actually, that was more than good. ivexterm precio farmacia benavides That was a bloody brilliant weekend. pour on ivermectin alternative 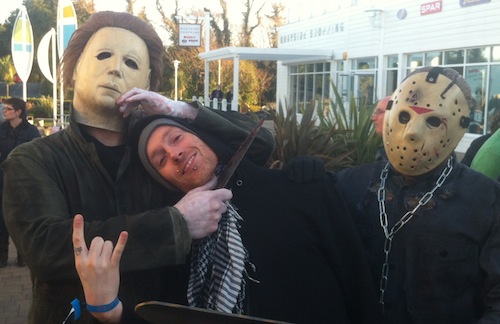 Wayne Simmons and I often spend a lot of time chatting about what makes an event a success. It’s different for everyone, I guess, but for me it’s all about engaging with people. prospect ivermectina It’s good to meet other writers, publishers and media folks, but it’s absolutely incredible when you get the chance to meet with people who’ve either read your books or want to. At this years Sci-Fi Weekender I got to hang out with 3,500 fellow geeks, and I loved it.

Highlights? Talking horror and writing with a constant stream of very cool people. Selling loads of books. Meeting other authors including Hugh Howey (Wool) – an incredibly nice guy – and Sean Jeffery (Deadfall) at long last. Catching up with Sean Page (Ministry of Zombies head honcho). Sitting on panels with a host of folks including Hugh, Wayne, Peter Brett, Simon Clarke, Sam Stone, Steve Lockley and many others (even though we couldn’t hear the audience or each other most the time). Experiencing the majesty of MANBORG with Wayne, JD Gillam, David VG Davis, Robin and Stephen Pierce, Gary Main and Roy Young… The list goes on. Here are a few photos: 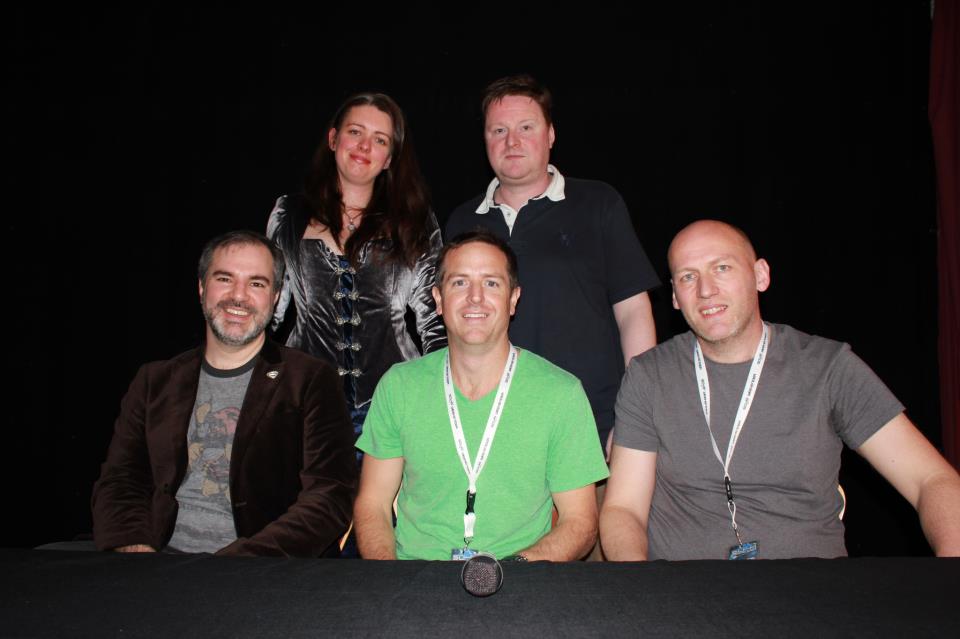 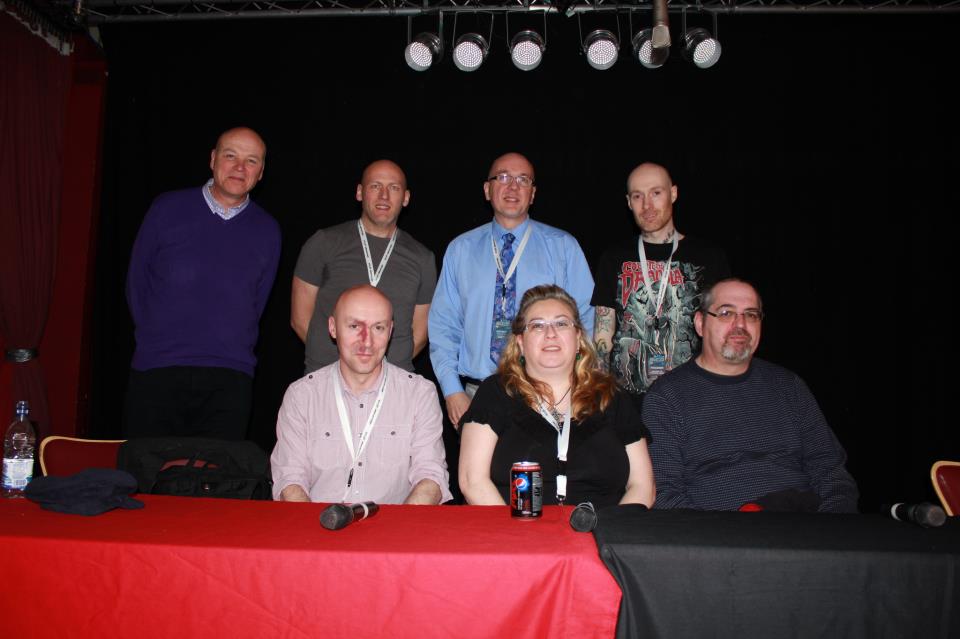 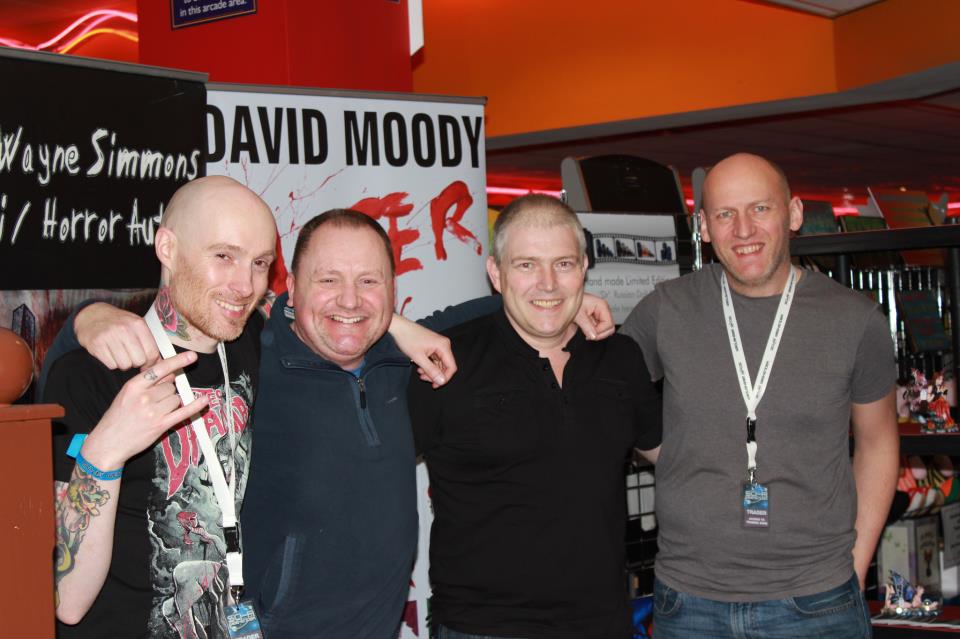 Wayne, Gary, Roy and me 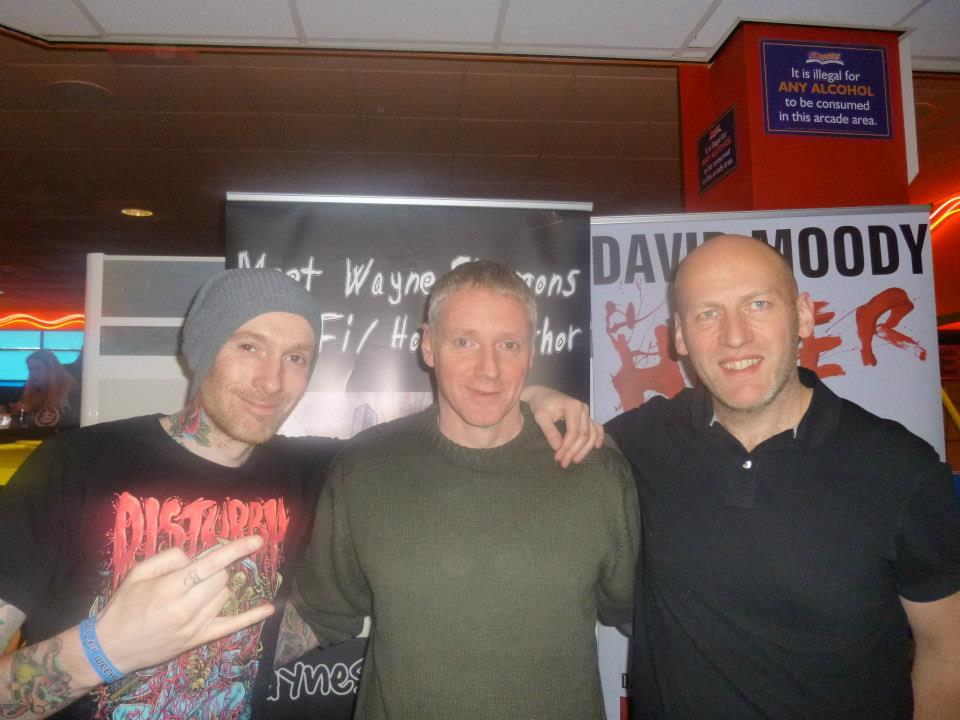 Wayne, Shaun Jeffrey and me

Huge thanks to everyone involved in organising the Weekender, and to all those who came along to the event. And if you’ve not come across the mighty MANBORG yet, watch this…

A quick post to comment on one excellent event and for some last minute publicity for another. Last weekend I was at alt.fiction – a great writing event held in Leicester. On Saturday I took part in a panel discussing adaptations of books, films, comics, games etc. into different formats, and on Sunday I was there for another Mammoth Book of Body Horror panel along with the book’s editors Paul Kane and Marie O’Regan, and fellow contributors Simon Clark and Conrad Williams. 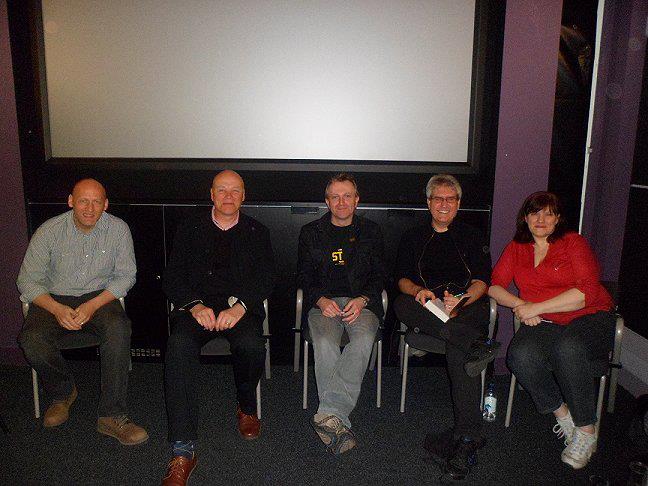 It was great to meet Graham Joyce too, and to be there for the premier of Black Dust – an excellent short movie based on one of his stories. Thanks to everyone who supported the weekend and to the organisers for having me.

I know I’m leaving this next bit late, but don’t forget that I’ll be at Waterstones in Cardiff tomorrow, signing with Wayne Simmons. Wayne’s launching his new novel DOLL PARTS – the sequel to DROP DEAD GORGEOUS. Please come along if you’re in the area. We’ll be there from 12:30pm onwards.

I hope not to leave it another two weeks before posting again. With a little luck I’ll be back in a few days to let you know what I’m working on now that the HATER and AUTUMN books are done and dusted. There’s some good stuff coming…

Last Saturday I was in Chesterfield with editors Paul Kane and Marie O’Regan and fellow contributor Simon Clark for an event to mark the launch of the extremely well received MAMMOTH BOOK OF BODY HORROR anthology (see this 10/10 review here, and there have been plenty of other positive write-ups). The event was a lot of fun with both Simon and I reading from our stories before taking part in a Q&A session with the editors. Thanks to Paul and Marie for inviting me along, and to Trisha Hill for hosting the event. 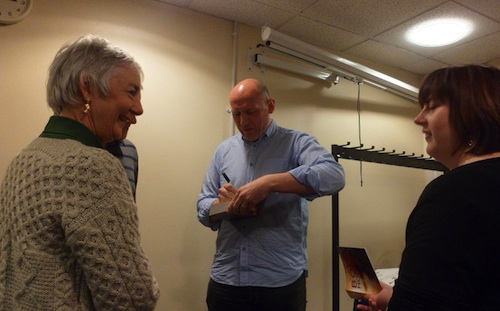 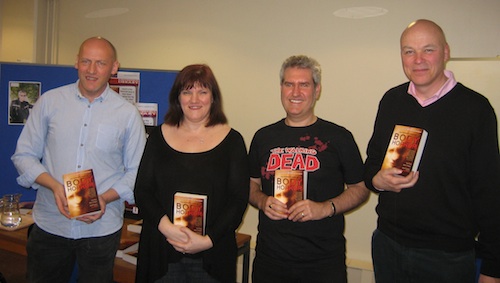 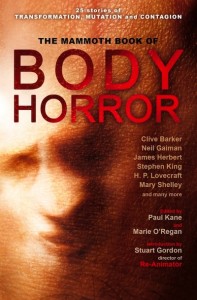 The Mammoth Book of Body Horror – which features my new short story, Almost Forever – is out today (the US edition follows in June). If you read my earlier post, you’ll know there are plenty of reasons for picking this one up… an introduction from Stuart Gordon (director of Re-Animator), the original shorts which inspired The Fly and The Thing, additional stories from Neil Gaiman, Richard Matheson and many more… Starburst Magazine certainly liked the book: click here to read their review (which begins with the headline ‘It really doesn’t get any better than this.‘)

And don’t forget, on Saturday 10 March I’ll be at Chesterfield Library to launch the book along with Simon Clark and the book’s editors, Paul Kane and Marie O’Regan. The event begins at 2pm. Click here to request your free tickets from the library.

In the meantime, you can order Body Horror from Amazon, Waterstone’s and the Book Depository.

I’m very pleased to announce my involvement in this new anthology, out March 1st in the UK from Constable & Robinson and June in the US through Running Press. The book’s been put together by Paul Kane and Marie O’Regan, and it looks like being an absolute cracker. Just check out the stunning table of contents at the end of this post. I feel wholly inadequate being listed alongside King, Herbert, Matheson and Poe, as well as the original short stories that inspired two of my favourite films of all time (THE FLY and THE THING).

You can order it now from AMAZON.CO.UK, WATERSTONES, the BOOK DEPOSITORY and all the other usual sites.

I’ll also be taking part in a couple of events to mark the release of the book. On Saturday 10th March I’ll be at Chesterfield Library for a reading followed by a Q&A with Simon Clark and the editors. On 14th and 15th April I’ll be at alt.fiction at Phoenix in Leicester. More details about that event shortly.

TRANSFORMATION by Mary Shelley; THE TELL-TALE HEART by Edgar Allan Poe; HERBERT WEST: RE-ANIMATOR by H.P. Lovecraft; WHO GOES THERE?  John W. Campbell; THE FLY by George Langelaan; TIS THE SEASON TO BE JELLY by Richard Matheson; SURVIVOR TYPE by Stephen King; THE BODY POLITIC by Clive Barker; THE CHANEY LEGACY by Robert Bloch; THE OTHER SIDE by Ramsey Campbell; FRUITING BODIES by Brian Lumley; FREAKTENT by Nancy A. Collins; REGION OF THE FLESH by Richard Christian Matheson; WALKING WOUNDED by Michael Marshall Smith; CHANGES by Neil Gaiman; OTHERS by James Herbert; THE LOOK by Christopher Fowler; RESIDUE by Alice Henderson; DOG DAYS by Graham Masterton; BLACK BOX by Gemma Files; THE SOARING DEAD by Simon Clark; POLYP by Barbie Wilde; ALMOST FOREVER by David Moody; BUTTERFLY by Axelle Carolyn; STICKY EYE by Conrad Williams.