From the festival organisers: Zombies and Vampires are so popular and it’s about time the UK held the biggest and best undead weekend of fun and gore! SCREAM has officially teamed up with Active Promotions Europe to stage the very first 80s ALTERNATIVE WEEKEND this September 14th-16th 2012 in Northampton, UK.

There are a growing number of horror events springing up around the UK, and here’s another one for the calendar. On October 21st and 22nd, at Billing Aquadome in Northampton, the inaugural UK ZOMBIE FEST will take place. The event name just sells itself, doesn’t it?! I’m definitely planning to be there.

In order to make the event viable, they needed to hit 2000 Likes on their Facebook event page: www.facebook.com/UkZombieFest. When I last was able to check, they’d only had a few hundred, but it seems they’ve already smashed 2000 now. Please head on over and add your ‘like’ to the cause. 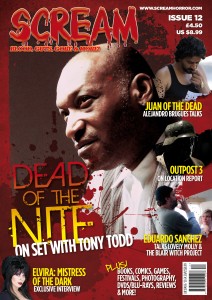 By the way, I was told about the festival by the good folks behind the magnificent SCREAM MAGAZINE and, as is customary, I’ll now spend a few seconds promoting their latest issue which includes…

An exclusive interview with Tony Todd on the set of the upcoming “Dead of the Nite”, an exclusive interview with Mexican director Alejandro Brugues who tells us all about “Juan Of The Dead” (Cuba’s first Zombie movie!), There’s also an exclusive on-location report from up-coming nazi-zombie-horror “OUTPOST 3?, Elvira: Mistress of the Dark sits down with us and give us an exclusive Career Interview, Director Eduardo Sanchez talks “The Blair Witch Project” & his latest horror “Lovely Molly”, Steve Niles Talks “30 Days of Night” and Vampire Comics: PLUS: Books, Games, Comics, Festival Reports, Photography, DVD/Blu-rays, News, Reviews, Previews, Competitions & much more!

The next time I’ll get to a computer (hopefully tomorrow), I’ll report back on a couple of events I was involved with recently, and I’ll also tell you about another debut horror festival taking place this November in a place very close to my heart…