Those of you who caught the AUTUMN books first time around will probably remember my ‘Spread the Infection’ tagline. I used it for years, and I’m sure it was responsible to some degree for the book’s journey from free pdf to half a million downloads, a movie

They’ve been unavailable for far too long, but the re-release of the AUTUMN series is close at hand. The first book is out in late October (US and UK – click the covers for information, Spain and Germany – you already have it!), and books two, three and four will be following in quick succession throughout 2011.

I’ll be able to give you more details about the release very soon. In the meantime, I wanted to ask a couple of favours…

First off, I want your memories of AUTUMN first time around for some articles I’m putting together. I’ve had emails from people who were freaked out reading the free download while working alone on the night shift, others who printed the pdf off and read it in class… please let me know how you found out about the series. Also, if you were involved in the book in any way and we haven’t spoken for a while (I’ve particularly been trying to get hold of Dave Joseph who created the face on the original cover if anyone can help), then please get in touch.

Secondly, I’d really appreciate it if you’d help me ‘Spread the Infection’ again. Follow me on Facebook, Friend Feed or Twitter, sign up for the newsletter (see sidebar), and invite your friends to do the same…

There’s going to be a lot going on with the accelerated re-release of the novels – including plenty of free fiction and much more – and there will be many opportunities to get involved so I’d like as many people as possible to know!

A very limited number of signed copies of the UK edition of DOG BLOOD (both hardback and paperback versions) have just been made available to buy via www.infectedbooks.co.uk.

You may remember that I had a clear-out before Christmas and offered a stack of books for sale through www.infectedbooks.co.uk. The sale’s pretty much over now with just a handful of foreign language editions and a few copies of Straight to You left.

Everyone who bought books from the sale automatically got entered into a draw for a few special prizes. I’m pleased to announce that the winner was Alan Hickey from Lancashire, UK. Congratulations, Alan! The following goodies will be on their way to you shortly: 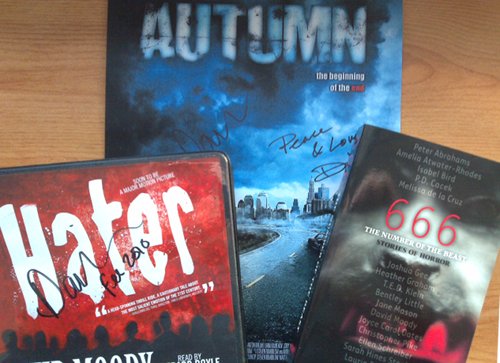 That’s a copy of the HATER audiobook on CD

(worth around £60!), a framed AUTUMN movie print signed by Dickon Tolson (who plays Carl) and myself, and a copy of 666: The Number Of The Beast

– a YA anthology containing a story of mine, Grandma Kelly.

Congratulations again, Alan! For those of you who missed out on the sale, don’t worry. I’m planning something similar for later in the year to coincide with the release of DOG BLOOD 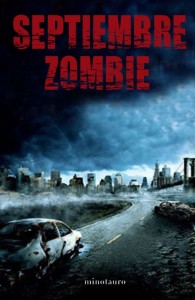 Spanish readers will be interested to know that Septiembre Zombie, the Spanish edition of Autumn, will be released by Minotauro on 23rd February.

Before you hit me with another thousand emails about the re-release of the Autumn books in English, here’s a little teaser for you. Book one, as you may know, will be released in September this year. The rest of the books, including the long-awaited debut of Autumn: Disintegration will follow VERY soon after. I’ll let you know exact dates as soon as they’re confirmed.

And by the way, if you were planning on picking up one of the spare copies of the Infected Books edition of Autumn I’ve been selling, you’d better get in quick. There are just a handful left. You can get them over at www.infectedbooks.co.uk.

Thanks to everyone who has already ordered books from my impromptu book sale. Some titles have already sold out and I seem to have spent more time in the post office than I have at my desk this last week!

I just wanted to say a couple of things…

At the end of 2009 (or when my stock of books is gone, whichever comes sooner) I’ll put the names of everyone who has made an order since the sale was announced into a hat. One name will be drawn at random and that person will receive:

Thanks again for your enthusiasm and your orders. To learn more, please visit www.infectedbooks.co.uk, and if you have any questions, contact me here.

Bit of an unusual post, this one… I’ve been clearing out my office and my attic and I’ve decided it’s time for a sale! In perfect time for Christmas (coincidence – honest!), I’ve found a few boxes of books which I’m selling off through www.infectedbooks.co.uk.

I acquired a small batch of copies of the original Infected Books edition of AUTUMN for the recent Grimm Up North festival, and I’m selling off the surplus. Please get in quick – this is absolutely the last time the book will be available before its re-issue through Thomas Dunne Books in the US and Gollancz in the UK in September / October 2010.

Also, whilst clearing out I discovered a couple of copies of the original Infected Books release of HATER and a box of hardcover copies of Straight to You. Those of you who’ve followed me for a while will know that whilst I still love the concept of Straight to You, I think the book has dated badly and I’m more than happy to let these copies go. I haven’t wanted to set a specific price for these rare editions (only 500 copies of the Straight to You hardback were ever produced, so this is about as rare as it gets for me!). I’m happy to accept any sensible offers based on how much having the books would mean to you.

I hope this is interesting to some of you. If you have any questions or you want any more information, don’t hesitate to get in touch. Use this page here to contact me.

I was thrilled to hear from Keenan at www.fwis.com who recently posted this commentary about the HATER cover. I’d been meaning for some time to put together a piece about the genesis of the cover so here it is! Thanks again to www.fwis.com.

The cover of ‘Hater’ has always been a strong selling point. When I designed the original ‘Infected Books’ edition back in 2006, I knew that I wanted something that was visually striking, relevant to the novel and, perhaps most importantly, something that didn’t look like the cover of any other book already on the shelves.

The idea for deep red on a clear white background came quickly. I’m by no means an artist so taking this approach seemed to kill two birds with one stone – if it worked it would be fairly easy to produce and the simplicity would inevitably make it an eye-catching design. After briefly toying with a few concepts (such as the bloody handprint on the back cover of the original edition and the imprint of a blood-drenched face looking as if some poor soul had been smashed up against a window!), I settled on simply writing the word ‘Hater’ in blood.

To produce the original artwork, I went back to basics. It was early summer and my youngest daughter was painting. Struck by sudden inspiration, I selfishly grabbed some of her paints off her (she didn’t have any red, so I mixed brown and orange and yellow and whatever else I could find), made up a batch of ‘blood’, then stood out on the patio surrounded by sheets of paper making bloodspots and the like. She watched me with an uneasy mixture of fear and bemusement. I felt like Richard Dreyfuss in Close Encounters, building a mountain out of mashed potato at the dinner table.

I dipped my finger in the paint and scrawled ‘HATER’ on a clean sheet. I liked it so I did it again. Then again. Then again. Half a ream of bloody Haters later and I decided that the very first one was the best. I dried it, scanned it, Photoshopped the colours to a more typically bloody red-brown, then created a composite using various other drips, dribbles and splashes of blood from my experiments on the patio.

The original paperback cover suffered from a poor choice of font for my name and too much white space. When the book was sold to Thomas Dunne Books, their art department worked for some time to come up with an alternative illustration, before settling on a touched-up version of my original design. They increased the proportions of the image to better fill the cover, and added my name and the words ‘a novel’ in a suitably bloody scrawl. 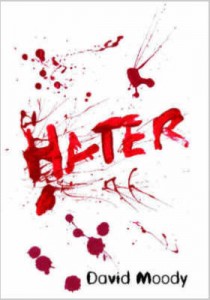 The book has since been sold to numerous other countries and it’s been interesting to see how each country has approached the design of the cover. Some, like Poland and the UK, have gone for variations on a theme.

The Spanish, German and French publishers have taken a completely different, but no less eye-catching, tack. The French edition in particular, with its use of an ‘interesting’ picture of yours truly, has become something of a talking point! With other countries including Brazil, Russia, Japan and Korea yet to unveil their editions of the book, I’m looking forward to seeing what their designers come up with!

The fact that the cover of ‘Hater’ has generated such a positive response is something I’m very proud of. Since the release of the book in February I’ve had many emails which have started along the lines of ‘I was in the bookstore today just browsing, when I saw the cover of your book on the shelf and had to pick it up…’. I’m also thrilled by the very positive comments posted in today’s article by the professional designers over at www.fwis.com. Perhaps my favourite feedback though, was from a post I found on a forum a while back. Someone admitted to having brought the book so they could carry it with them on the tube each day. They weren’t interested in reading it themselves, they just wanted to see the looks on other passengers’ faces when they saw the cover!

Congratulations to Zombob (aka Robert Banning of Carpentersville, USA) who was the winner of the exclusive My Favourite Books HATER giveaway. Robert – your copy of the original Infected Books edition of HATER will be on its way to you shortly.

I’ve been clearing out (more news on what else I’ve found later) and I’ve come across a few little gems hidden away. One of these ‘treasures’ is a mint condition copy of the original Infected Books paperback edition of HATER. For those who don’t know, the movie deal and the deal with Thomas Dunne Books came shortly after I originally released the book and very few copies of the Infected Books version were produced (no more than 1500, I think).

I’m giving the book away in conjunction with my friends over at the My Favourite Books blog. To enter, all you need to do is visit the site (click here) and send them an email before 31st May. Good luck!