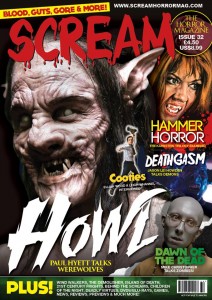 I owe my friends at SCREAM MAGAZINE an apology. I’ve been meaning to post for a while to let you know that issue 32 is out, but various things have conspired to get in the way and I’ve not had chance to put anything together until now.

As usual, this month’s issue is filled with great articles including a feature on the classic Hammer horror films THE VAMPIRE LOVERS

, LUST FOR A VAMPIRE

and TWINS OF EVIL

– known collectively as The Karnstein Trilogy. There’s something timeless and unique about Hammer movies. This box set is one of my prized horror possessions, and I’d recommend it without hesitation to anyone with even a passing interest in the horror genre. Required viewing.

Back to the mag and, as always, the team behind SCREAM have proved their horror credentials. Where else could you find an interview with Mike Christopher aka Hare Krishna zombie in George Romero‘s 1978 original DAWN OF THE DEAD

From the earlier days of the zombie sub-genre to the bang up to date. SCREAM 32 includes a piece on FEAR THE WALKING DEAD

which features interviews with Robert Kirkman and others. I recently watched the first episode of FEAR and was completely underwhelmed. if you’ve been watching, answer me this: should I stick with it?

To get hold of SCREAM, visit www.screamhorrormag.com. You can also pick up the magazine from any branch of HMV, Forbidden Planet, or any of the newsagents listed here. SCREAM is also available digitally as iSCREAM!