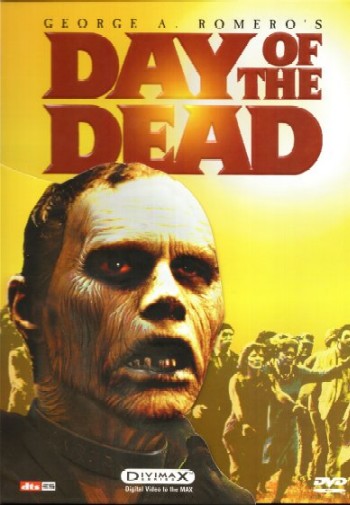 I have a huge list of post-apocalyptic films I want to write about here, but I don’t seem to ever get time to do it. It was early September when my ‘post-apocalyptic movie club’ last got a mention… there’s always something else needs doing first. But when someone else asks you to write about one of your favourite PA movies, the impetus is very different. A short while ago Wayne Simmons asked me to pick a  zombie film and write about it as part on an ongoing series on his site celebrating the US release of FLU and FEVER.

I chose one of my all-time favourite horror films: George A Romero’s DAY OF THE DEAD. Click here to visit Wayne’s site to read more.

You can catch Wayne and I on our last signing date of 2012 this coming weekend. We’ll be at Waterstones Swindon on 8th December. 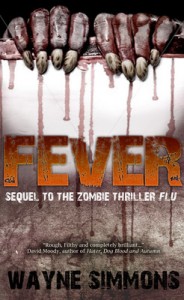 Many of you will already know Wayne. And you’ll know that I know Wayne too. He’s a good friend of mine and I’ve written before about his books FLU and DROP DEAD GORGEOUS. With DDG currently getting a long-overdue re-release through Snowbooks, Wayne’s in the middle of a blog-swap tour and today it’s his turn to visit here. You can find a post from me over at www.waynesimmons.org, but for now, here’s Wayne… 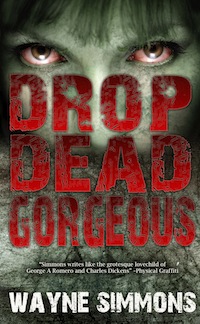 I’m a lifelong fan of horror, sci-fi and fantasy (or what we affectionately refer to as The Genre). For me, writing is just an extension of that fandom. Ever since my dad handed me a bunch of comics to read – mostly DC and Marvel titles, alongside Brit reads such as 2000AD and The Eagle – I’ve been hooked, a dedicated genre fan devouring books, movies, action figures, the lot.

As a fan, I try to write a story that I and other fans want to read. So, when planning my zombie horror novel, FLU, I thought first about what I myself enjoy within a good Romeroesque zombie story, whether it be a film, comic or book. I then tried to inject a little of those qualities into my own story. Of course, these are things that perhaps you too enjoy – the desolated cityscape, the zombie hordes, the gore and horror, the suspense. But I also really enjoy how Romero would use the zombie threat to examine human nature ie. the plight of our survivors; trust breaking down as the tension mounts; people backstabbing others to save their own skins etc.

With my latest release, DROP DEAD GORGEOUS, the survivors are the man focal point of the story. As the world suddenly ends, it’s their plight I focus on, their hopes and fears, the complexity of their relationships with each other. This is a story about people, about the living and how death (on such a mass scale) will affect them. How the masses of bodies decaying on the streets, in the bars and restaurants, offices and hotels, freak out those left behind. And how when some bodies refuse to decay, the survivors become even more unnerved…

I was reading a lot of Japanese horror writer, Koji Suzuki, while writing DDG. I was also reading mountains of zombie horror, such as my host today, David Moody, as well as other genre favs like Brian Keene and Bowie Ibarra.  I was watching zombie horror movies by the dozen, flicks such as Zach Snyder’s 2004 remake of Romero’s DAWN OF THE DEAD, and I was also devouring much of the Asian Horror cinema around at the time –  THE RING films, TALE OF TWO SISTERS, THE GRUDGE, DARK WATER etc. In a sense, then, DROP DEAD GORGEOUS is a blend of all the things I enjoy most within horror – the gore of zombie stories as well as the suspense and sheer creepiness prevalent within Asian horror cinema.

As a fan of The Genre, DDG was a dream project. To put my own unique spin on what I like best within contemporary horror is a wonderful thing. My only hope is that you too, fellow horror fan, will get a chance to pick up a copy of DROP DEAD GORGEOUS – that you’ll enjoy reading this spooky, brutal and emotionally charged story of mine even a fraction as much as I have enjoyed creating it. 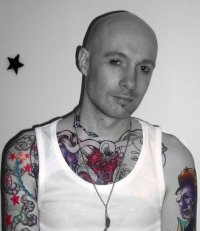 Belfast born, Wayne Simmons, has been loitering with intent around the horror genre for some years. Having scribbled reviews and interviews for various zines, Wayne released his debut horror novel, DROP DEAD GORGEOUS in 2008. The book was received well by both fans of the genre and reviewers alike.

An extended version of DDG has just been released through Snowbooks.

Wayne released his bestselling zombie apocalyptic horror novel, FLU, through Snowbooks in April 2010. In what little spare time he has left, Wayne enjoys running, getting tattooed and listening to all manner of unseemly screeches on his BOOM-BOOM Box… Meet Wayne online at www.waynesimmons.org.

Don’t forget: Wayne and I will both be at the SFX WEEKENDER tomorrow and Saturday. We also have a joint signing at WATERSTONE’S LEICESTER HIGHCROSS on Sunday 3pm – 5pm. Hope to see some of you there!

A quick plug for Wayne’s new book FLU, which is due out from Snowbooks this month. Wayne, as you may remember, is also the author of Drop Dead Gorgeous which I talked about a while back. 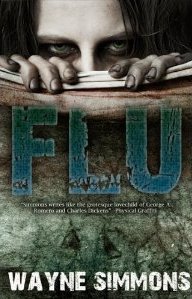 “There’s a nasty flu going round. An epidemic, they call it. The posters say to cover your mouth when you sneeze, and throw away the tissue. But such simple measures won’t stop this flu. Because when you catch the flu, armed police come and lock you in your house to die alone. When you catch this flu, it kills you in days. And when you catch this flu, two hours after it’s killed you, your eyelids snap open again…”Flu” is a pacey, terrifying, frighteningly real zombie horror story.”

FLU is available now from Amazon.co.uk

. For those of you who are in Northern Ireland, Wayne and I will be doing a book signing together on 1st May at the Queens Film Theatre in Belfast, prior to a 10pm screening of AUTUMN. More details about the event will follow shortly.