I’ve always been very grateful for the support of the THIS IS HORROR team, and I always enjoy chatting with Michael Wilson and Bob Pastorella. I’ve been fortunate to appear on their podcast on a number of occasions, and my most recent conversation with Michael and Bob is now available for your listening pleasure. We cover all kinds of stuff in this one, including CHOKEHOLD and THE BLEED (about which I’ll have exciting news very soon). Click here or on the graphic below to listen. 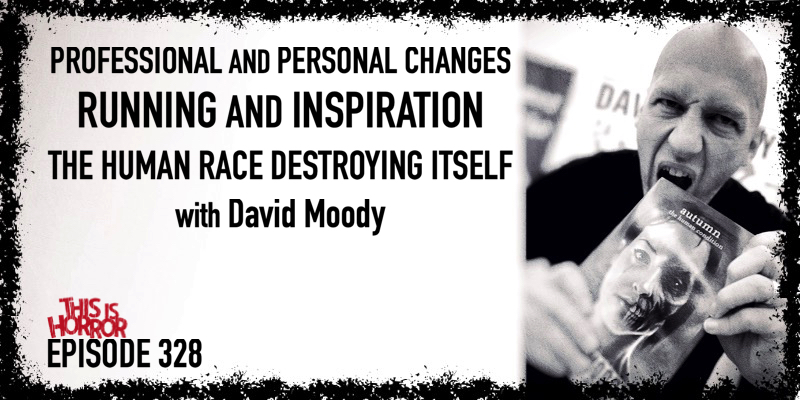 THIS IS HORROR release loads of great content on a regular basis. Please subscribe to the podcast and consider supporting them on Patreon.

Also, keep an eye out for head-honcho Michael Wilson’s soon to be released novella, THE GIRL IN THE VIDEO. It’s brilliant. 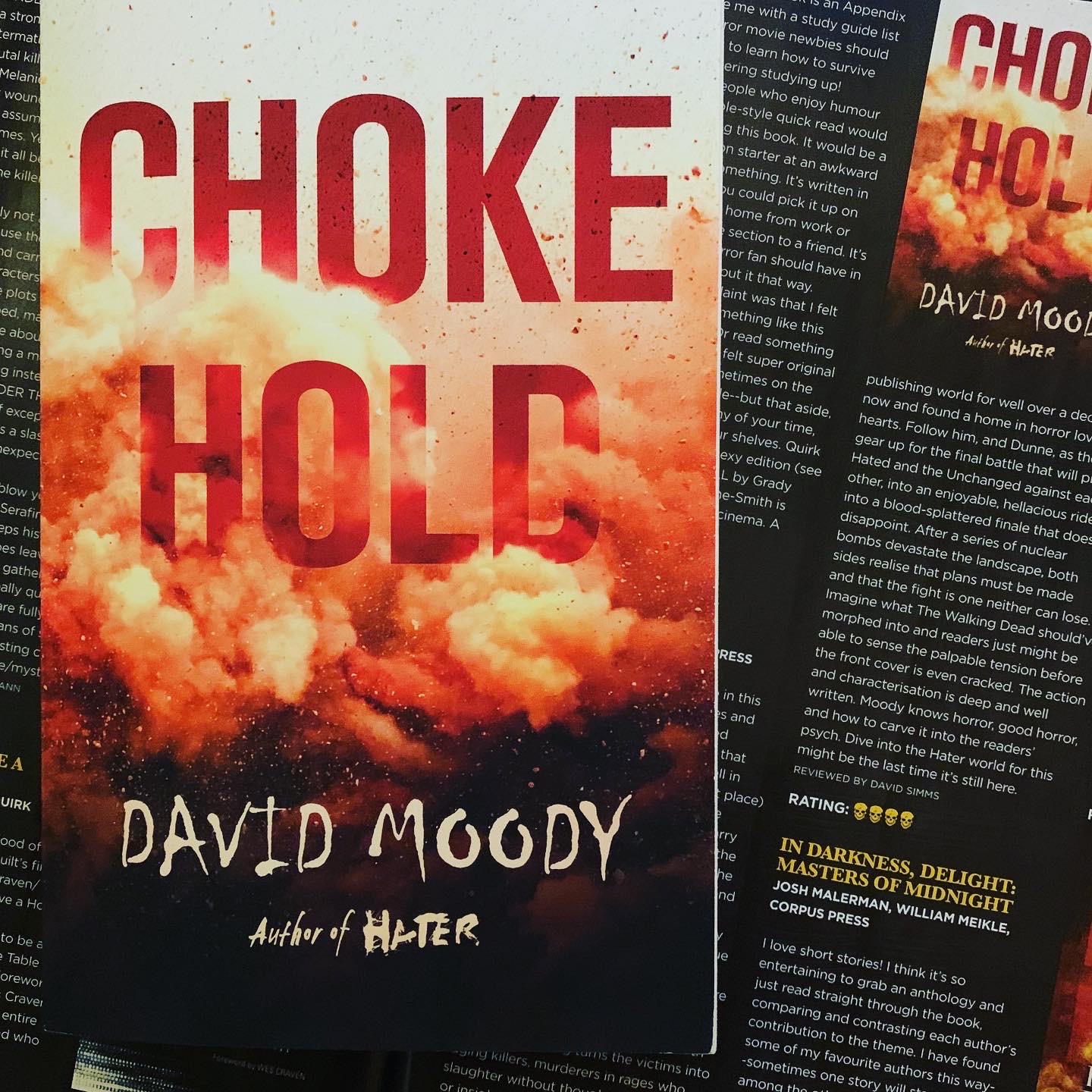 A couple of audio treats for you today. First off, I was really pleased to sit down and talk with my friends from This is Horror a couple of times recently. Available now is episode 313 of the This is Horror podcast, in which Chad Lutzke and I talk about independent publishing (and many, many, many other things). 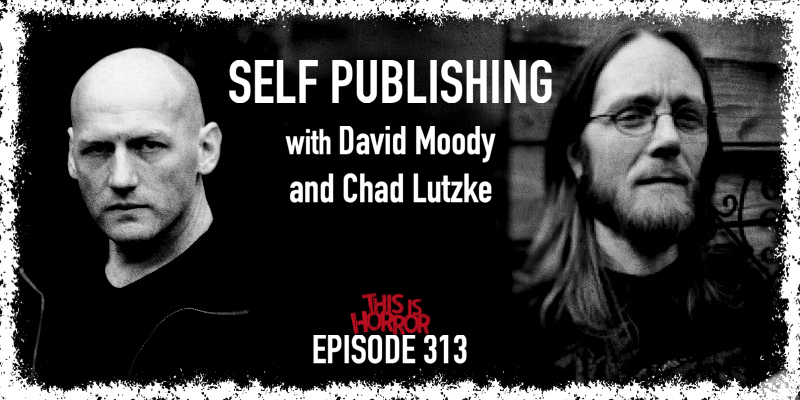 And if your ears can take more after such an aural battering, I wanted to remind you that the audiobook edition of CHOKEHOLD is now available from Macmillan Audio. It’s narrated by Gerard Doyle who, for his sins, has now voiced all six HATER audiobooks. His narration throughout has been superb, and I’m hoping to be able to ask him a few questions about his work on the two trilogies in the coming weeks. But don’t take my biased word for it, help yourself to a sample:

The full audiobook is available via Audible, Apple and Amazon. 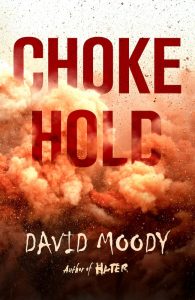 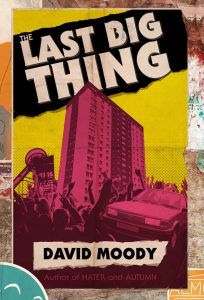 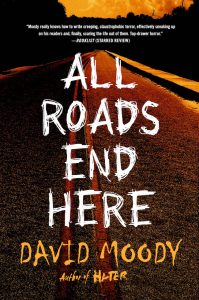 Well the new book has been out a few days and, as I expected, it’s polarising opinion (as have the other books in the series, to be fair). Some folks hated CHOKEHOLD (sorry, Starburst), while others really, really liked it – many thanks to Max at Geeks of Doom for his great review.

CHOKEHOLD is just as the name suggests: a story that viciously grabs ahold of you and will not let go, no matter how much you struggle. It is cutthroat, relentless, and — trust me when I say this — shockingly inspiring.

I had the pleasure of chatting to Jason Henderson at the Castle of Horror about the novel yesterday, and you can hear our conversation here:

All joking apart, the reason for the title of this post is quite straightforward. I don’t write the prettiest of books, and I don’t shirk away from taking my stories down grim pathways if they need it. In the case of CHOKEHOLD, much of it is necessarily bleak. I hope that readers will find some positives from the conclusion of Matt Dunne’s story. I think this final chapter is surprisingly uplifting and it sets the tone nicely for THEM OR US.

What do you think? Have you had chance to read CHOKEHOLD yet? I’d love to know what you think.

Today is my birthday, and it’s also the day that CHOKEHOLD hits the shelves. This book bridges the gap between DOG BLOOD/ALL ROADS END HERE and THEM OR US.

A series of nuclear strikes has left huge swathes of the country uninhabitable. It’s a level playing field now: both Hater and Unchanged alike have to fight to stay alive. Both have retreated to their camps to regroup, less than twenty miles away from each other.

It’s here that the last major battle of the final war will inevitably be fought, but neither side has any idea what’s waiting for them just around the corner.

Both armies are ready to fight to the death, each of their leaders hell-bent on victory. Their tactics are uniformly simple: strike first, get the enemy in a chokehold, then strangle the life out of them.

It’s very bleak, very bloody, and I hope you enjoy it! 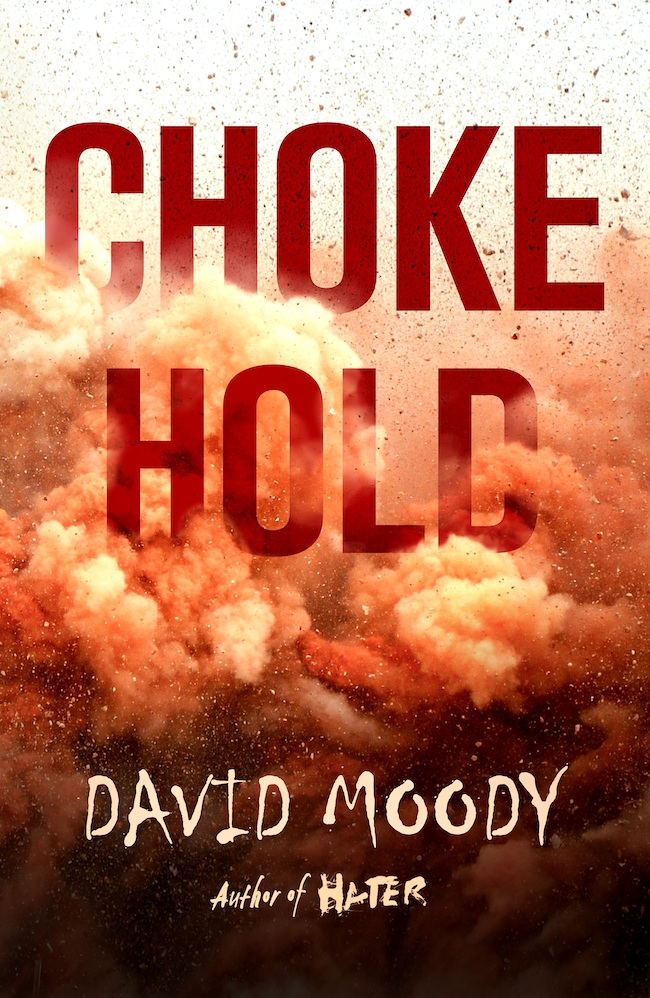 Just one week to go until CHOKEHOLD hits the shelves. Here’s the first chapter for you…

The first few enemy figures appear on the horizon, and the fighters lying in wait for them are desperate to engage, starved of conflict. It’s been too long. These fuckers have had it coming. These fuckers will be shown no mercy.

It’s taken weeks to get to this point. Every meter of mud has been fought for; every reclaimed centimeter of concrete and tarmac has been won at a cost. They’re not going to give it up now, not after all those sacrifices, all those lives lost. There’s no going back. It’s them or us.

Word of the approaching attackers spreads quickly along the front line, accompanied by a nervous tension that borders on excitement. Some of these men and women dare to dream that the bulk of the bloodshed is behind them now, that this is the last push of the final war. There’s an unspoken belief that each new bloom of violence will bring them closer to restoring some semblance of normality to what’s left of their lives.

The service station is accessed by a single road that splinters off what used to be one of the major routes into Cambridge. The main road had been midway through a massive, years-long rebuild-and-regeneration program when the war began, and here, alongside the services, lies the abandoned remains of a construction base the size of a small town. The fighters used the roadworks equipment to strengthen and fortify their position while secreting their armored vehicles and heavy weapons among the highway maintenance vans and flatbeds. Diggers were used to carve deep trenches at a distance from the main buildings, and the ballast, soil, and scree they excavated now protects the service station itself—great drifts of the stuff used to block access, strengthen walls, and camouflage metal and glass from view. Inside the building, the familiar plastic façades of long-gone restaurant chains and fast-food outlets remain, reminding people what they’ve lost. But the rawness of their pain is eased knowing that what they have here is more than almost everyone else.

Remember these little beauties? If you’ve been following my work since the early days, you might remember these bloody HATER t-shirts which were popular when the novel was originally released in 2009. Now, because lots of you have been asking, they’re back. Click here or on the image below for more details. 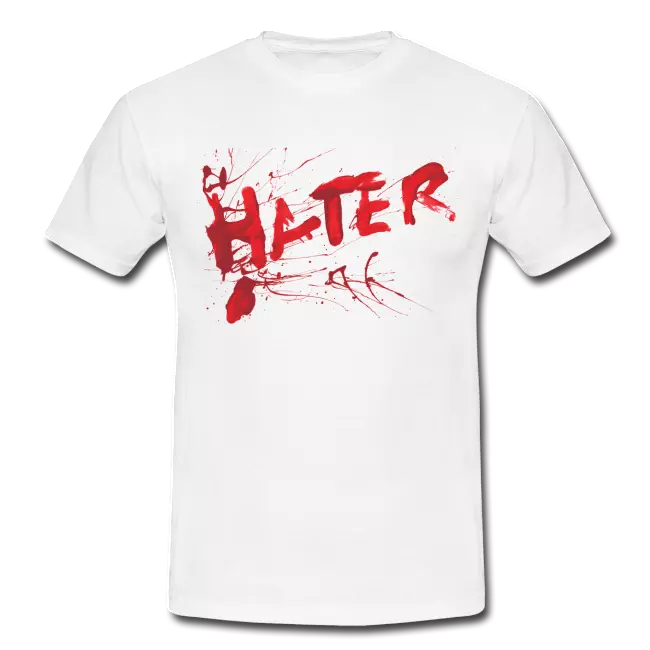 By the way, today marks two weeks until the release of CHOKEHOLD – the absolute final HATER novel. It’ll be published on 19 November by Thomas Dunne Books and will be available from all the usual bookstores and online outlets. You can also pre-order signed copies here.

I was sorry to hear about the death of Amazon’s Matchbook today. Matchbook allowed readers to get heavily discounted or free versions of the print books they bought from the site.

As a writer and a publisher, I believe in fairness and in not ripping off my readers. I think if you buy a print version of an Infected Books title, you should automatically get an eBook version too. Matchbook helped me to do that. But there is an alternative solution. Buy a signed copy of one of my Infected Books releases and you’ll be able to download an eBook version immediately. Conversely, if you’ve bought a digital version and you’d like a signed print version as well, you can let me know and I’ll discount the print book by the cost of the eBook you’ve already bought*.

To mark the death of Matchbook, and to make space for the delivery of CHOKEHOLD I’m expecting shortly, I’ve reduced the price of the beautiful hardcover edition of my most recent Infected Books release – THE LAST BIG THING – to under £10 for a limited time. 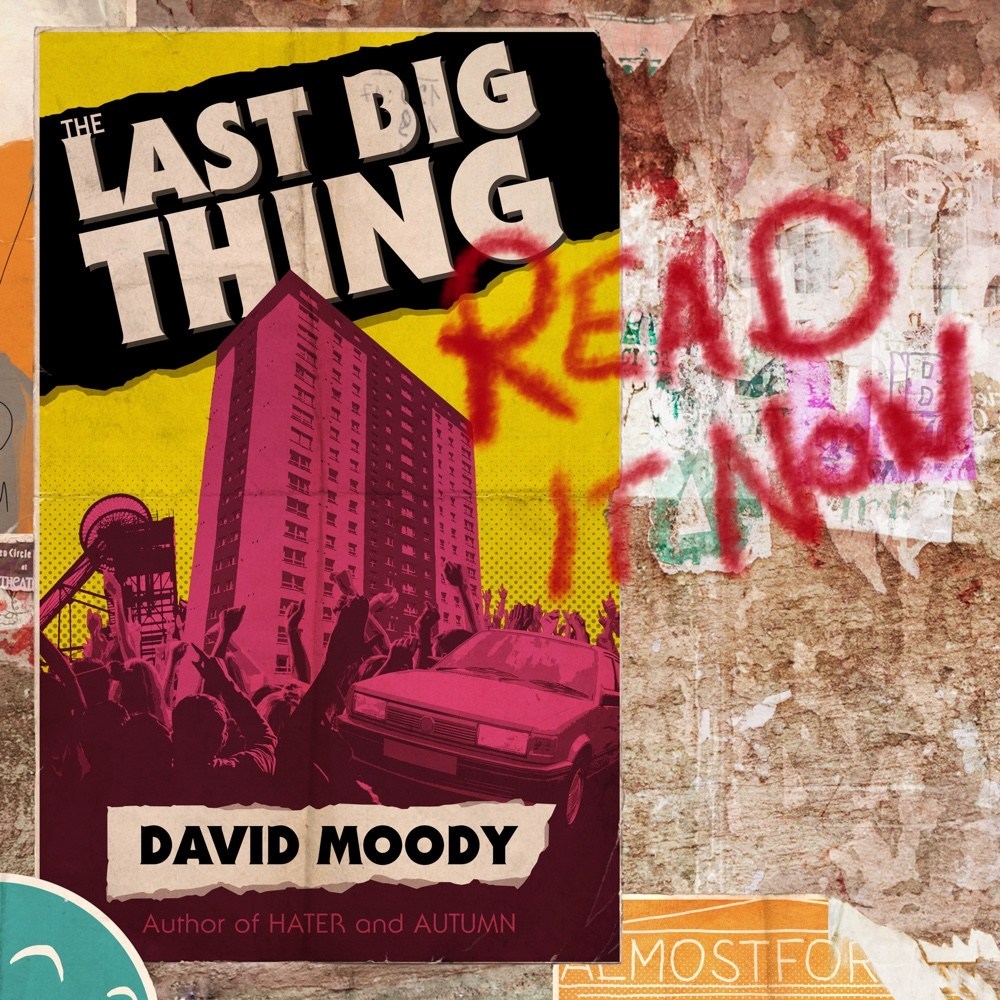 * terms and conditions apply – redemption required. Please note, this offer only applies to David Moody books published by Infected Books. A full list of titles and further information can be found here.

CHOKEHOLD – the final HATER novel – is released on 19 November. Print, eBook and audiobook versions will be available. As is customary, you can pre-order a signed copy directly from me. Click here or on the image below to find out more. 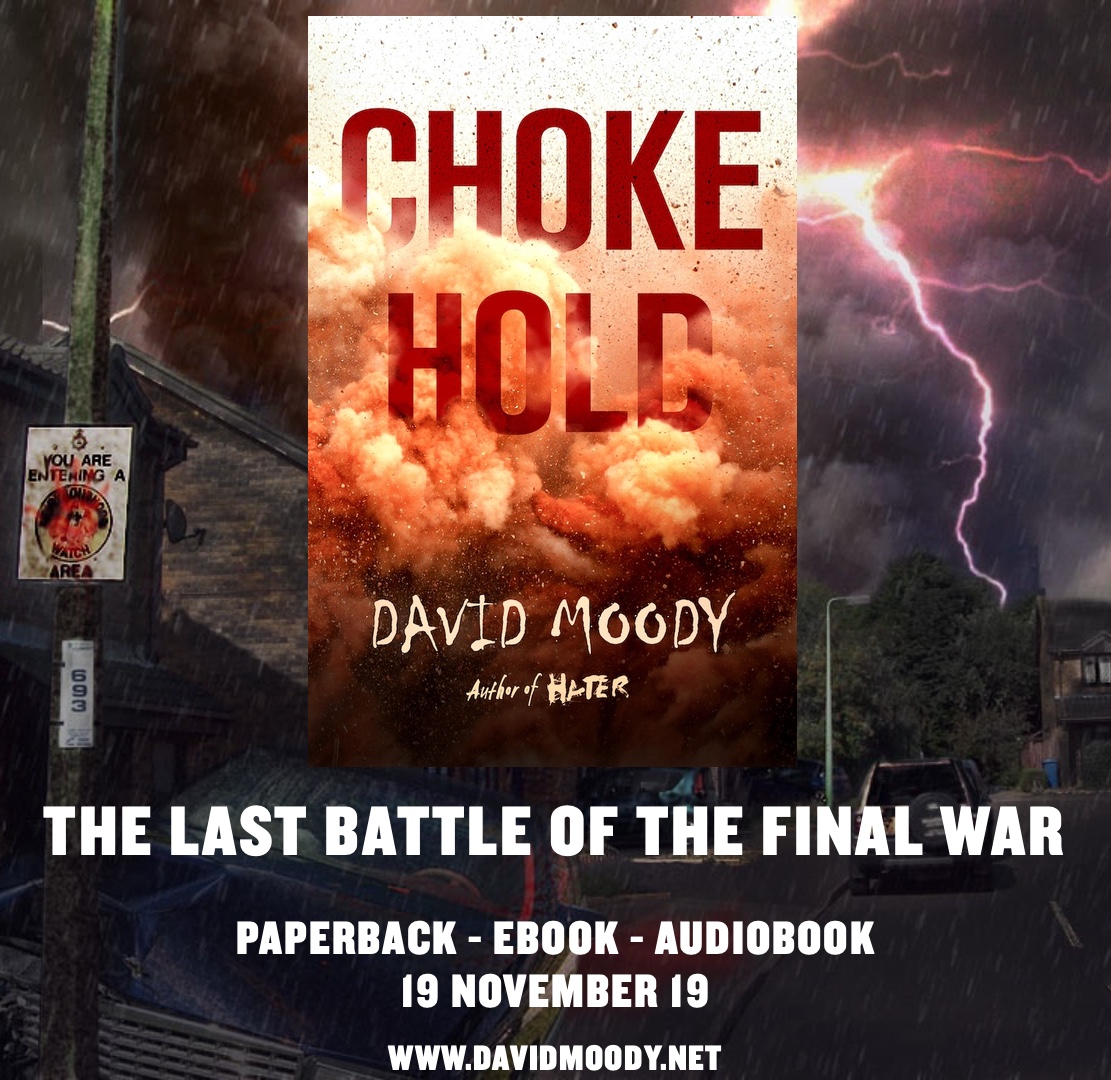 Pre-orders will be shipped as soon as possible (normally a few days before the official release date). The book is also available from all the usual outlets.