A quick reminder: I’ll be signing at Waterstone’s Cardiff on Friday 28th October with Wayne Simmons. We’re kicking off at 12:30pm, and hanging around for as long as we’re wanted! It’s always great to spend time with Wayne, and I’m looking forward to meeting up with some Welsh fans too.

And while I’m on the subject of appearances… don’t forget the Halloween Horror Night at Warwick Arts Centre this Monday evening. Adam Nevill, Gary McMahon and I will be reading from our books and discussing our work. It promises to be a great night. Click here for tickets and further details.

I’m absolutely thrilled to announce another great event for October, and this one promises to be a real cracker! On Halloween, I’ll be appearing at the Warwick Arts Centre for an ‘evening of terror’ alongside two excellent authors, Adam Nevill and Gary McMahon. The event will be chaired by Michael Wilson, editor of Read Horror. Tickets are £8.00, and are available here.

On the subject of upcoming appearances, I’m sorry to have to announce that due to circumstances beyond my control, I now won’t be appearing at the Aliens to Zombies convention in Los Angeles. I hope this doesn’t disappoint any of you who were planning to attend.

I’m off on holiday next week (providing the volcanic ash blows the other way), and I’ll be taking a stack of books to catch up with while I’m away. I’ve actually managed to get through a few books recently (unusual for me) and I thought it would be good idea to share some of them here over the coming weeks. First off, Adam Nevill’s The Ritual. 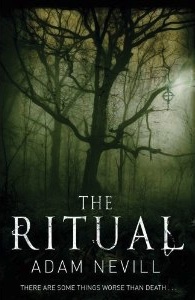 Four old university friends take a short holiday to escape from the pressures of their lives and rekindle fading friendships. As you’d expect, things don’t go to plan. A short cut proves to be anything but, with the men soon heading deep into inhospitable, uncharted territory. Tensions rise, but the group’s internal conflicts prove to be the very least of their concerns.

“And on the third day things did not get better. The rain fell hard and cold, the white sun never broke through the low grey cloud, and they were lost. But it was the dead thing they found hanging from a tree that changed the trip beyond recognition.”

I really enjoyed The Ritual. It’s a beautifully written book which has a deeply ominous and foreboding atmosphere from the outset. The initial premise may sound like by-the-numbers stalk and slash horror, but that’s far from the case. The story takes a few wild and unexpected turns. It’s a book of two halves, but both halves are wonderfully gruesome and unpredictable. Awesome.

The Ritual is out now in the UK, with a US release to follow in 2012. Moderately interesting fact of the day: Adam and I actually grew up within a couple of miles of each other, but it took our mutual US publisher in New York to get us talking. There must have been something unpleasant in the water in Birmingham forty years ago…