I need to start with an apology. I’ve had a few messages from folks wondering if everything was alright because I’d disappeared. It’s true. I’ve barely left a mark online recently. This iteration of my website has been running since 2008 – more than 1000 posts in total – and April 2022 was the first complete month I didn’t post anything in all that time.

There are a few reasons why. You might or might not be interested, but I’m going to tell you anyway. Some are more personal while others are writing related. I’ll apologise in advance for the length of this post, however I promise a picture of cats and big writing news if you make it all the way to the end.

On the personal front, it’s been a tough start to the year. I’ve mentioned previously that my mum passed away unexpectedly at the end of January, and it’s taken three months to get her estate in order and her house ready to put on the market. My dad and both of my wife’s parents passed away after illnesses of varying lengths, and they all had opportunity to get their affairs organised and say their goodbyes. Mum, however, decided to do things her own way. I believe that a quick and dignified death is often the best option for the person who’s reached the end of their life, but when my brother and I first went into Mum’s house after she’d died, it was as if she’d just nipped out to the shops: there was washing in the machine, her breakfast things not yet put away… She lived in that house for just short of fifty years and taking it to pieces – disassembling her long life and the home where we both grew up – has been tough.

And then came Covid. Jesus, that was not fun. I count myself lucky that I caught it at this stage after I’d been triple jabbed. It was the two-year anniversary of my heart attack mid-April, and I genuinely wonder if I’d caught Covid back then, whether I’d have recovered. I dodged it for two- and a-bit years, then it hit me for six. I struggle to understand how there are still conspiracy theorists and anti-vaxxers out there…

Which leads me nicely to the third reason I’ve not wanted to post much online – it’s just not a very nice place, is it? Social media has become a toxic cesspit of lies and disinformation, and if it wasn’t for the fact that it helps me keep in touch with friends and share my news (when I get around to it!), then I’d delete all my accounts. I love to learn, and I love to share opinions and debate issues with folks, but Twitter and Facebook etc is not where I want to do it. My brain struggles to process the fact that lying has become acceptable. I did a lot of recruitment in my old life – if I’d got wind of a candidate having been sacked for lying from a previous job, their application would have been thrown out at the first stage, no matter how good they purported to be. So how can these shysters be allowed to become presidents and prime ministers? I must be old school, but it’s beyond me.

It’s a real shame, because I do have things I want to share. You’ve made it this far into my post, so I’ll update you. This will be light on actual detail, I’m afraid, but I hope it’s enough to pique/keep your interest. Over the last 10 months or so my agent and I have been negotiating a new HATER deal. No official announcement has been made yet, but I just wanted you to know that things are moving in the right direction and the deal is DONE. This is big. Very big. Again, I can’t say much yet – suffice to say the project is back in the hands of some of the giants who initially optioned the first book back in 2008. I’ll tell you more as soon as I’m allowed.

And I’ve also been doing a lot of work while I’ve been away. The writing of AUTUMN: EXODUS is well underway. At the moment I’m looking at a November release. The book should be finished in the next couple of months, but a delayed release will allow me to make sure the book gets the launch it deserves, as well as allowing me to publicise INFERNO in the way I’d originally planned.

Which brings me back full circle, because the launch of INFERNO was hugely impacted by the personal matters I talked about at the beginning of this post.

BRIAN KEENE, who posts with admirably regularity and whose newsletter I enjoy reading every Sunday, has included copious cat pictures in the recent issues, and they seem to have gone down well with his readers. As a dubious reward for reaching the end of this post, I thought I’d share a picture of our cat brood. These three are the final reason I’ve not been able to post much. These days I can barely get to the end of a sentence without (top to bottom) Milo, Jasper, or Sydney flying at me from out of nowhere and landing on my keyboard. Seriously, if you come across a typo in any of my books, blame them! 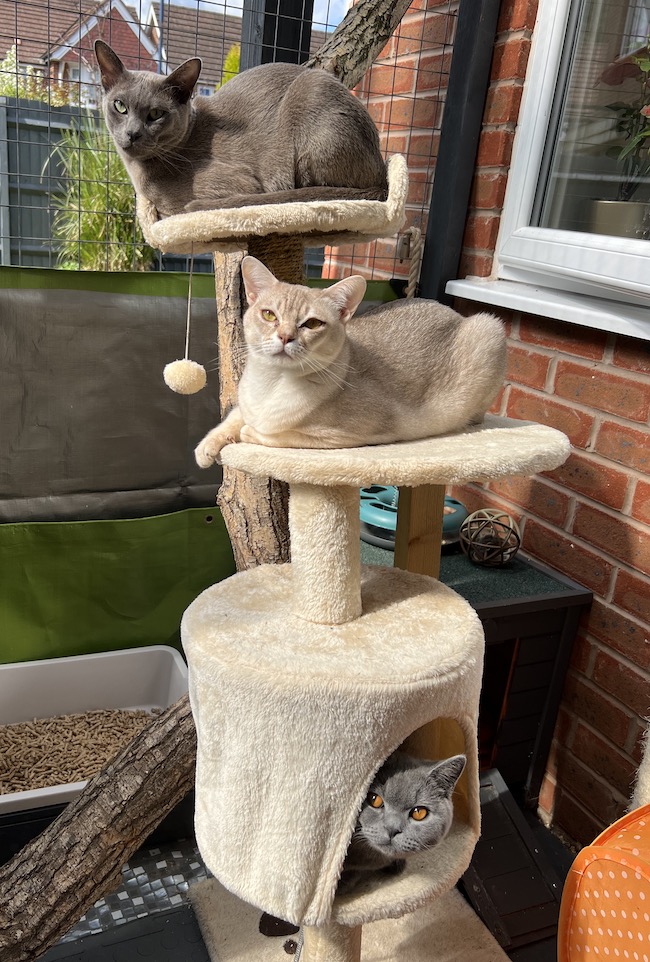 Thanks for bearing with me. More news coming soon.