Based on the acclaimed graphic novel by Alan Moore, V FOR VENDETTA has a phenomenal cast and a wealth of talent behind the cameras. Natalie Portman, John Hurt, Stephen Rea and Hugo Weaving (who delivers a superb performance despite the fact we never see his face) are consistently strong throughout, working from a script by the Wachowskis (the MATRIX trilogy). The film looks great, adapting David Lloyd’s graphic novel artwork sensitively. It doesn’t feel like your typical comic book movie (because it isn’t) – the film feels remarkably British, like a big budget TV crime show at times, crossed with Michael Radford’s adaptation of 1984. It’s a credit to the adaptation that even the more fantastical elements of the story feel grounded and plausible.

I make a point of not discussing politics in public. I use social media to tell people about my books, and I use my books to tell stories – my political views have little bearing on either of these things. The levels of intolerance on display right now make it particularly difficult to have sensible conversations about your political views with people who oppose them – it’s becoming as impossible to discuss objectively as religion. Everybody seems to think they’re right and many take it as a personal affront if you dare suggest there might be another point of view. Society feels increasingly polarised, to the point where I wonder if the divisions can actually be healed, or whether these splits are only going to deepen. Hey… that would make an epic six book horror series, don’t you think?! 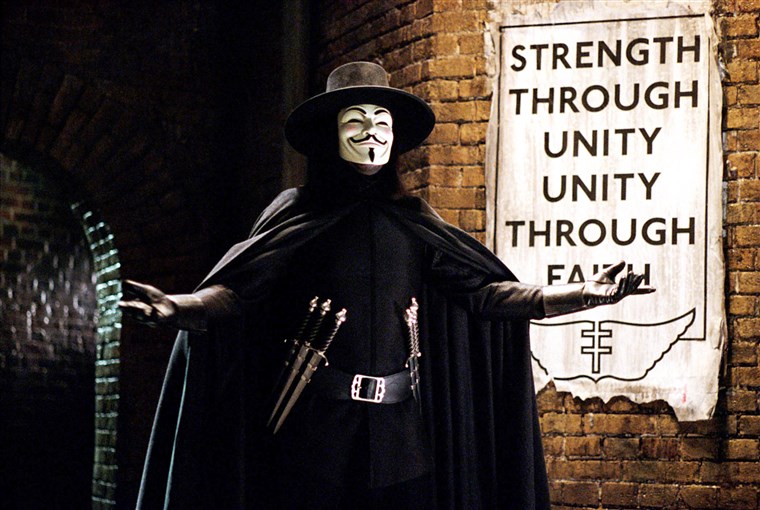 Regardless of where your loyalties lie, I think the current political environment contributed enormously to the impact V FOR VENDETTA had on me this time around. That, coupled with the fact the film includes references to an avian flu pandemic and I was watching on the eve of the second UK coronavirus lockdown made the story feel uncomfortably close to home. This is a story about the power of the state and the struggle for freedom, and it takes many cues from Guy Fawkes’s attempt to blow up the Houses of Parliament in 1605. V’s mask, styled on Fawkes and adopted by Anonymous and other groups, has become something of a resistance brand since the film’s release, and I guess that, more than a decade later, has added another layer to the relevance of the story.