BIRD BOX continues the great horror tradition of apocalyptic stories where the characters are deprived of one or more of their senses. Last year’s A QUIET PLACE deprived its characters of their voices, as was the case in my pal Tim Lebbon’s story THE SILENCE (a film adaptation of which is due to hit cinema screens later in 2019). You can understand why sensory depravation is such a fertile ground for horror – it leaves the characters immediately vulnerable and inevitably everyone watching can empathise: what would I do, how would I cope, how would I survive? John Wyndham’s classic DAY OF THE TRIFFIDS portrayed a world where almost the entire population is blind, but Malerman’s story ramps up the paranoia exponentially because his characters can see, they just can’t risk looking. And when you’re driving a car, looting a store, hurtling down rapids in a raft with your children blindfold, then the temptation to peer out would surely be unbearable.

There’s a top-notch cast and superb production values, with Sandra Bullock and John Malkovich delivering the goods. I was particularly impressed by the opening scenes and a wonderful sequence where the world deteriorates from relative normality to apocalyptic chaos in the space of a short car ride. Unfortunately, as is the way with many post-apocalyptic stories, the tension and horror of the initial event is difficult to sustain. Also, the split narrative, which works so well in the book, isn’t quite so effective on screen. That said, it’s still a thoroughly enjoyable watch which I’d recommend without hesitation. 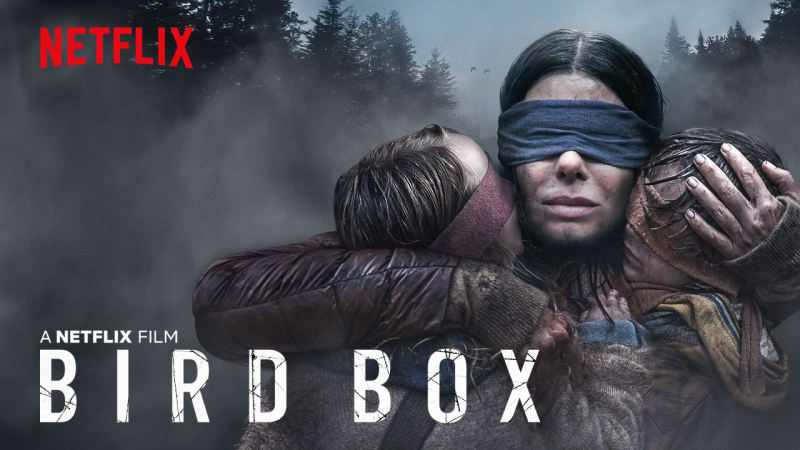 I’m pleased the movie adaptation of BIRD BOX turned out so well. I won’t lie, I far preferred the novel, but I think the success of the film bodes well for the horror genre in general. As you may have heard, a staggering 45 million Netflix accounts watched the movie in its first week of release. That’s incredible. It gives me a lot of hope for the forthcoming HATER adaptation. On the subject of which… I know I’ve been promising updates for a long time, but as I’ve learnt over the last decade, the film industry is a wild and curious beast and its behaviour is impossible to predict. The movie is still happening, and a lot of progress has been made over the last 12 months. Please be patient a while longer. It will be worth it. We’re further along the road than you might realise. I’ve recently read and commented on the script, and it has the makings of something very special. More soon.

Oh, and if you’re in the UK and you’ve already watched BIRD BOX but are looking for something else to watch on this first Sunday afternoon of the new year, can I please recommend BROS: AFTER THE SCREAMING STOPS which is available now on BBC iPlayer. It’s an extraordinary documentary which could be described as a SPINAL TAP for 2019 (if it didn’t happen to be a true story). One of the executive producers is a certain Ed Barratt, producer of HATER…

Tagged  A Quiet Place, Bros: After the Screaming Stops, Ed Barratt, Hater, John Malkovich, John Wyndham, Josh Malerman, Post-Apocalyptic Movie Club, recommended reading, Sandra Bullock, The Day of the Triffids, The House at the Bottom of a Lake, The Silence, This is Horror, Tim Lebbon.
Bookmark the permalink.
HTML Snippets Powered By : XYZScripts.com