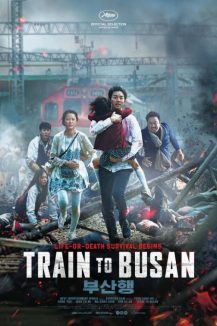 TRAIN TO BUSAN works for a number of reasons. The premise is simple. The location is suitably claustrophobic. The characters are thinly drawn but likeable (and dis-likeable) enough. Given the subject matter, it would have been easy for director and writer Yeon Sang-Ho’s film to have been a cliché-ridden mess, but it isn’t. The film knows its limitations, and its makers know what its audience wants. And they deliver. And unlike big-budget balls ups like the awful WORLD WAR Z

movie of a few years back, TRAIN TO BUSAN

doesn’t try to be anything more than it is, and that’s a breathless and exciting, action-filled suspense tale.

The infected in the movie are given surprisingly little focus. Clouded eyes, black spider veins, blood and drool – it’s nothing we haven’t seen before. The way they move is interesting, though, and their bizarre physicality give us a few genuinely unsettling scenes. But they’re never the focus, and are always secondary to the story. A couple of things illustrate the point I’m making here. First, have a look at the trailer again, eight seconds in. One of the main characters witnesses an attack, and it’s as indistinct and blurred for us as it is for her. Second, remember the Jerusalem Wall scene in the aforementioned WORLD WAR Z

debacle (remind yourself of that here). In WORLD WAR Z

this was a definite money shot – something the marketing team could latch onto and use ad infinitum in trailers and on posters, mugs and keyrings etc. etc. etc. There’s a very similar scene towards the end of TRAIN TO BUSAN

, albeit much smaller in scale, which works because it’s intrinsic to the plot and doesn’t appear as contrived as any of Brad Pitt’s zombie shenanigans. In fact, there are a number of other potential ‘money shots’ in TRAIN TO BUSAN

, many of which can be glimpsed in the trailer, and all of which compliment, rather than distract from the plot. 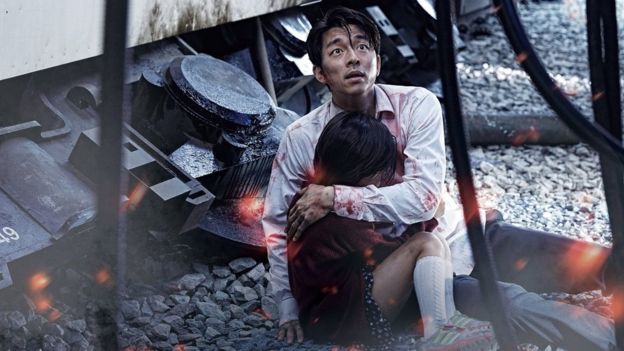 I think the set-up of this movie works really well. The movement of trains can be conducive to action movies like this: rhythmic, powerful and linear. You go where the tracks take you, and that’s not necessarily where you want, or need, to be. This adds to the tension, because until we get there, we’ve no idea what’s waiting for our cast of characters in Busan itself. There’s a sense of inevitability here, of helplessness and being out of control, which adds to the mounting unease. The characters themselves are pretty stereotypical and bland – the distant dad and his daughter who’s desperate for him to pay her more attention, the high-school baseball team, the selfish corporate bad guy, the funny chap with his pregnant wife… but this is all okay because, again, the characters’ individuality (or lack thereof) doesn’t distract from the tension and the direction of the film.

All in all, I thought TRAIN TO BUSAN

was a top quality action flick which just happened to feature zombies. Is it a ground-breaking zombie film? No. Does it bring new and original ideas to our precious zombie sub-genre? Not really. Is it a good way to spend two hours of your time? Absolutely. This is a really well-made and breathlessly exciting film which I recommend without hesitation.

TRAIN TO BUSAN is available on bluray now.