I can’t believe we’re already announcing the last but one YEAR OF THE ZOMBIE novella. This year has flown past. Our latest author is a real sick b*stard. It’s an honour to introduce MATT SHAW

with his story, ONE OF THEM. 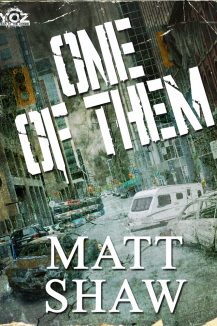 The zombie apocalypse has brought the world to its knees. All the survival plans have been tried, but nothing’s worked. Our world has been taken over by Them – sick, diseased creatures which exist with the sole aim of spreading their infection until none of us are left alive.

But even in this dystopian hell, fate deals some surprising hands.

Loner Bob was ready for the end days. His house is strong and he has supplies enough to last him a while. When he finds Andria, though, the woman who cared for his father in the rest home during the final days and weeks of his life, he sees an opportunity to repay the kindness she showed his dying dad. It’s the very least he can do.

It’s a no brainer. There’s safety in numbers. After all, it’s the end of the world, and survivors should stick together when times are tough like this… shouldn’t they?

ONE OF THEM is available now from Amazon.com, Amazon.co.uk and Amazon.de.