My first film recommendation of 2016 and wow, what a belter I have for you today. David Michôd‘s THE ROVER

is a bleak and surprising dystopian tale which features a superb performance from the ever-reliable Guy Pearce. Watch the trailer and click the link below for my thoughts.

10 years after a global economic collapse, a hardened loner pursues the men who stole his only possession, his car. Along the way, he captures one of the thieves’ brother, and the duo form an uneasy bond during the dangerous journey.

So far so cliched, right? Wrong. This is a movie which caught me completely by surprise. Pearce is on top form here as a broken man who’ll stop at nothing to retrieve his stolen car. Set in the Australian outback, the movie naturally lends itself to the inevitable MAD MAX

comparisons, but anyone who thinks that is way off the mark. This is something else entirely. 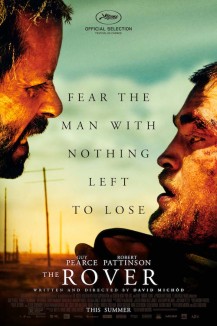 I loved the look and, more particularly, the feel of THE ROVER

. The backstory is rightly sparse, and all we know is that the film takes place ten years after a global economic collapse. Whilst most dystopian movies take place either as the shit is hitting the fan or once it’s well and truly dropped, THE ROVER

seems to exist in an unsettling nether-land between the two. There are glimpses of civilization and of society continuing to function, and yet there are far more telltale signs that the end really is well-and-truly nigh.

look like a children’s entertainer), is ably supported by Robert Pattinson, doing all he can to shed the TWILIGHT SAGA

poster-boy image which initially propelled him to stardom. Pattinson is great as the abandoned brother of one of the gang who stole the car – a frightened, wide-eyed survivor with learning difficulties whose innocence seems out of place in this unforgiving landscape.

Excellent direction, subtle effects, an atmospheric soundtrack, beautiful cinematography and a superb ending I didn’t see coming combine to make this a film I’d recommend in a heartbeat.

is available on DVD

and Bluray now. It’s also streaming on Amazon Prime in the US and UK.