An American Werewolf in London (and my regular Scream Magazine plug) 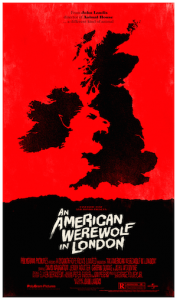 There are some films you can watch over and over and never get bored of. They’re timeless classics – as close to perfection as you can get. They’re the kind of films that make you recoil in terror whenever anyone dares mention remakes, because there’s absolutely no point. AN AMERICAN WEREWOLF IN LONDON

is one of those films.

I’m taking the opportunity to write about it now because a). it’s one of my absolute favourite movies and b). it’s heavily featured in the latest edition of SCREAM magazine. I’m sure you’ve already seen it (if not, why not?), but here’s a quick summary courtesy of IMDB and a trailer (which was produced for the bluray release a few years back, and which completely fails to capture the atmosphere of this most atmospheric film). Click the link below for my thoughts.

(By the way, check out the stunning Olly Moss poster I found online. It’s a thing of beauty.)

Two American college students are on a walking tour of Britain and are attacked by a werewolf. One is killed, the other is mauled. The werewolf is killed but reverts to its human form, and the local townspeople are unwilling to acknowledge its existence. The surviving student begins to have nightmares of hunting on four feet at first but then finds that his friend and other recent victims appear to him, demanding that he commit suicide to release them from their curse, being trapped between worlds because of their unnatural deaths.

There’s so much to love about AAWIL that I don’t know where to start. I’ll keep this recommendation brief because instead of reading this, you could watch the movie instead. If you’ve already seen it, you could watch it again. For a movie made more than thirty years ago, it’s barely aged.

But no mention of the movie is complete without giving credit to make-up master Rick Baker, who won the first Academy Award for best make-up for his work here. In these days where CGI enhances everything, it’s hard to remember the impact of the key transformation scene on show here. Shot in full view in bright light, it’s an extraordinary achievement which truly raised the bar. I’ve embedded a clip below. Equally impressive is Griffin Dunne as Jack in various stages of decomposition. 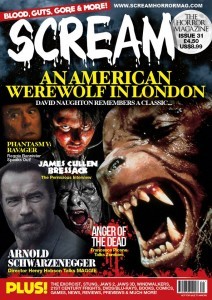 AAWIL is required viewing for all self-respecting horror fans, and that’s all there is to it.

So now I’ve said my piece, may I respectfully draw your attention to the latest issue of SCREAM magazine? As usual, it’s full of great articles including a comprehensive 7 page retrospective on AAWIL and an interview with star David Naughton who looks back on the making of the film. There’s plenty more in this month’s issue too, including an interview with Henry Hobson, director of the Arnold Schwarzenegger-starring MAGGIE (which I’ll be recommending in a future post – well worth checking out), and a feature on the upcoming and long-awaited fifth PHANTASM

Visit www.screamhorrormag.com, or pick up the magazine from any branch of HMV, Forbidden Planet, or any of the newsagents listed here. SCREAM is also available digitally as iSCREAM!