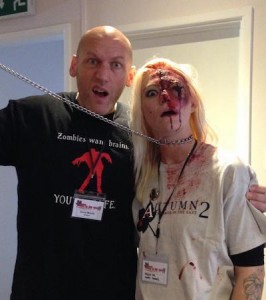 I’ve had the pleasure of taking part in a couple of excellent events over the last few weeks (and my final appearance of the year is coming up this Saturday…). First was TALES AND TASTES 2 at the Delish Deli and Kitchen in Rugby on Halloween. It was a brilliant night, where I found myself sandwiched between SARAH PINBOROUGH and JOSEPH D’LACEY. A genuinely warm and appreciative crowd, generous and accommodating hosts, great food and drink… what more could we ask for? Click the link below for a few pictures.

Last Saturday saw the third annual HORROR IN THE EAST convention in Lowestoft, the UK’s most easterly town, and the setting for the final book in the HATER series, THEM OR US. It’s always a great event, but it’s a real shame it never seems to draw the crowds it should. Honestly, folks don’t know what they’re missing. I can show you, actually – visit the Videos page on this site to watch me, Adam Millard, Iain McKinnon and others on the panels from both this year’s event and the 2013 con.

Thanks as always to the organisers (Gary and Claire at Delish, Emma and Jo in Lowestoft), and to all those folks who came out to support the events. Hopefully I’ll see some of you this weekend at Zombie Ed’s annual celebration of all things zombie – the DAY OF THE UNDEAD in Leicester.

Met @davidjmoody today at #horrorintheeast – he's a real gentleman. Got to sit on a panel, too. Chuffed. :) pic.twitter.com/sqQQqg2569