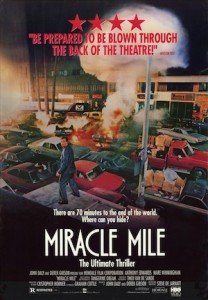 Quite a weird movie for this week’s recommendation. MIRACLE MILE (1988) is one of the strangest films I’ve seen in quite a while. It’s an almost surreal mix of genres: love story, thriller and comedy for starters, with a healthy dose of added paranoia. Here’s the synopsis and trailer. Click the link below for my thoughts.

A young man meets and falls in love with a young woman at the La Brea Tar Pits in Los Angeles. This area is known as Miracle Mile, and the whole movie takes place there. They make a date, which he misses, and while he is searching for her, he accidentally finds out that we (the United States) are about to start a nuclear war with the Soviet Union. He frantically searches for her so that they can escape Los Angeles.

MIRACLE MILE has a fascinating premise: imagine the best thing that ever happens to you, happening on the worst day of your life. Musician Harry falls head over heels in love with waitress Julie but, through no fault of his own, sleeps through his date. Whilst searching for her in the middle of the night, he answers a phone box call – it’s a wrong number, but the caller has terrifying news.

Way, way back when I first started adding these film recommendations to this site, I talked about TAKE SHELTER – a wonderful movie with an unforgettable central performance by Michael Shannon as a man who is either a). completely insane, or b). genuinely aware that the world’s about to end. For me, the beauty of TAKE SHELTER was not knowing which way the story was going to go until the final scenes. Although nowhere near as powerful or well made, MIRACLE MILE holds a similar fascination.

The film has a distinctly unusual vibe about it with its cheap-looking, late eighties visuals and unforgivable fashions. And the look of the movie just serves to further compound its overall strangeness. For me it felt like an uncomfortably familiar nightmare – one of those disorientating, spiralling fantasies that you know doesn’t make a whole lot of sense, but which becomes undeniably terrifying. With much of the action taking place in the middle of the night, there’s an emptiness and calm which feels unsettling because you know, one way or another, it’s not going to last. It’s like the story takes place in our world, but not quite our world.

To say much more would spoil the film for you, so I won’t. Please just hunt down a copy and watch it for yourself. I’d be really interested to hear your thoughts. Get the movie on DVD/VOD here.