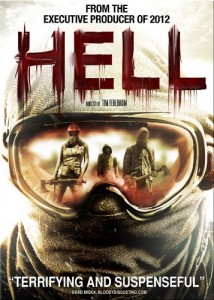 HELL (2011) came to me courtesy of a long-time supporter of my work from Germany (thanks again, Jochen!). It’s a low budget German movie which gained a lot of attention because the executive producer was Roland Emmerich (Independence Day, The Day After Tomorrow, 2012 etc.). But if Emmerich’s overblown, Whitehouse destroying blockbusters aren’t your scene, then you’ve come to the right place, because HELL is about as far removed from those kinds of movies as you can get.

I was immediately drawn to the film because of the basic premise. At first glance it sounds like a similar kind of set-up to STRAIGHT TO YOU:

“It was once the source of life, light and warmth. But now the sun has turned the entire world into baked and barren wasteland. Forests are scorched. Animal carcasses line the roads. Even the nights are dazzling bright. Marie, her little sister Leonie and Phillip are heading for the mountains in a car with covered windows. Rumor has it there is still water there. Along the way they run into Tom, a first-rate mechanic. But can they trust him? Tension grows in the small group. As if things weren´t bad enough, they are lured into an ambush. Their real battle for survival begins…”

Watch the trailer (ignoring the awful English dubbing), then click the link below for my thoughts.

I thought HELL (which is also the German word for bright, incidentally) was a good film, but not a great film. Certainly the visual style really hooked me in from the outset: I watched it almost immediately after writing, releasing and promoting the new edition of STRAIGHT TO YOU. Director Tim Fehlbaum and his crew evoke the setting of a permanently sun-scorched Earth beautifully. Particularly effective, I thought, were the scenes with our three mains in their car – cardboard taped over the windows, narrow slits for them to see outside, stifling heat and lung-invading dust. I really enjoyed the opening third of the film, in fact, as the survivors head for the mountains and the promise of water. But the movie takes a tonal shift later on, and I think it suffers as a result. 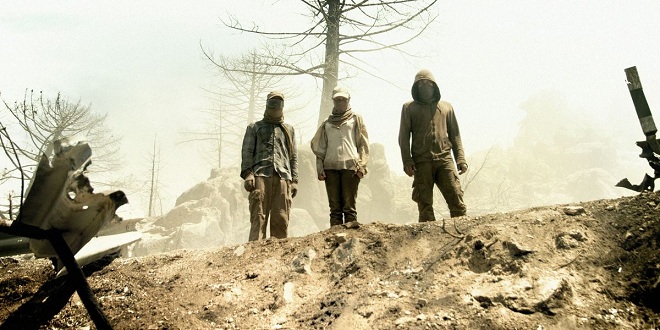 After the ambush mentioned in the synopsis above, the survivors find themselves at the mercy of a large family who have somehow managed to stay alive against the odds. And from here on in, the pace of the film changes. It reminded me of a watered-down version of the incredibly brutal French movie FRONTIÉRE(S) (which I’ll cover in a future post here). That’s no bad thing, and it’s reasonably effective and enjoyable to watch, but I found it a disappointment after the promise of the opening section. After setting up something quite unique from the outset, the story veers into all too familiar horror movie territory.

Despite this, I’d definitely recommend tracking down a copy of HELL and giving it a spin. Strong performances, great production values and a really interesting premise make it well worth your time. It’s widely available on DVD and Bluray. And, of course, if sun-scorched apocalypses are your kind of thing, you could always pick up a copy of STRAIGHT TO YOU too…!