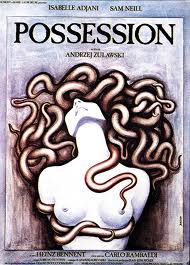 Back in February last year I wrote about my excitement at the relaunch of Starburst Magazine. For much of the 1980’s, Starburst and Fangoria were my only sources of horror-related news. One issue I remember particularly vividly featured picture of a bizarre tentacled creature from Polish director Andrzej Zulawski’s 1981 movie, POSSESSION. Of course, it was impossible to get to see the film back then – not just because I was only 10 years old, but also because it was categorised as a video nasty and whipped off the shelves here in the UK. In fact I only got to see the film earlier this year, and I’d been meaning to write about it here as part of my Post-Apocalyptic Movie Club. Possession is released on blu-ray in the UK next week, so this seemed an ideal time to feature it. If you haven’t yet seen this bizarre, haunting, disturbing film, I think you should. Watch the trailer and click the link to find out why. 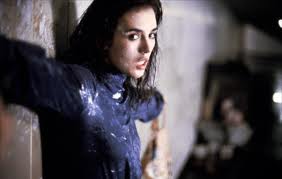 Sam Neill and Isabelle Adjani star as a married couple, Mark and Anna, who live in West Berlin with their young son. Mark returns home after a work posting and discovers that Anna is leaving him, though she insists there is no one else involved. Mark leaves the marital home, only to return some days later to find his son alone and uncared for. Mark takes a phone call from a man called Heinrich who purports to be Anna’s lover, who says she is with him. Mark meets his son’s teacher (also played by Adjani) who, whilst identical, appears to be the antithesis of his wife: calm and dependable. After Anna returns to the flat and mutilates herself with an electric carving knife, Mark employs a private detective who follows her to a squalid apartment she shares with… well, I’m not going to tell you who or what she shares the apartment with – you should discover it for yourself. 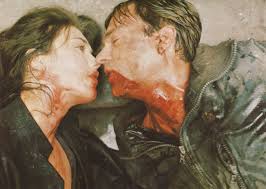 POSSESSION is an astonishing film. It defies description and is, at times, harrowing viewing. Beautifully made, Zulawski makes excellent use of his West Berlin locations, even featuring the wall which divided the city and its people back then. Special effects are used sparingly and are provided by Carlo Rambaldi, the genius responsible for creating Spielberg’s ET as well as the xenomorph from ALIEN and the creatures from David Lynch’s DUNE amongst others. An eerie electronic score by the director adds to the uneasy vibe which permeates the movie.

But the real triumph of the film is Isabelle Adjani’s dual performance. She’s remarkable, the focus of every scene she appears in, and it’s easy to see why this performance earned her the best actress award at Cannes in 1981. Of particular note is a startlingly physical sequence where she suffers a miscarriage in a subway. Really astonishing.

Looking back at the this film now, it’s easy to see why the BBFC categorised it as a video nasty. It’s unpleasant viewing for sure, but it stands head and shoulders above most of the other 70+ films which were banned at the time. It’s a remarkable movie, very hard to describe (which is why I’ve made little attempt to do so here), and it’s great to see it finally getting such a high quality release. Reminiscent of Lynch’s ERASERHEAD and early Cronenberg, POSSESSION is highly recommended.